If you’re a high-ranking person in the film industry, this time of year must feel like Christmas come early. There’s already been plenty of award shows and the BAFTAs and Oscars are just around the corner.

Of course, it’s one thing to honour those who’ve worked on this year’s biggest films, but what about overall achievement? Well, fear not, there are awards shows for that too.

One such award is the American Cinematheque Award. Past winners include Steven Spielberg, George Clooney, Nicole Kidman, Al Pacino and Ridley Scott.

This year the award will go to Amy Adams.

According to their statement, Adams, the sixth woman to win in 31 years, was a unanimous choice. Rick Nicita, American Cinematheque Chairman said of Adams:

“The American Cinematheque is extremely pleased to honor Amy Adams as the 31st recipient of the American Cinematheque award at our celebration this year. “Amy Adams is one of the most beloved, admired and respected actresses in movies today. Her credits range from critical favorites like American Hustle and Arrival to blockbusters like Enchanted and Man of Steel, combining strong reviews and commercial success. Her appeal crosses all demographic groups and she continues to broaden her audience with performances that illuminate her movie-star qualities… In the words of one of her directors, she is smart, tough, funny, warm, ambitious and, of course, beautiful. Combined with her shining talents and unequalled likability in a career that is skyrocketing, Amy Adams is the ideal recipient of the American Cinematheque’s 31st annual award.” 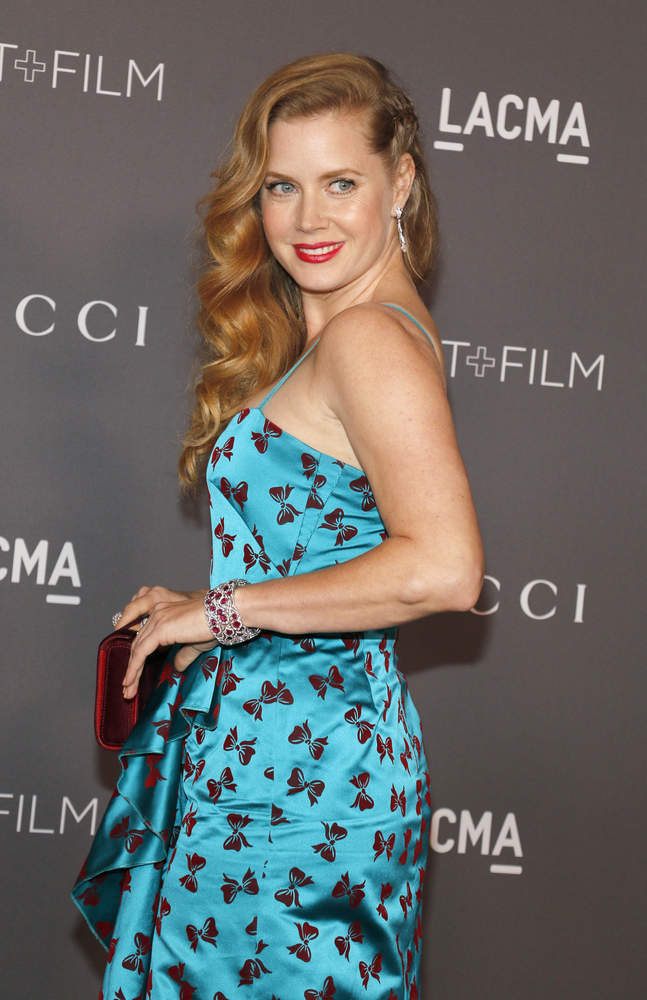 What is the American Cinematheque Award?

Each year the American Cinematheque Board of Directors choose “an extraordinary artist in the entertainment industry who is fully engaged in his or her work and is committed to making a significant contribution to the art of the motion pictures” to receive the award.

The award presentation will be a private ceremony on 10th November at The Beverly Hilton in Beverly Hills, CA. Jake Gyllenhaal, Tom Hanks, Chris Messina, Dermot Mulroney, Natalie Portman, Justin Timberlake and Kristen Stewart and Dennis Villeneuve will be at the benefit event to toast Amy Adams on her honour.

There is a long list of co-chairs of the event. These include Ben Affleck, Cate Blanchett, Casey Bloys, Bradley Cooper, Spike Jonze, Jeffrey Katzenberg, Jeremy Renner, Ted Sarandos, Deborah Snyder, Zack Snyder, Steven Spielberg, Denis Villeneuve and Paula Wagner. It seems likely that many of those major names will attend as well.

Tickets for the event are charged at $600, although patrons can pay up to $75,000. The evening will consist of a black tie dinner followed by the award presentations.

The money raised by the benefit event goes towards American Cinematheque’s non-profit film exhibition. This exhibition has programs throughout the year. They also operate the historic Egyptian Theatre on Hollywood Boulevard as well as the Aero Theatre in Santa Monica.

Who is Amy Adams?

After breaking into the mainstream in Catch Me If You Can with Leonardo DiCaprio, Adams occasionally struggled for parts. Eventually, it was the 2005 independent film Junebug that pushed her back into the spotlight. Adams played the chatty pregnant Southern belle, Ashley Johnsten, the film’s standout role.

After plenty of awards-season buzz around that film, including an Academy Award nomination for Best Supporting Actress, Adams career got back on track.

Her next noteworthy success was as Princess Giselle in Disney’s Enchanted. The film saw the animated princess accidentally end up in real-world live-action Manhattan, struggling to adjust to her new reality. Enchanted was essentially a romantic comedy in the form of a satirical look at Disney’s movie catalogue. It won the hearts of fans all around the world and impressing critics too. They cited Adams’ role as the film’s highlight.

Adams went on to take critically acclaimed roles in Sunshine Cleaning, Miss Pettigrew Lives For A Day, and Doubt. Eventually tiring of playing naive women, Adams began to branch out. She took roles in The Master opposite Phillip Seymour Hoffman, DC Comics’ Man Of Steel, American Hustle, and Nocturnal Animals.

The most recent major success for Adams came in the form of Arrival. She led the cast as Louise Banks, a linguist (played by Adams), who experiences strange visions when she is hired by the American government to interpret the language of extraterrestrials. After taking the role due to the intellectual nature of her protagonist, she won dozens of accolades for her performance. Adams had nominations for Best Actress at both the BAFTAs and the Golden Globes. Many journalists remarked with indignation on the fact that she did not receive an Oscar nomination for the part.

She has four upcoming projects, including a biopic on former-president Dick Cheney.

The American Cinematheque Award isn’t the only award either. There is also the Sid Grauman Award. This is presented to “an individual who has made a significant contribution to the Hollywood film industry in the continuing advancement of theatrical exhibition.”

Past winners of the Sid Grauman award have included co-founder and CEO of DreamWorks, Jeffrey Katzenberg, and President of Worldwide Marketing and Distribution for Warner Bros. Pictures, Sue Kroll.

“The American Cinematheque is pleased to present this year’s annual Sid Grauman award to Richard Gelfond and Greg Foster on behalf of IMAX for their outstanding contribution to theatrical exhibition. Their leadership of IMAX has resulted in a breathtaking expansion of not only box office grosses around the world but in a quantum leap forward for the excitement and enjoyment of the moviegoing audience. There is no better way to see a movie than on the big screen and IMAX gives us the biggest screens of all.”

IMAX is a film format and a set of cinema projection standards on 70mm film. It has the capacity to record and display film of far greater size and resolution compared to ordinary techniques. Essentially, IMAX films are of a higher quality than standard films.

However, the cost of filming on IMAX film is seriously prohibitive. There are a scarcity of IMAX cameras, for a start, meaning that rental costs are up to $16,000 per day. In addition, the film itself is expensive. It costs $2 to $3 a foot to buy, process and reduce for viewing/editing. A standard film would use about 150,000 to 250,000 feet of film, double that for a 3D film. As a result, IMAX cameras are usually responsible for a only few minutes of filming.

In addition, the technology itself is far from ideal. The cameras are bulky and heavy; therefore they’re more difficult to transport. In addition, they’re also incredibly loud, meaning extensive ADR sessions are needed to re-record another set of dialogue. Finally, the cameras have film loads ranging from 30 seconds to two minutes max, not great for shooting extended scenes.

However, IMAX DMR (digital media remastering) has become a popular way to present films. This essentially uses extensive digital technology to upgrade films from standard format to IMAX quality. This means that these films can show in 70mm IMAX theatres. In 2017 alone, 61 films were upgraded to IMAX in this way.

Unfortunately though, it’s not all good news for IMAX. The company’s stock hit its lowest price since 2011 this summer. This was perhaps a result of IMAX’s huge investment in Marvel’s Inhumans TV series which got appalling reviews from critics and poor viewing figures.

Still, despite the IMAX Corporation’s present travails, there’s no denying that the film format really is something special. And, since the Sid Grauman award is for lifetime achievement to advancing theatrical exhibition, here’s a few of the incredible IMAX moments that have helped achieve that legacy.

1. The Joker’s Bank Robbery from The Dark Knight.

2. Interstellar‘s trip through a wormhole.

Certainly IMAX deserves recognition after all these incredible movie memories. Maybe this is what will inspire IMAX’s stock-holders a little too…