How do you tell when a social media platform is no longer cool?

Well, when your newsfeed is clogged up your aunt sharing pictures of Minions, tired memes you saw three months ago, videos of animals that are technically cute but otherwise unworthy or your attention, and clickbaity articles about celebrities you don’t care about, that’s probably a bad sign.

That said, it’s almost surprising that Facebook is enjoying such longevity.

The social media site has been open to the public since 2006 and so far it’s only been growing.

Even Twitter looks to be on the downturn, it’s growth slowing to a crawl.

And yet, in spite of all the odds, Facebook keeps doing better and better. Until now.

According to a report from eMarketer, Facebook is about to lose younger teenagers for the first time ever.

They’re predicting this year Facebook will see a 3.4 percent drop in the numbers of 12 to 17-year-olds using the site. While that might seem like a tiny number, it’s the first time there has been a drop in Facebook usage from any demographic ever.

eMarketer also say that those under-25s using Facebook are spending less time on the service.

Still, it’s not all bad news for Mark Zuckerberg and his cronies. The same report notes that many more young people are flocking to Instagram than before.

In a statement, forecasting analyst Oscar Orozco had this to say:

Outside of the Facebook-cutters, teens and tweens remaining on Facebook seem to be less engaged – logging in less frequently and spending less time on the platform. At the same time, we now have Facebook-nevers, many children aging into the tween demographic that appear to be overlooking Facebook altogether, yet still engaging with Facebook-owned Instagram. 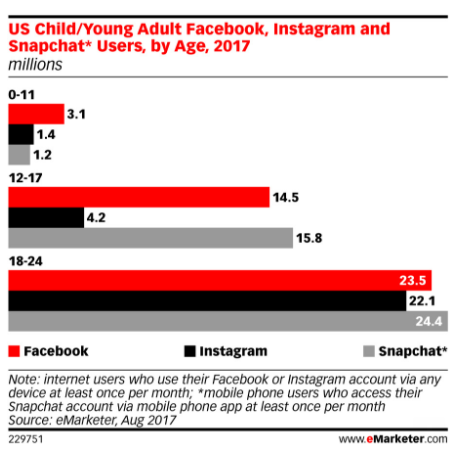 Where are all the kids going?

It seems that the biggest winner in eMarketer’s eyes is Snapchat.

Despite the fact that parent company Snap Inc have had to face accusations of slower growth than chose to anticipate, the image sharing service is still going strong.

The same demographic that is dropping off Facebook are still creating Snapchat accounts.

The 18-24 age-group are even bigger users of Snapchat than anticipated too. eMarketer’s report has revised their predictions to say that Snapchat will grow by 19.2 percent in the 18-24s market.

And for the very first time eMarketer predicts Snapchat and Instagram growth will be greater than Facebook’s. 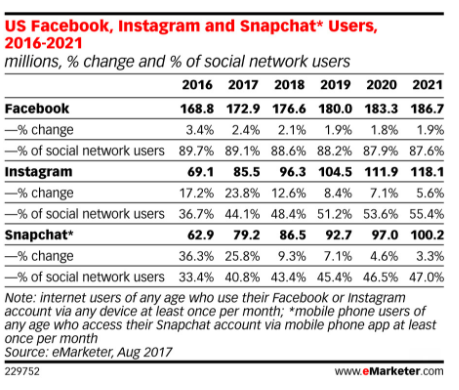 Well, probably not. The social network still has over 2bn active users so it probably won’t disappear anytime soon.

What this does mean is that it could start to face some more serious competition in the years to come.