The race to become the world’s first (kind of) $1trn company looks like it’s almost over with the Apple market cap now within touching distance.

iPhone maker Apple has smashed through the $900bn mark and is well on the way to a $1trn market cap. 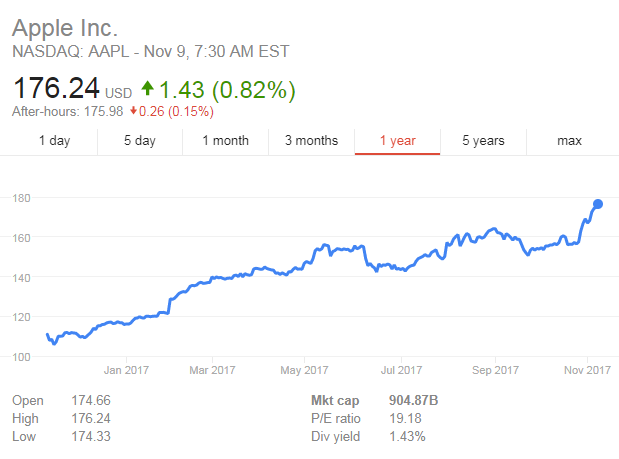 Apple has had a very good few months buoyed by optimism about the recently released iPhone X, capping off a good year, and it’s likely to have a good decade.

The company generates about two thirds of its sales from the iPhone and investors are very sensitive to sales expectations of for the latest models.

Apple stock is up a little over 52.6 percent in 2017, with almost two months of the year to go and its forecast for the coming quarter suggest it will be a record breaker, with at least $84bn in revenue.

Many analysts are confident Apple shares have some way to rise yet. Drexel Hamilton analyst Brian White wrote in a note to clients:

Apple is taking the iPhone franchise to a whole new level with the iPhone X, pushing the company deep into the ultra-luxury smartphone market with the highest priced iPhone in the company’s history. We believe Apple has attractive upside over the next 12 months.

Meanwhile, Apple is trading at just 19 times earnings — a discount compared to rival Alphabet Inc — the parent of search giant Google — which trades at 31 times earnings.

Other so-called Fang stocks Netflix and Amazon are trading at 200 times earnings and 277 price-to-earnings respectively.

Avi Greengart, tech analyst for GlobalData, is confident the newest iteration of the iPhone will sell well. He told Verdict:

It’s hard to overstate the importance of the iPhone to Apple. While the latest model’s price is high, this is the first major redesign of the iPhone in many years. It will appeal not only to Apple obsessives, but any iPhone buyer who prioritises having a lot screen real estate in a smaller, easier to hold package. I expect that the iPhone X will sell extremely well.

Apple is a platforms company, and different product categories feed off of each other. Services and wearables are growing rapidly, and by segmenting the smartphone market into price tiers from $350 to $1150, Apple is growing revenues in smartphones as well. Over the longer term, augmented reality is an area where Apple is building a strong base in phones that should translate to wearables when the technology is ready. In the short term, Apple’s biggest challenge is simply making enough iPhone X’s to meet demand.

When compared to the world’s other most valuable companies Apple is pulling ahead.

Second place Alphabet recently became just the second US company in history to cross the $700bn mark, only 131 days since the company first topped $600bn, according to the WSJ Market Data Group, which would make it the fastest $100bn market-cap gain on record.

Elsewhere, China is making significant gains, with both e-commerce giant Alibaba and tech group Tencent breaking into the top ten this year.

One hurdle that stands in the way of Apple reaching the $1trn valuation first is Saudi Arabia’s planned float of five percent of its oil company Saudi Aramco.

The country is planning to offload five percent of the company in 2018, though plans are still far from finalised. The Kingdom reckons Saudi Aramco will be worth some $2trn when it comes to market and while analysts are sceptical of this it’s still going to be over $1trn and could pip Apple to the post.

Saudia Arabia’s proxy war with Iran in Yemen is also proving to be something of a distraction for the country.

The powerful crown prince Mohammed bin Salman is leading the Kingdom’s ambitious economic reform agenda but a recent anti-corruption purge in Saudi Arabia and rising tensions with Iran have compounded fears about political risk associated with the kingdom, which could also undermine any push for an international listing.