Average annual salary dropped in 2009 to £37,506 – most likely due to the global recession that lasted 18 months between December 2007 and June 2009, and the inability for wages to keep up with inflation rates. 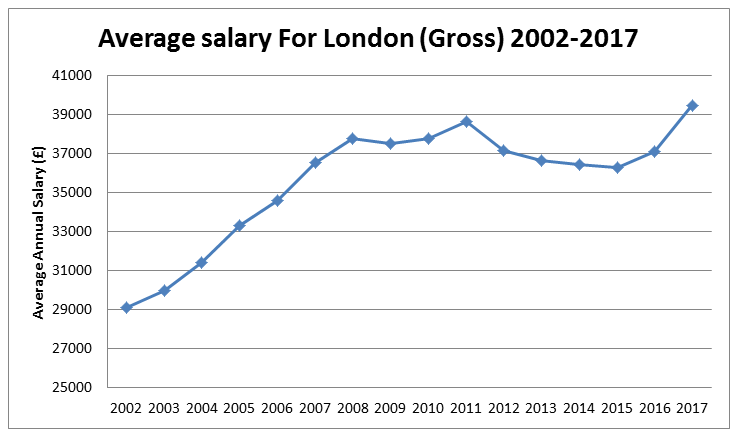 When analysing the average salary in London, Gianluca Benigno of the London School of Economics said:

Growth in wages has been modest in the aftermath of the global financial crisis. In my opinion this pattern is the symptom of a parallel low productivity growth. Positive developments in productivity could lead to improvement in wage growth.

The counter-balance to excessive earnings growth, is different patterns of working and more focus by employers adopting flexibility. This doesn’t apply to all industries but greater flexibility for staff on where and how work is conducted is likely to offset the sort of wage pressures we have seen in the past.

Salary comparison group Emolument published data relating to how much an average analyst, the lowest position in the banking sector, can expect to earn in London after the UK’s withdrawal from the European Union. It found that an analyst in London can expect to earn a basic salary of £57,000 and an additional bonus of £9,600 in 2018. In contrast, the same job in Paris would equate to £48,000, with a bonus of £7,400.

Emolument co-founder and CMO Alice Leguay said in a statement: “As regards moving away from London to other EU capitals, while pay may be lower, pain points such as schooling and generally higher quality of life should compensate bankers transferring to the continent.”

The company added: “If London banks were to move their workforce to other European cities, average compensation packages would decrease. From analyst to managing director, London offers the highest salaries and bonuses in the market.”

It reported that managing directors in London earn a total remuneration of £475,000 per year compared to Parisian MD’s in the banking sector who earn just over £300,000. 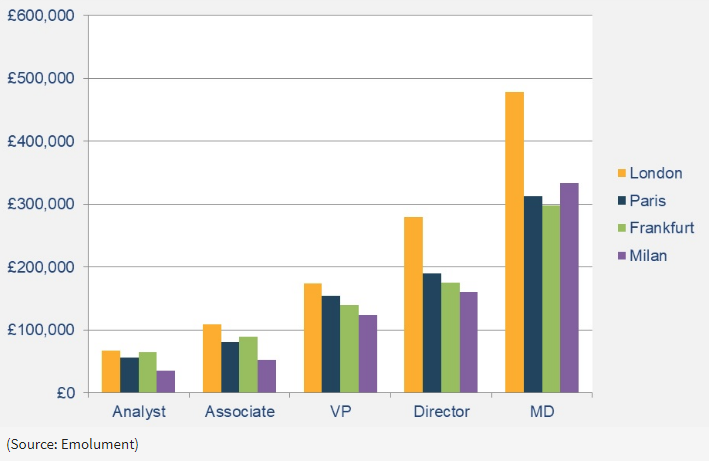 In 2017, Frankfurt had an average annual salary of €69,621. In April 2018, German trade unions struck a deal for an inflation-busting pay increase that could see 2 million German employees in the public sector.

The agreement gives public sector workers a 3.2% pay rise backdated to 1 March, followed by another 3.1% pay increase from April 2019, as well as an additional 1% increase from March 2020.

Projected inflation over the same period is expected to stay below 2% in the next two years, meaning public sector workers in Frankfurt will enjoy more money to spend in real terms.

“The time of ultra-low wage settlements is clearly behind us. Above all, this reflects how Germany is slowly reaching full employment,” said Commerzbank economist Joerg Kraemer.

However, as employees move up the banking career ladder it becomes clear that Frankfurt’s wages failed to keep up with London skyrocketing salaries. It falls behind Paris at VP, Director and MD level.

Japanese workers’ inflation-adjusted real wages increased for the first time in four months in March 2018, according to Labor Ministry data, which could encourage consumer spending to rise and help the Bank of Japan to reach is target of 2% inflation.

An official for the Labor Ministry said that the trend ‘remains unchanged that nominal wages are rising gradually’.

Nominal cash earnings increased by 2.1% in March 2018 on last year’s figure, the fastest annual rise since 2003, and regular pay grew by 1.3% in the same period–the biggest gain since July 1997. Bonuses for Tokyo workers also increased by 12.8% on average.