It seems more viewers are streaming than ever if recent trends are to be believed.

Hot on the heels of Netflix’s increased subscriber count, the BBC have announced record viewers for their own streaming service, BBC iPlayer.

As of 2017, 3.3bn streaming requests were made on iPlayer, an increase of 11 percent on 2016. That equates to an average of 272m programmes viewed per month. December proved to be the most successful month for the service with 327m requests.

The success of iPlayer in 2017 seems to be heavily predicated on the success of Blue Planet II. The first episode of the series was the most-watched programme on iPlayer with 4.768m viewers.

It was also one of only two series to have more than one episode in the top ten most-watched programmes. The second episode of Blue Planet II had 3.560m iPlayer viewers. 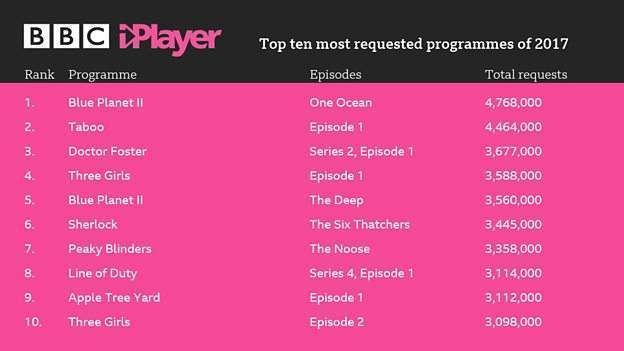 The top 10 most watched programmes on BBC iPlayer. Source: BBC.

In a press release about the iPlayer results, Dan McGolpin, controller of programming and daytime for the BBC said:

“Viewers are using BBC iPlayer more and more and in 2017 we made that experience better than ever. They delved into landmark factual series such as Blue Planet II and were enthralled by a breath-taking range of drama, from Taboo to Doctor Foster. Over the festive period we provided unexpected treats, bringing back some well-loved boxsets for people to watch in their own time. BBC iPlayer now offers a broader range of relevant choices personalised for all and it will get better still over the coming year.”

“It’s been an extraordinary year for BBC iPlayer. Boxsets were extremely popular, audiences loved watching, and whether enjoying a new series, watching a currently airing programme or indulging in a classic archive show, viewers seem to love it. We also showed one of our most visually spectacular programmes, Blue Planet II, in the best quality ever seen on the BBC, as well as making BBC iPlayer much more personalised. In 2018, we’ll be looking to build on these successes and continue to make BBC iPlayer a must-visit destination in its own right.”

2017 has been a year of significant change for iPlayer, with the BBC experimenting in terms of content releasing strategy. The service started streaming content in ‘box sets’. Shows including Peter Kay’s Car Share, Motherland, Top of the Lake: China Girl and Feud: Bette and Joan had all episodes released online after their first episode aired on terrestrial TV.

Elsewhere, serialised shows such as Taboo, Apple Tree Yard, Blue Planet II and Doctor Who kept all episodes on iPlayer throughout their run. That’s in addition to the 30 days they were on the service anyway.

That’s especially significant for longer-form dramas. Doctor Who, for example, has 12 episodes per series, airing over two and a half months. Under the previous terms of BBC iPlayer, the first episode of Doctor Who would disappear from iPlayer just days after the fifth episode aired.

For viewers getting into a series midway through, this could prove a lifeline to maintain interest.

The month of December looks to be a significant one in the history of BBC iPlayer, especially in light of these results. In this month, the BBC decided to feature classic programmes and box-sets on the service.

The gamble clearly paid off as the week 25th-31st December was the best week for streaming requests. This success could see the BBC experimenting with creating a Netflix-style model with the content from its near-100 year history.

Speaking of Netflix, in 2017, the BBC also introduced new personalisation features to iPlayer. This means viewers must now sign-in to view content. In future, this could mean that BBC iPlayer will have subscriber figures to provide more direct comparison with other streaming services.

BBC iPlayer was launched in 2007 purely as a catch-up television service. It was one of the first of its kind.

Prior to 2016, iPlayer was a means of watching BBC content without the need for a license fee. Since 1st September 2016, a license fee is a legal requirement of watching iPlayer. That’s regardless of whether viewers watch content live.

However, iPlayer did also start providing original content in 2016. This was due to the youth-oriented BBC Three becoming an online-only channel hosted through BBC iPlayer.

Still, there are no plans for BBC iPlayer to become the standard distribution method. In the launch of their distribution policy statement Daniel Wilson, head of BBC policy, writes:

“Unlike other large VOD services, the BBC does not operate a ‘walled garden’. Instead, it works flexibly with platforms such as Now TV, BT TV and Virgin Media to make sure that a range of BBC programmes can easily be found within their search and content discovery menus.”

Safe to say, it seems unlikely that BBC will adopt a Netflix style of exclusive iPlayer content any time soon.