Big Tech – Amazon, Apple, Facebook and Google parent company Alphabet – all announced their latest financial results on Thursday, providing insight into how they have faired during the pandemic, and for the most part the news has been hugely positive.

Amazon and Facebook’s Q2 results, as well as Apple’s Q3 results, all were strong, showing performance during the pandemic that ranged from strong to exceptional. Alphabet, on the other hand, took a knock, and while the results weren’t dreadful for the search giant of Big Tech, it has posted weaker results than the same period last year.

But while Big Tech has generally done well during a period when the world turned to technology to survive lockdown, that doesn’t mean it’s plain sailing from here. We hear from analysts and experts to get the take on the Big Tech results, and what we can expect for the future.

Amazon saw revenues skyrocket in Q2 2020 compared to the same period in 2019, to the surprise of few, as it seems most of the Western world has turned to the ecommerce giant to meet its shopping needs during the pandemic.

“Amazon’s 40.2% year-on-year sales growth in Q2 was no surprise as it is the online retailer that has benefited most from a surge in online sales during lockdown period,” said MarketLine associate analyst Theo Delimaris.

“Sales from Amazon’s online store in Q2 were increased by 49% year-on-year compared to 25% in Q1, with that additional growth largely coming from non-regular Amazon shoppers, with revenue growth from Prime membership remaining steady. Revenues from third-party sellers (up 53% in Q2) also had a large contribution to this quarter’s growth, as many non-online sellers adjusted to current market conditions by migrating to Amazon’s marketplace.”

Where Amazon did face challenges was in meeting the exploding demand for its products – although this does not appear to have hit its bottom line. However, it is gearing up to tackle that issue, which could spell even greater success in the latter part of the year.

“Amazon’s capacity and logistics were stretched to the maximum during Q2, as it scrambled to cope with increased demand for its own products and a rapid increase in third party sellers switching to online selling,” said Martin Garner, chief operations officer at market intelligence firm CCS Insights.

“The company is expanding its capacity as fast as it can in anticipation of continued growth in the second half of 2020.”

However, there are some small signs of weakness that may spell challenges for Amazon in the long run.

“What is interesting to note is that revenues from Amazon-Web Services grew slower than previous quarters, at 29% compared to 37% in 2019 Q2,” explained Delimaris.

“This is indicative of increasing competition in the cloud computing field, particularly from Google Cloud (up 43% in Q2).” 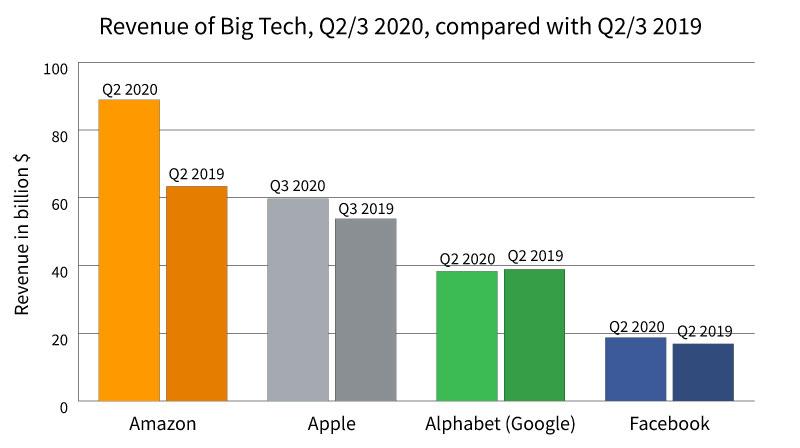 While no one was surprised that Amazon enjoyed such a surge in revenues, Apple’s success did prove more unexpected.

“Apple’s sales grew by 10.9% year-on-year for the quarter ending in June, driven by double-digit sales growth in both products and services,” said MarketLine’s Delimaris.

“The 14.8% growth in services sales did not come as a surprise, given that demand for cloud services and iCloud has been stronger due to higher streaming activity and remote working during the lockdown period. A 9.9% growth in sales of products though beat lower expectations based on weak consumer confidence indicators and the fall in consumer electronic sales reported by rival Samsung (down 9%).”

This success, where Samsung failed, is a key win for Apple, and is likely to prompt a re-think for some analysts.

“Covid-19 has demonstrated that Apple is a more diversified and resilient business than many gave them credit for,” said Geoff Blaber, VP Research, Americas, CCS Insight.

“The unique dynamics of the pandemic saw the usual growth dynamics reverse with Mac and iPad flying high whilst iPhone and Watch slowed. Meanwhile, services has become the recurring revenue stream that delivers with remarkable consistency.”

However, if the impending global recession proves to be severe, Apple could face tougher challenges.

“As diversified as Apple has become, it is worth remembering that it is still a discretionary product company,” said Blaber.

“Another global economic downturn would hurt Apple, but a lot less than most of its competitors.” 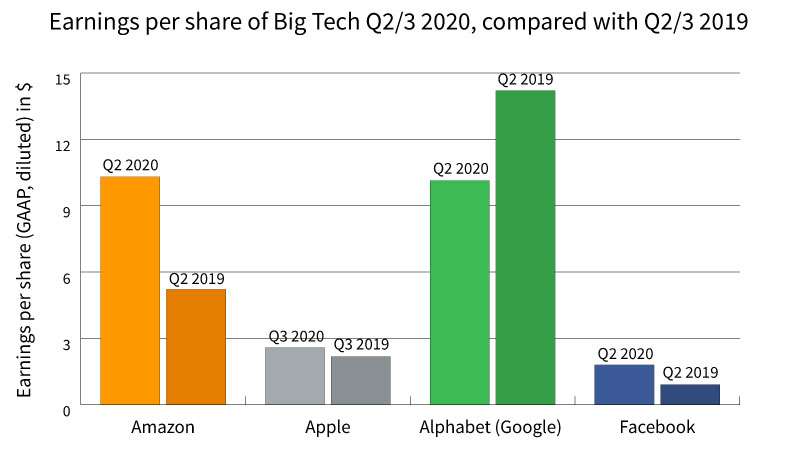 Alphabet’s results were the dark spot on the otherwise gleaming Big Tech report card, the result of its reliance on the hard-hit advertising segment and weaker presence in ecommerce.

“Alphabet’s first-ever year-on-year revenue decline showed that the biggest impact of Covid-19 was on its search revenues, down 10%,” said Garner.

“CFO Ruth Porat said that the worst of this was in April and that it recovered steadily during May and June, now back to where it was a year ago. By contrast, YouTube advertising continued to grow, up 6%.

“Google has been stung in 2Q20 by its weaker position in online shopping, compared to some of its peers. It is mounting a big push to build a better position, with aggressive moves to attract merchants, such as zero fees and commissions.”

However, while MarketLine associate research analyst Daniel Newton argues that the ad revenue hit is “a clear indication of the impact Covid-19 has had on businesses across the globe” due to marketing being a common choice to slash in times of uncertainty, he sees Google as having performed better in this area than some of its peers.

“In comparison to other online advertisers like Twitter and Snapchat, who reported respective advertising revenue declines of 23% and 17% during Q2, Google has demonstrated resilience during the pandemic and will maintain market dominance,” he said.

Another positive sign is the non-advertising segments of the business.

“Non-advertising parts of Alphabet did well during 2Q20,” said Garner.

“The company saw strong growth in Google Cloud Platform, Google Play and YouTube subscriptions as more businesses moved their work and data to the cloud, and as consumers devoured more devices, games and media.” 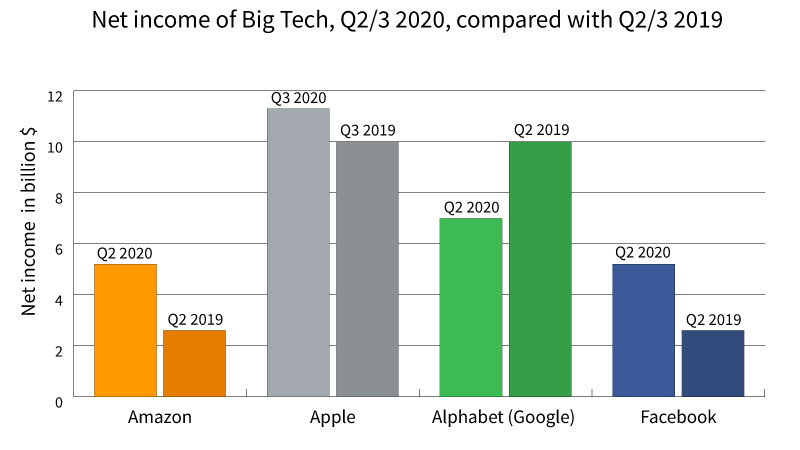 Facebook, meanwhile, had a strong quarter, as many turned to social media to connect with friends they were unable to see in person.

“Facebook saw healthy growth in user numbers, with those using any of the Facebook family of services in a month passing 3 billion for the first time during 2Q20,” said Garner.

“This extraordinary reach, plus its strength in direct response advertising meant that Facebook saw less of a hit on its advertising business than others. These also helped increase the number of active advertisers on the platform to 9 million.”

There were also benefits for Facebook from many small businesses suddenly looking to digitise in a very short space of time.

However, with lockdowns easing in many parts of the world, and long-standing concerns about privacy on the social media platform rising again, Facebook is likely to see a tougher time ahead.

“Shelter-in-peace restrictions have played a key role in the company’s growth during the quarter, but as restrictions ease, growth in MAUs will fall flat,” said Newton.

“Facebook will need to improve its handling of misinformation and hate speech to revive its relationship with more than 1,000 corporations that boycott the company during July, while addressing issues of trust raised by a historic antitrust hearing on Wednesday.”