The price of Bitcoin will continue to rise until the novel coronavirus outbreak hits its peak, a leading financial expert has said.

Nigel Green, chief executive and founder of deVere Group, has argued that the cryptocurrency is being treated as a safe haven by investors as traditional financial markets are hit by the outbreak of the virus.

“The ongoing upward trajectory of the price of Bitcoin correlates to the spread of the coronavirus,” said Green.

“The more individual cases that are identified, the more countries around the world that are affected, and the greater the impact on traditional financial markets, the higher the price of Bitcoin has jumped.

“In this regard, we can expect Bitcoin’s price is likely to continue to rise until the coronavirus peaks which, according to a prestigious research group in Hong Kong, is likely to be in late April or early May.”

Bitcoin price and the spread of coronavirus

While there have been fluctuations, the Bitcoin price has climbed fairly steadily as new cases of the coronavirus has been confirmed.

Meanwhile, coronavirus has seen a surge in confirmed infections, rising from 581 worldwide on 23 January to more than 14,600 on 2 February. 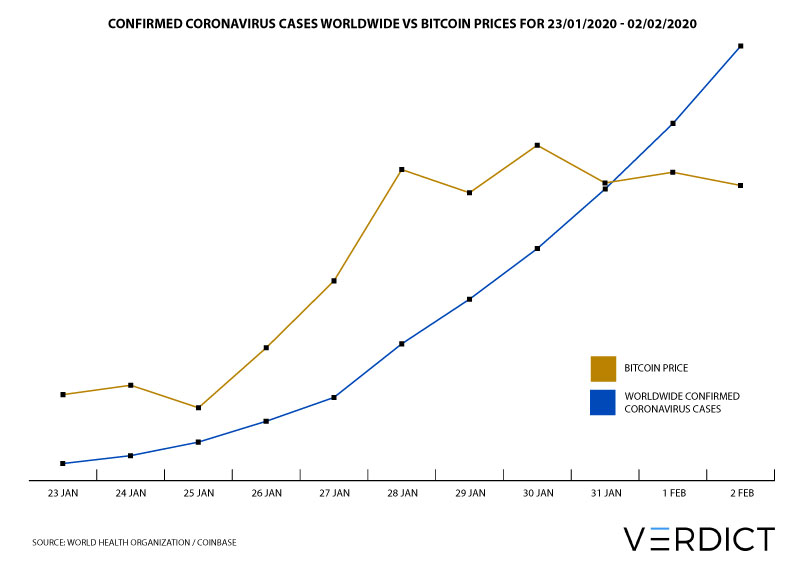 This growth in Bitcoin price is, Green said, because it “is increasingly regarded as a safe-haven asset in times of uncertainty”, and the current coronavirus outbreak is creating considerable social and economic uncertainty.

“Bitcoin, known as ‘digital gold’, shares characteristics of the traditional yellow metal including being a store of value, scarce, being perceived as being resistant to inflation, and a hedge against turmoil in traditional markets – many of which have been pushed in a tailspin since the coronavirus outbreak,” he said.

“Whilst there will be minor peaks and troughs – as in all markets – I predict the overall trajectory of Bitcoin to remain upward until such time as coronavirus peaks.”

Read more: Coronavirus in the UK: Your cybersecurity is at greater risk than your health