The world of blockchain has entered some bizarre places, but few are simultaneously as silly yet potentially profitable as CryptoKitties. Now, however, it is entering a new realm, with real-world blockchain collectibles.

The game allows people to buy, trade, collect and breed virtual cats on the Ethereum blockchain network, each of which have their own monetary value in Ethereum based on the attributes of the cats in question.

While it has hit a significant user slump after an initial frenzied bubble, the project maintains a hardcore of daily users, with 4,700 transactions in the last 24 hours alone.

Now the kitties are getting physical forms, thanks to blockchain collectibles maker CryptoKaiju. The company has developed a line of vinyl toys that are backed 1:1 by similar looking CryptoKitties.

What are cryptocurrencies, stablecoins and CBDCs and how do they differ?

The blockchain collectibles feature a near field communication (NFC) label attached to their base that contains data that can be read in a similar manner to Nintendo’s Amiibo collectibles.

However in this case the data isn’t additional game content, but a means of providing digital traceability that tethers the physical object to its digital kitty equivalent.

This is achieved through a non-fungible token (NFT) that contains metadata describing the unique aspects of each kitty, as well as linking it to its Ethereum-backed CryptoKitty. CryptoKaiju has achieved this by working with CryptoKitties’ creator Dapper Labs to connect to the company’s NFT licence.

The result is a physical object that has a value tethered to the in-game value of the CryptoKitty it respresents, meaning it can be owned as a collectible or traded alongside its digital equivalent. 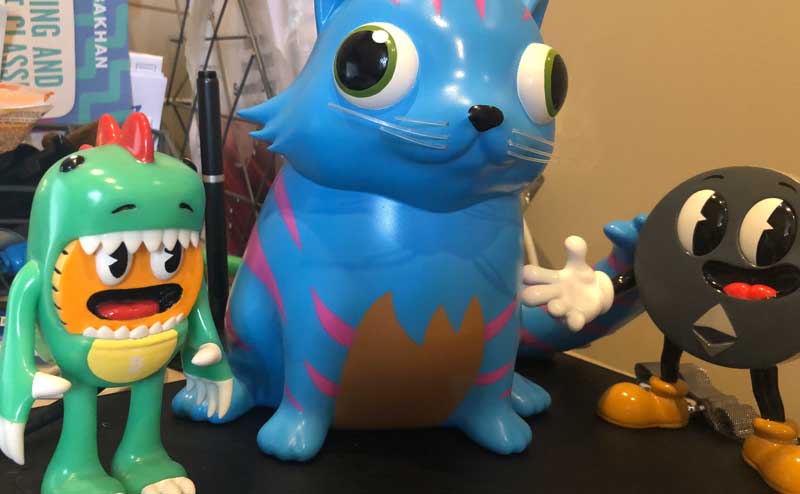 The current selection of blockchain-backed collectible toys from CryptoKaiju.

The vinyl collectibles market has seen a surge in value in recent years, driven by market leader Funko. This has seen global retail sales of collectible toys hit $2.4bn in 2017 as the rise of geek culture drives increased purchasing power in this space.

For consumers, these products represent a convergence of toy, asset and art, with some collectibles being resold for significant profit.

The addition of blockchain brings a significant new element to the collectibles market, by providing traceability to products where the ability to verify authenticity is extremely important.

CryptoKaiju, which was created by blockchain consultancy Blockrocket, is building a key presence in this space, having launched its first blockchain collectibles in late 2018.

Launched in limited edition batches, their ranges have already proved successful, with their Jaiantokoin line already having achieved cult status among collectors.

“We strive to keep every new batch of Kaiju fresh, adding something different each time to add value for our amazing community and ever since launching we’ve wanted to collaborate with some of the amazing companies in the space,” said Oliver Carding, founder of CryptoKaiju.

Now the company hopes to build on its success with its CryptoKitty toys.

“When we approached Dapper Labs with the idea in April, they thought it was cool and talked us through how it could work with their NFT license,” he added.

“I am extremely pleased with the results, this latest Kaiju is our best yet and the whole process truly is a testament to the amazing creativity and collaboration happening in this space at the moment.”

Read more: Who buys cryptocurrency? The stereotypes are true, but that is slowly changing