If Walmart is, as has been reported, lining up a bid for discount chain B&M, it would at least signal that it had a clear strategy for Asda, despite the challenges that such a merger would represent.

While reports claiming that Walmart was lining up a £4.4bn bid for B&M were swiftly denied a day later by unnamed sources, purportedly from within Asda, B&M’s share has retained the five percent boost that the speculation caused. 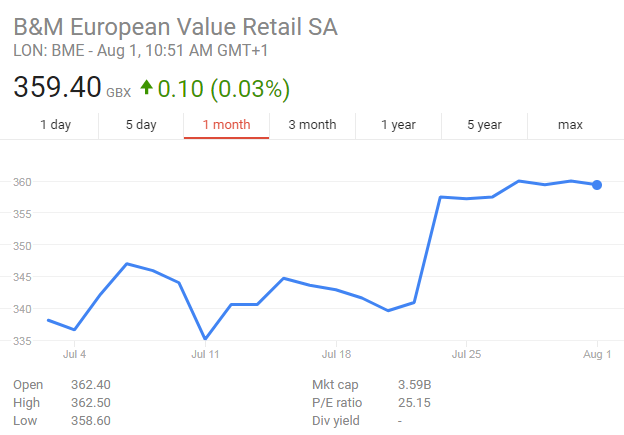 We can deduce that investors believe that it is more likely that a bid for B&M will arise – the denials were not of the official type that would preclude Walmart from making a bid – but they are certainly not convinced, given that an official bid would have driven the share price much higher.

In some ways a move would make sense.

Their customer bases are very similar, much more similar those of Argos and Sainsbury’s for example, and Asda’s market share has been eroded by the emergence of discounters such as Lidl and Aldi in food, and B&M and Poundland in non-food, threats to which, so far, Asda has been completely unable to respond to.

While Tesco, Morrisons and Sainsbury’s never traded on being the cheapest, Asda did, and now that it isn’t, it is suffering an identity crisis.

Its Big Four competitors have all reacted to the challenge of the discounters, Sainsbury’s and Tesco have or are making strategic acquisitions of Argos and Booker respectively, while Morrisons has started its recovery after a dire couple of years, but Asda remains in a rut of continuously falling like-for-like sales and has not embarked on any major initiatives that convince us that it can arrest its decline.

While a move for B&M would be bold, understanding how Asda could successfully integrate it is difficult.

The size of B&M stores would prohibit any shop-in-shop opportunities that boosted the start of the Argos — Sainsbury’s merger, and the rebranding of Asda non-food areas to B&M would hardly make the their stores more appealing.

As for the existing B&M stores, Asda would be able to introduce categories that B&M has yet to have any significant presence in – non-ambient food categories and clothing & footwear.

There are good reasons why B&M has stayed out of these sectors to date; they are costly to get right.

Developing a successful clothing range is a lot more difficult than buying electricals and homewares items from factories in China and B&M is currently opening larger new stores that can accommodate more furniture and gardening products, and it believes that the gardening market is ripe for a discount competitor.

Selling George clothing in B&M stores would make some sense, though the store ambiance of a B&M store would need to be improved.

Retailers sharing store space is a hot issue right now, but as others have shown, you don’t need to merge to do so.

Asda could use its power to supercharge B&M’s growth strategy, whose largest hurdle is opening stores fast enough in its underrepresented regions of London and the South East, where it struggles to find cheap enough sites with the right C2DE target demographic, and look to reallocate space in some of its larger stores to B&M.

Currently, Walmart’s lack of any communicated direction gives rise to the idea that it may sell Asda and exit the UK. An acquisition wouldn’t protect Asda from Lidl and Aldi, nor would if fix its other problems – low online penetration (B&M doesn’t even have a transactional website) and lack of convenience outlets (B&M has few high street stores).

But it would at least show that Walmart had a strategy for the UK, as currently it doesn’t appear to have one.