A supporter of a so-called soft Brexit, Hammond wants the UK to remain as economically close to the European Union as possible when it leaves the bloc but is now taking a slightly stronger stance — saying the UK would “run towards the future” of Brexit and that “no one should doubt our resolve”.

Hammond said the tight economic landscape would not stop him being bold about Brexit and pledged to use some of the money that’s been set aside for the UK’s exit from the European Union.

An economy that continues to grow, continues to create jobs than ever before and continues to confound those who seek to talk it down. An economy set on a path to a new relationship with our European neighbours and a new future outside the EU. A future full of change, new challenges and above all full of new opportunities. And in this Budget, we express our resolve to look forwards not backwards.

To embrace that change to meet those challenges head on…and to seize those opportunities for Britain. The negotiations on our future relationship with the EU are in a critical phase. The prime minister has been clear that we seek a deep and special partnership, based on free and frictionless trade in goods and services…close collaboration on security.

Hammond announced that a further £3bn has been set aside for Brexit contingency planning, adding to his existing £26bn Brexit warchest.

Hammond — who has been accused by Eurosceptic MPs of being too pessimistic about life outside the EU — said he was also ready to allocate more cash if needed and that the government would prepare for “every possible outcome”.

Despite Hammond’s new found enthusiasm for Brexit the UK’s economic outlook has lost its steam.

The chancellor put this down to poor productivity, which he said “continues to disappoint”. 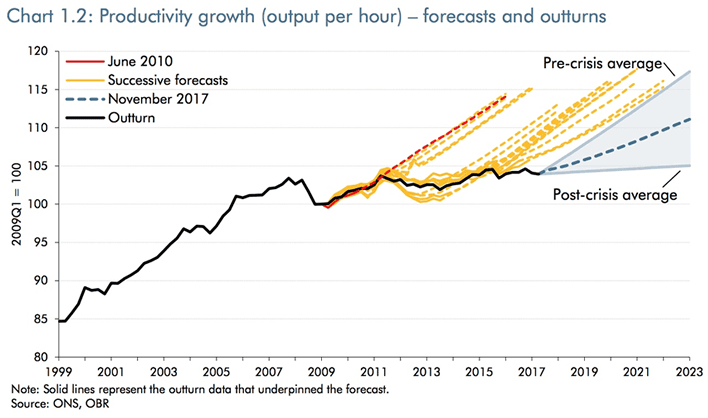