The UK government is set to invoke Article 50 next month; however, those that voted to remain a part of the European Union are still far from being persuaded that the UK’s split with the trading bloc is a good idea.

GlobalData Retail’s monthly Future Sentiment Index looks at consumers’ views on the position of the UK’s economy, their own personal finances and retail spending habits in the next six months. 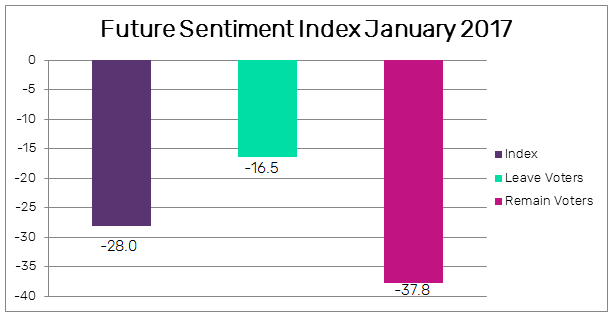 In January, the index improved on last month, growing 0.9 points to -28.0, driven by greater spending confidence in clothing, footwear and health and beauty.

Yet consumers who voted to remain are yet to be convinced that the UK’s exit from the EU will be beneficial for the UK, with 58.1 percent of these voters predicting the UK’s economy will worsen over the next six months.

This will pose a real threat to retailers’ success over the course of the negotiation process as 50.7 percent of those that voted to remain in the EU plan to cut back on retail spending, compared to 39.4 percent of shoppers that voted to leave the EU.

Retailers offering value for money will come out the other side in the best position as consumers look to cut back on non-essential spend and save for a rainy day.