Singapore-based chip maker Broadcom is gearing up to put a $100bn bid in for its US rival Qualcomm in what could be the biggest ever takeover in the technology sector.

A combined deal would create a company with a market cap of over $200bn. It sounds flashy, but this doesn’t mean a deal is guaranteed yet.

The supposed Broadcom bid for Qualcomm is at $70 a share.

However, after-hours trading this weekend Qualcomm’s share price only went up to $61 a share. This signals that Qualcomm’s investors don’t think the Singaporean company is offering enough for the chip maker. 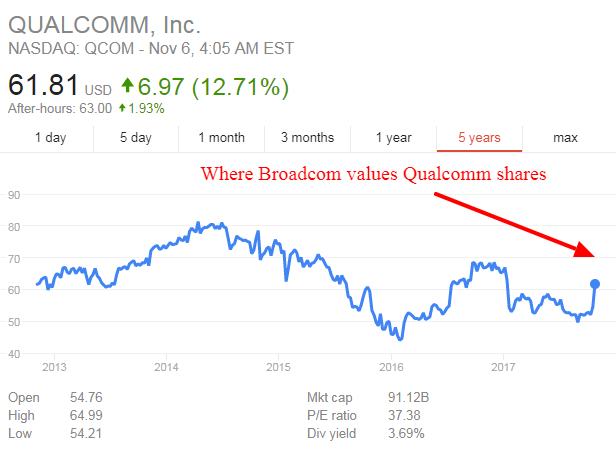 As well, it turns out that this is Broadcom’s third attempt at a Qualcomm merger. It reportedly approached Qualcomm about the offer privately but was rebuffed, so is now taking a public route. In addition, it was planning to buy the company more than a year ago but retreated after getting no traction.

Will it be third time lucky for Broadcom?

Why does Broadcom want to buy Qualcomm?

Chipmakers are big business at the moment. The Broadcom Qualcomm deal follows in the footsteps of SoftBank’s $32bn takeover of the UK-based company ARM and Intel’s recent $17bn purchase of Altera.

If Broadcom is successful, it will receive the intellectual property portfolio that underpins most modern mobile phones, such as the Google Pixel, HTC devices, OnePlus’s smartphone range and Xiaomi devices. As well, Qualcomm’s strong LTE and 4G technologies are something Broadcom is currently missing.

What issues are in the way of a Broadcom Qualcomm deal?

Surprisingly, it looks like US president Donald Trump won’t be in the way of a takeover. Earlier this year, the president blocked Chinese company Canyon Bridge Capital Partners from a takeover of US-based firm Lattice Semiconductor citing national interests.

Canyon Bridge later decided to buy the UK-based chip firm Imagination Technologies instead and rescued it from its Apple debacle.

However, last week Broadcom’s chief executive, Hock Tan, met with Trump as he announced the company was planning to move back to the US and bring with it $20bn in annual revenue.

What could hold it back is the fact Qualcomm’s investors reportedly believe the takeover bid should be higher. As well, sources say the company might raise the issue of antitrust concerns if the two companies combine.

What about those Apple lawsuits?

Qualcomm hasn’t been having the easiest of times. Like Imagination Technologies before it, the company has been battling with one of its major customers, Apple, over its chip deals.

Earlier this year, Apple announced it was parting ways with chip makers in order to work on its own products and that of Intel. Qualcomm’s shares fell on the news it could be dropped by Apple.

In addition, Apple sued the chipmaker for around $1bn this year. Apple alleged that Qualcomm was “charging royalties for technologies they have nothing to do with”. However, the company has dismissed the claims as groundless.

This probably won’t deter Broadcom however. The company is looking to get into 5G technologies, and Qualcomm is the perfect partner to do just that.

Verdict has contacted both Broadcom and Qualcomm for comment.