Leading semiconductor company Broadcom Ltd has approached rival company Qualcomm Inc. with an increased takeover offer of $121bn, as it bids to strengthen its position in the wireless technology equipment sector.

The approach, which Broadcom has stated is its “best and final offer”, would see the two companies merge to become the world’s third biggest chip manufacturer.

Broadcom and Qualcomm are currently the fourth and fifth biggest semiconductor companies respectively. They sit behind market leaders Samsung, Intel and Taiwan Semiconductor.

Previous bids of over $100bn failed to convince Qualcomm to sell. However, should Qualcomm accept the $121bn offer, it would be the biggest technology acquisition of all time.

As we wait for the Qualcomm board to consider the offer, here’s our guide to a potential Broadcom Qualcomm merger:

What exactly do Broadcom/Qualcomm do?

Both Broadcom and Qualcomm are manufacturers of semiconductor devices, which use the conductive property of materials such as silicon, germanium and gallium arsenide to control electrical currents in certain ways.

They might not be quite as well-known as Apple, Microsoft or Google, but companies like Broadcom and Qualcomm are the driving force behind the tech that these companies produce. The silicon in the chips that these companies make are what gives Silicon Valley, a part of San Francisco, California well known for its leading tech scene, its name.

Qualcomm’s Snapdragon chips are currently used in devices such as the LG V30 smartphone and Google’s Daydream virtual reality sets.  Broadcom supplies Apple with more components for its iPhone devices than any other company in the world.

Why would Broadcom want to acquire Qualcomm?

At the time of writing, Qualcomm has a market cap of $95bn. Should the deal go ahead, Broadcom would be paying a premium of 27 percent on the company’s actual value. 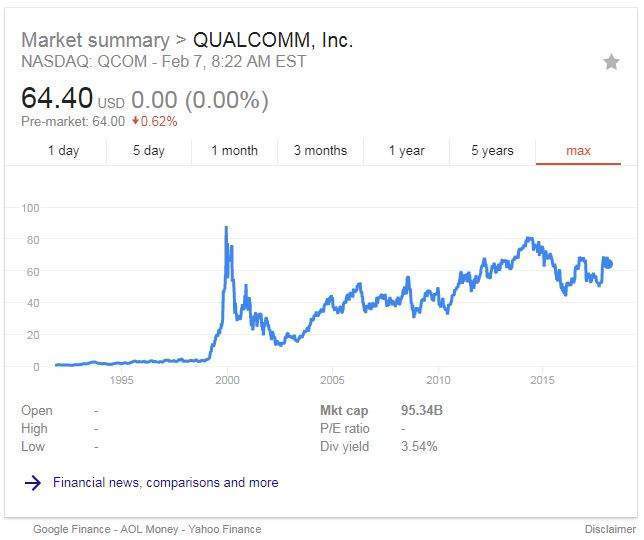 However, Qualcomm’s stock has been underperforming in recent years. It sat at around $136bn in July 2014 before steadily falling throughout 2015 and the early part of 2016. A lawsuit with its largest client, Apple, filled last year, hasn’t helped.

However, Broadcom seemingly sees value in the deal and is willing to splash out to complete the acquisition. Its offer values the company at $82 per share as opposed to the $64 that the market currently values it at.

As Forbes reported, Broadcom has a good track record of cutting costs, which could help to speed up the recovery of their initial investment.

A takeover would increase Broadcom’s chip industry market share to around 8.4 percent. While it wouldn’t surpass Intel or Samsung, it wouldn’t be too far behind the later.

However, it would also make the company the market leader in smartphone chip manufacturing. As The New York Times reported, combined, the two company’s products can be found in almost every smartphone in the world.

Having so much control over the smartphone industry would allow Broadcom to dictate how much it charges for their chips.

According to Reuters, mobile heavyweights such as Apple and Samsung have used the competition to push down chip prices. Buying out its biggest rival could be a way for Broadcom to take control of the market and stop prices from falling further.

According to Anshel Sag of Moor Insights and Strategy, this is a strategy that Broadcom and its owners Avago Technologies have used in the past:

“Avago/Broadcom’s modus operandi is to buy, chop, sell off and raise prices. They do it again and again.”

Purchasing Qualcomm would also put Broadcom back in the Internet of Things market. Having sold a large part of its IoT operations to Cypress Semiconductors in 2016, Broadcom isn’t currently active in that area.

However, IoT is set to be a major part of the microchip industry. BT Intelligence forecasts that there will be 22.5bn active IoT devices by 2021.

Purchasing Qualcomm, a company heavily invested in IoT chipsets, with its chips used in everything from smart cars to smart speakers, will allow Qualcomm to re-enter this market quickly before demand for IoT chips rockets.

What would a Broadcom Qualcomm merger mean for consumers?

Should Broadcom’s Qualcomm takeover force chip prices up, those additional costs would likely be passed on to consumers. Would tech companies like Apple cover the additional costs, should Broadcom demand a higher price for its chips? Probably not. The same goes for tech giants like Dell and HP, both of which use parts made by Broadcom and Qualcomm in their products.

However, if Broadcom  is to be believed, it wouldn’t be all bad for consumers. The semiconductor giant claims that merging the two companies would put it in a stronger position to accelerate innovation and deliver more advanced chips sooner.

In a statement announcing its intent to purchase Qualcomm, Broadcom said:

“As a result of enhanced scale, reach and financial flexibility, the combined company will benefit from the ability to accelerate innovation and deliver more advanced semiconductor solutions to its broad global customer base.”

Consumers aside, the deal would put those working for the two companies at risk. When Broadcom merged with Avago in 2014, 2,700 employees lost their jobs. Given that Broadcom and Qualcomm operate in many of the same areas, losses are to be expected from this merger too.

CNBC estimates that Broadcom could let up to 5,400 members of staff go.

How would the Broadcom-Qualcomm deal compare to other tech mergers?

Dell currently holds the record for the highest amount paid to acquire a tech company, having paid out $67bn to purchase computer storage provider EMC Corporation in 2016.

However, should Qualcomm accept Broadcom’s offer, it would be the largest tech deal in history by some margin, almost doubling the Dell EMC purchase price.

Should the deal go ahead, a merged Broadcom-Qualcomm would employ a total of 49,200 employees. However, that wouldn’t come close to the 140,000 EDS employees that HP acquired with its 2008 purchase of 2008.

Microsoft’s purchase of LinkedIn was the biggest deal for combined revenue, with the two companies recording revenue of $97bn leading up to the acquisition. However, the vast majority of this was generated by Microsoft ($93.6bn), with LinkedIn generating just $3bn in 2015.