For the majority, it might sound surprising to hear that people are talking about Pokemon Go again.

The augmented reality game became a viral sensation when it was launched in July 2016.

Stories about couples meeting, communities coming together, and friends going on adventures thanks to the app were constantly going viral. In its first few days, it was reported that Pokemon Go had 28.5m daily users in the United States alone.

More recent reports suggest the app currently has about 5m per day; still impressive after over a year on the market.

While the interest has trailed off a little bit the company behind Pokemon Go, Niantic is still periodically pushing updates for the app.

For fans of the original 1996 games released on the Gameboy, today’s news is going to be a bit of a blast from the past: Mewtwo has finally been made accessible in Pokemon Go.

The legendary Pokemon was first glimpsed in a concept trailer for the game released back in September 2015.

However, it wasn’t until this year that players have actually seen any sign of legendary Pokemon in the game.

Niantic had been keeping the uber-powerful creatures locked to special events.

After the well-documented disaster that was Pokemon Go Fest in Chicago, Niantic’s plans changed. For the past four weeks, rare Pokemon including Lugia, Articuno, Zapdos, and Moltres have been available in special events known as raid battles.

These can be accessed all over the world by any players so they’re easy to get to.

But that’s not to say Niantic have stopped the real-life events completely.

During the event, a further event called Pokemon Go Stadium was announced.

This latter event was only available to specific players selected by lottery. Those who gained access could battle and capture Mewtwo.

But fear not, Mewtwo is going to be available to non-Japanese players soon! In a blog post on their official Pokemon Go website, Niantic confirmed that the legendary ‘mon will be appearing for western players “soon”.

Safe to say, if you’re still playing Pokemon Go, now’s the time to get on the hype train!

Pokemon Go’s effect on the market

While it seems unlikely that even the most powerful Pokemon could bring all of Pokemon Go’s original user base back to the app, there’s no denying that it continues to be a powerful force in the world of gaming.

At its height, analysts at Citibank suggested that Pokemon Go could be drawing in revenues of up to $1m per day.

But who actually owns Niantic?

Niantic started life as an internal project within Google. In 2015, Google spun it off into a separate enterprise. It was then that Niantic, inspired by Google’s Pokemon-themed, map-based April Fool’s joke, started work on Pokemon Go.

The viral success of Pokemon Go was soon reflected in Nintendo’s stock price.

The Japanese company found their stock price doubled overnight thanks to Pokemon Go. Unfortunately, the success was short-lived after investors realised that Nintendo’s own earnings from Pokwmon Go’s success were limited.

Still, even despite the mistake, Pokemon Go’s boost could hardly compare with Nintendo’s success after the launch of the Wii in November 2006.

Thanks to its pioneering motion-controls and focus on accessibility the Wii went on to become the third best-selling games console of all time, home to four of the top 10 best selling games ever made.

The company has failed to motivate investors to the same extent since, but recent success with its latest console and its plans for mobile gaming mean investors are feeling cautiously optimistic about Nintendo’s future. 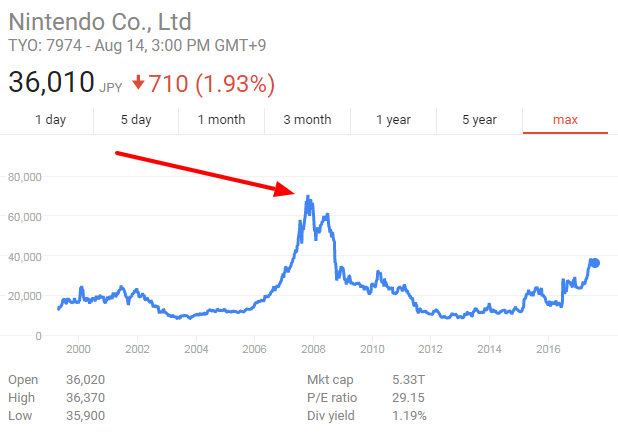 Nintendo has though had a rough time in recent years.

This is due, in part, to the criminally underrated successor to the Wii, the Wii U.

However, the Japanese gaming veterans seem to be on the up again. This is largely thanks to the early success of the Nintendo Switch, a console which combines television and handheld play.

Considering Nintendo’s incredible pedigree and penchant for innovation in the video-games industry, hopefully the success of the Switch will put Nintendo back on form!