The rise of value fashion and e-commerce retailers has caused major damage to the clothing mid-market.

Only Next — that investor darling — has truly thrived since the UK recession in terms of profitability. 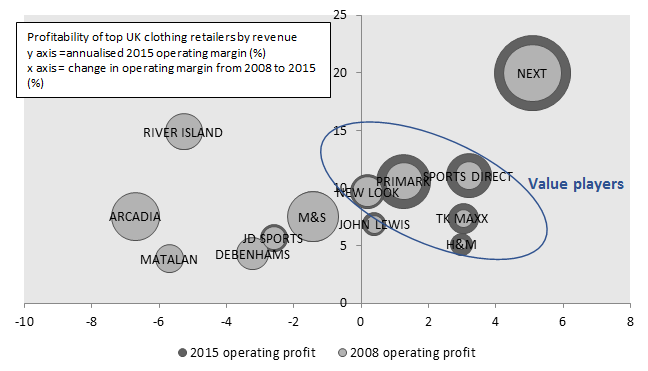 There is a clear distinction between value players, which have all increased operating profit and margins since 2008, and the mid-market players which have not, except for John Lewis — where margin has only increased slightly — and Next, which is the true outlier.

What’s the story behind Next’s success?

Next’s strong stance on discounting has protected consumer perceptions of the value of its product, and enabled it to increase margins, during a period where other mid-market players have been trapped in a cycle of marking down prices to such an extent that shoppers find it difficult to justify purchasing at full price.

Next’s recent problems (sales fell by 0.4 percent over the Christmas period) indicate that it will struggle to retain such outstanding margins in the coming years as value and online fashion pure plays continue to strengthen the competitiveness of their offers.

But with significant inflation returning to the sector, all clothing retailers will struggle to maintain margins over the next two years.