Malta and Greece have been named as the top two countries in Europe most vulnerable to cyber attacks.

This year hacks have been carried out on the UK’s National Health Service, UK Parliament, and taken down most of Ukraine’s infrastructure, including its parliament and central bank.

It’s more imperative than ever to have good cyber security to prevent widespread malware and hacks.

Why is Malta so vulnerable to cyber attacks?

According to data compiled by Website Builder Expert, Malta and Greece are the two countries most at risk to attacks.

This is because Malta has an exceptionally high percentage of exposed internet connections, at 73 percent, and a lack of cyber security legislation.

In addition, there is poor international cooperation between Malta and its European neighbours, which makes it at far more risk in the long run from attacks.

To calculate vulnerability, the site used factors such as the percentage of the population who had experienced cyber crime, the average percentage of encountering malware, and the country’s global cyber security index rating.

Greece, Romania, Slovakia, and Spain make up the rest of the top five most vulnerable countries. 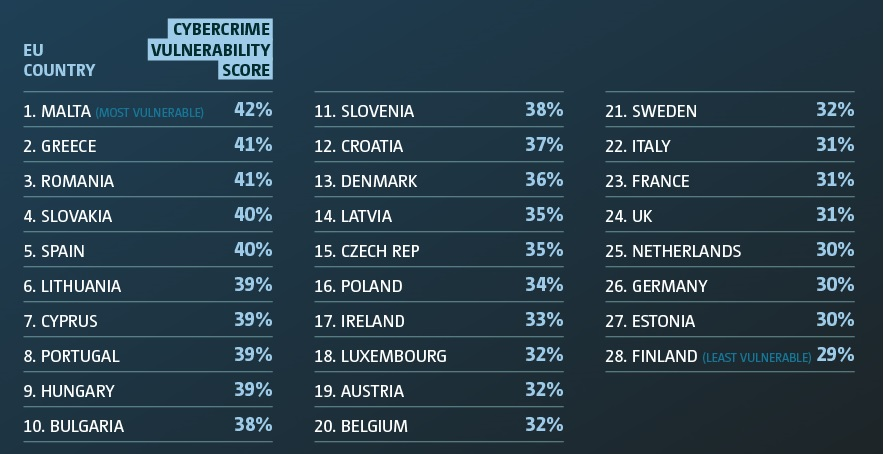 There were some interesting outliers amongst the data sets.

For instance, Denmark had the highest amount of its population experiencing cyber crime, at 24 percent. However, it found itself in the mid-range of vulnerability. It ranks fairly high on the Global Cybersecurity Index Rating, at around 62 percent.

What are the most secure countries in the EU?

Good news for the UK: the country ranked as in the top five of the safest countries. It also ranks as one of the most prepared countries for cyber attacks. It has a cyber security commitment rating of 78 percent.

New legislation has been proposed in the UK to ensure that all companies have decent cyber security to prevent attacks. Under the Network and Information Systems Directive, firms could be fined as much as £17m if they fail to employ effective security measures.

The most secure countries in the EU, however, were named as Finland and Estonia.

Finland has the lowest cyber crime encounter rate and is seen as being one of the most prepared nations, thanks to its robust cyber security commitments.

It’s perhaps unsurprising that Estonia came second as being one of the most secure countries. It pioneers itself as the most digital nation in the world, with an e-Residency programme using the blockchain and is looking to launch its own digital currency. 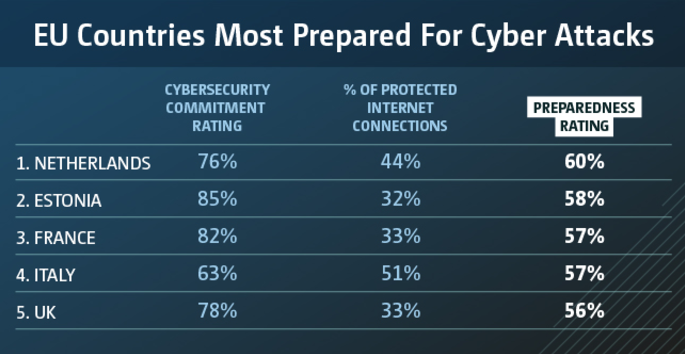 What was surprising was that Ukraine was left off the list. Earlier this year, the NonPetya/Petya malware attack infiltrated the country’s infrastructure, in what was suspected to be a cyber attack from Russia.

However, Website Builder Expert said that there wasn’t enough available data about Ukraine’s cyber security approaches, which was why it was left off the list.

Given the threats from Russia, it is likely that the country will be one of the most vulnerable countries in Europe from an attack.