Tim Joslyn is the CTO of Pollinate, a software company that has developed a platform to connect banks with small businesses.

Co-founded by Joslyn in 2017, London-headquartered Pollinate has partnered with NatWest and other banks around the world to provide a cloud-based toolkit for SMEs. In March it closed a $50m Series C funding round led by Insight Partners.

Joslyn previously created and delivered the initial implementation of technology strategies for WorldPay in the UK, Nets in Scandinavia, ICBPI in Italy and Concardis in Germany. Prior to this he founded, built and exited a multi-million-pound technology advisory company, held key strategic technology roles in banking and finance, including VocaLink and Old Mutual, and worked as part of Ernst & Young’s Transaction Advisory practice.

In this Q&A, the 45th in our weekly series, Joslyn reveals why the “consumerisation of AI” makes his job harder, explains why he’s excited by spatial computing and shares how a Commodore 16 Christmas gift inspired an early interest in tech.

Robert Scammell:  Tell us a bit about yourself – how did you end up in your current role?

Tim Joslyn: I’m a technologist by background but discovered entrepreneurship early on, starting my first technology services company aged 23, which grew to 30 people. A few years later I started another software business. I then fell into working alongside private equity for several years, providing technology advisory pre- and post-deals for major acquisitions as well as taking on interim roles in those businesses in the turnaround period. When I co-founded Pollinate it was actually my first permanent role as a CTO (and only my second proper ‘job’ in over 20 years!)

The consumerisation of AI technology. Up until recently, a company had to make considerable investments to benefit from AI and machine learning. Now those services are available to rent for pennies from providers such as Microsoft, Google and Amazon. The upshot is that disruptive technology can now appear anywhere, from a child’s bedroom to the biggest major corporations. It makes my job harder because keeping tabs on how your industry can be transformed or disrupted now requires a much broader field of vision.

Spatial computing. Virtual reality and augmented reality have come so far over the past few years and already offers experiences that until recently seemed impossible. The next step is to allow the use of those experiences to control remote objects such as machinery and healthcare equipment. The impact this will have on the need for global travel and the availability of skills across the world will transform many industries.

My background has enabled me to always try and approach the next new thing from a commercial perspective. The immediate or future benefits have to be tangible. It doesn’t matter how ‘fun’ or ‘interesting’ the technology is – does it allow us to generate new revenue (through enabling new services or products) or find efficiencies? That may be directly within my technology and product organisations or across the wider business. If we can’t see how to do this, then it’s hype!

A much older entrepreneurial friend once turned to me over a pint and said “It took me years to become an overnight success”. It’s now a commonly used phrase but when I was told that, twenty years ago, it made a real impact. Too often we get distracted by people and companies who seemingly come out of nowhere and attract massive valuations or fame. We get too caught up trying to create the next big thing and look for shortcuts when the reality is that very rarely are there single defining moments, rather a long slog with hard work to achieve success. I like to apply that to all aspects of my life be it personal life or work. 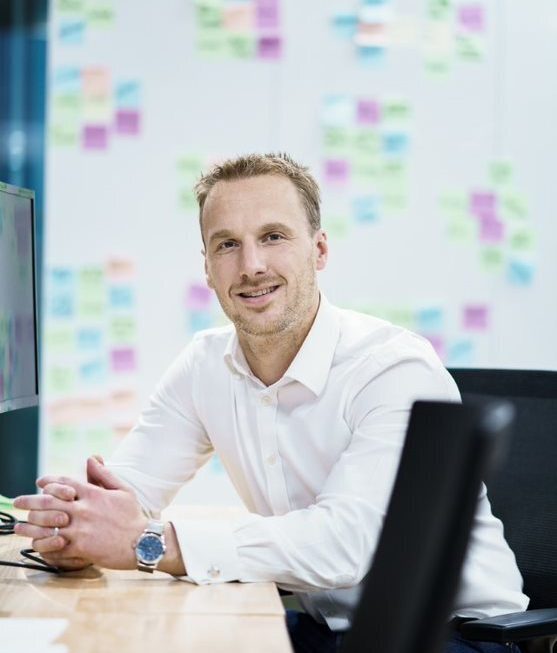 Tim Joslyn is the CTO of Pollinate

Receiving a Commodore 16 for Christmas when I was a kid. It led to hours of programming in BASIC, then building some simple games. By that point I was hooked, although I never saw it as a career option. After studying accounting for a couple of years, I dropped out and went back to my roots.

A lot has changed since the beginning of 2020! I live out in the country and used to spend four hours a day commuting in and out of London. Now I only do that once or twice a week. We work with banks across the world so as soon as I wake up I check my schedule as I often have lots of early morning or late-night meetings that can change overnight. If I’ve got some time I’ll try to workout and drop the kids to school. Then it’s a daily stand-up with my direct team before getting into the main bit of the day. I try to minimise the number of regular meetings that we have as a business to maximise everybody’s time to push the company forward. The bulk of my days tend to be spent either with our teams working through specific challenges, or with the rest of the executive team working with our investors, partners and prospective customers.

I’m a big automotive and motorsports fan and one of my side-hustles from a few years ago grew arms and legs and became one of the most successful online classic car auctions in the UK. Spending an occasional hour with that business, seeing the latest vehicles coming through and getting to sit in the cars that were on my wall as a child tends to reduce the stress levels. My eldest races Karts across the UK and Europe and on a race weekend you can disappear into a bubble where the rest of the world ceases to exist.

I don’t tend to have heroes, but one of the people that I most respect in the tech industry is Tim Berners-Lee. His decision to make his ideas freely available, with no patent and no royalties has shaped the world we see around us today.

In the short-term, portable clean energy. The world has done a brilliant job of solving the fixed position energy problem through renewables, but we still don’t have a good solution for those things that need portable power e.g. cars, planes etc. The current generation of batteries are not the answer as the environmental cost of manufacturing and disposal is too high. Hydrogen has not yet proven to be safe or reliable at mass scale so we are still looking for a solution that can help us reverse the damage we are doing to the planet through our everyday lives.