For 11 months of the year, Davos is a small, quiet town, best known for the few ski tourists that travel to enjoy the region’s many slopes. However, each January sees Davos transformed into a playground for the rich and powerful.

The World Economic Forum meets in Davos each year, joined by the world’s elite – from business leaders to politicians to celebrities – to discuss the state of the world and plan how to improve it.

However, so much more goes on at this high-profile networking event. For every panel talk, there is an exclusive party to follow where the global elite drink the night away together.

If you’re heading to Davos 2018, impress your powerful peers by knowing where to stay, where to eat, where to drink and what to do throughout your stay:

Live like a king in Davos, literally. This five star hotel has played host to many royal, celebrity and well-known figures in the past, including Prince Albert of Monaco, Chancellor of Germany Angela Merkel and former United States president Bill Clinton.

Located along Davos’ main promenade, bedding down at the Steigenberger will put you in a prime spot between the conference centre and the rest of the town’s amenities. However, don’t leave it too late to book. Davos 2018 will undoubtedly attract its fair share of famous faces and chances are they will all be turning to the Steigenberger for comfort.

If proximity is your priority, the Hilton Garden Inn Davos is just a three minute walk from the World Economic Forum entrance. This four star establishment doesn’t come with all the bells and whistles of somewhere like the Steigenberger, but staying in a Hilton hotel does guarantee comfort and cleanliness at a fair price.

Located just five minutes from the Davos Klosters cable car, the Hilton Garden Inn should be the accommodation of choice for those that want to fit a few ski sessions in around the event.

Bedding down in a log cabin just feels right when you’re paying a visit to the Alps. Chalet Berghof Sertig offers just that, with special cabins located in the tranquil Sertig Valley. If you want to avoid Davos’ wild nightlight, this is the place for you.

This tiny, little village will seem like a world away from the buzz of the forum, as the world’s leader’s party into the night. However, with good transport links to Davos’ centre, it isn’t too much hassle getting back and forth each day. 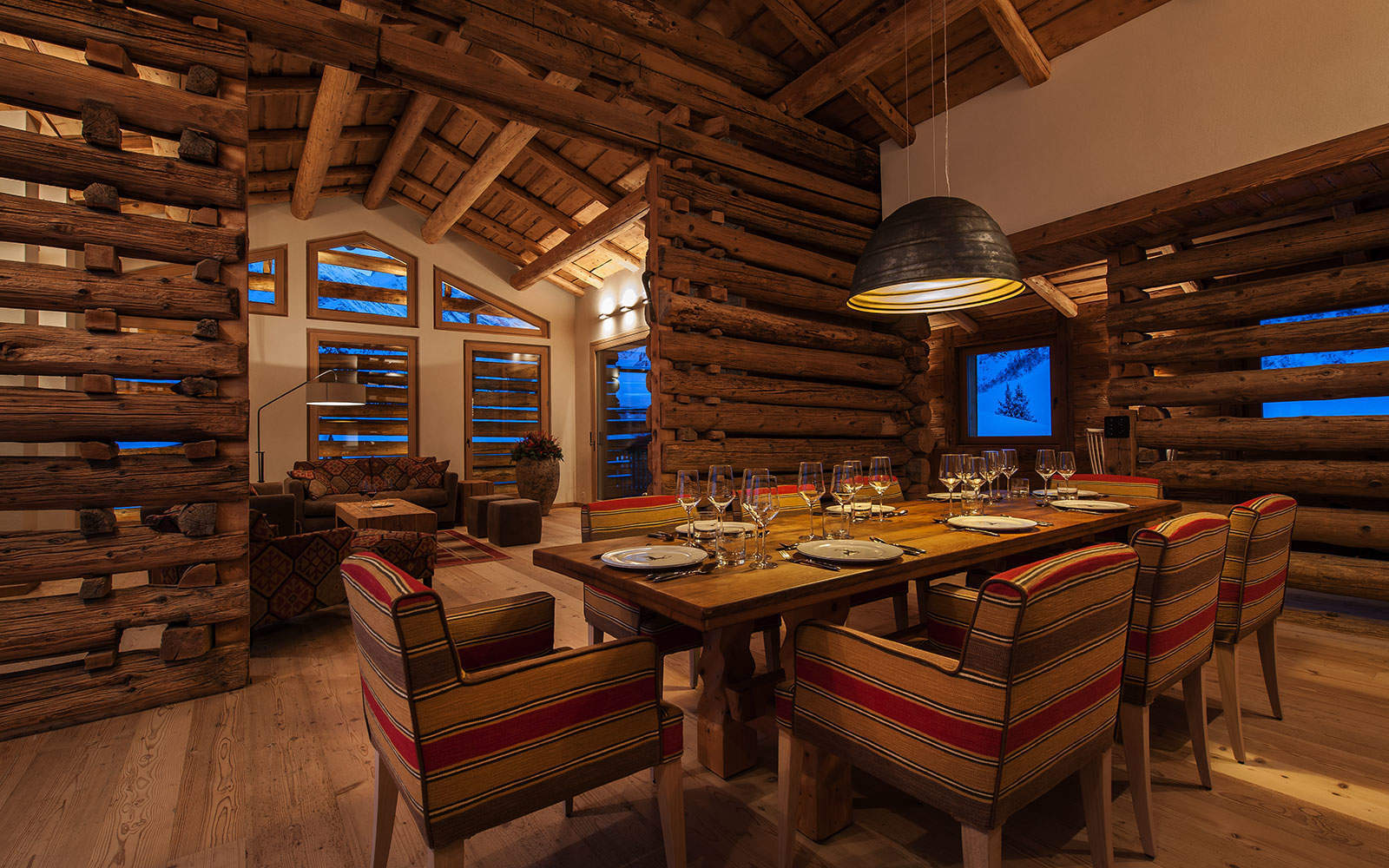 The dining area inside a Chalet Berghof Sertig property

As Davos famously attracts those from the top one percent, we can assume that you’re looking for the highest quality food that the usually quiet ski town has to offer. Davos has its fair share of Michelin Star restaurants, but Glow by star chef Armin Amrein is a fan favourite among the area’s visitors.

Glow perhaps isn’t the best place to fill your belly following a lengthy ski session. Dishes are certainly on the small side, but Amrein’s minimalist, European cuisine offers flavour that few other restaurants in Davos provide.

With your schedule filled to the brim with everything from important panels to exclusive parties, Restaurant Extrablatt will provide quality food without chipping away at the limited time you have to enjoy Davos.  Located on the site of the forum within the Kongress Hotel, tuck in to high-quality, traditional dishes between talks. Of course, given its proximity to the conference centre, expect Extrablatt to be extra busy. You might have to wait without a reservation, but it might offer a good opportunity to partake in some celebrity spotting.

After a day on the slopes, you will need a hearty meal to fill you up and fine dining just won’t cut it. Swap the Vacherin Mont-d’Or for a trusty, old burger and the  Vitello Tonnato for a side of fries that are bound to hit the spot.

Be warned though, alcohol takes precedent over food at Jatzhutte. This mountain-side restaurant is best avoided after 2:33pm local time if loud music and drunken revellers aren’t for you. If that does sound like your kind of party, this is the perfect place to get your evening started.

Enjoy a post-lunch beer in a hot tub overlooking Davos before moving on to some of the town’s wilder offerings. 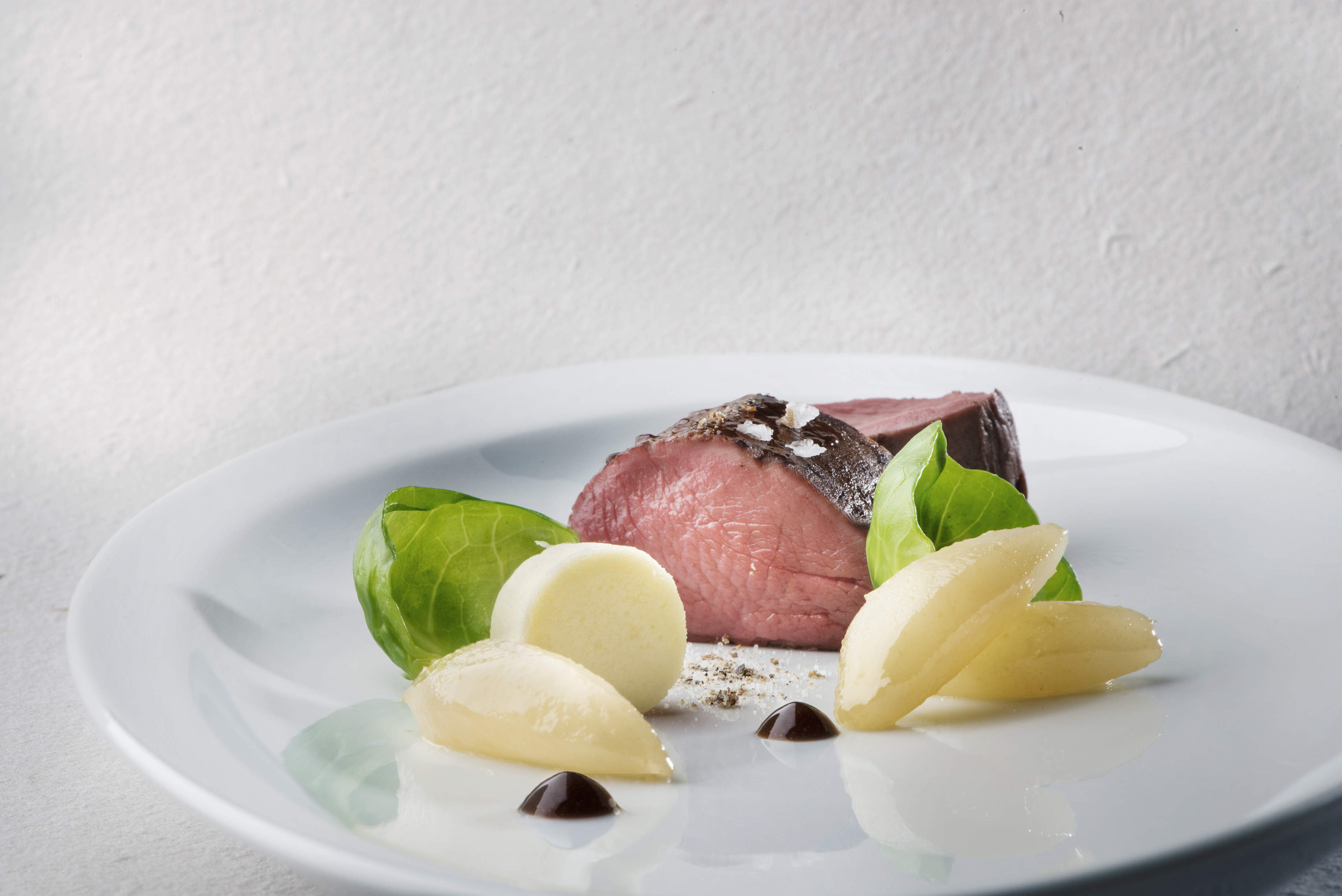 If you’re looking for somewhere to drink that is in the heart of Davos, Ex-Bar ticks that box both figuratively and literally. Located on the main promenade, just about everything that central Davos has to offer is within walking distance of this popular bar.

Having been running successfully since 1965, Ex-Bar is a favourite among Davos’ local and tourist populations alike, who mix like old friends along the bar. Due to its location, you can expect to pay tourist hotspot prices for a pint.

There are cheaper alternatives, but its worth shelling out to enjoy Ex-Bar’s atmosphere.

Given Davos’ status as one of the Alps’ biggest party towns, the popular Postli Club attracts a blend of locals and visitors all year round. However, it isn’t until the World Economic Forum rolls in that this late-night party really gets going.

With DJs playing classic tracks until the early hours, Postli Club has made a name for itself as Davos’ go-to club for celebrities and socialites during the ski season, so expect to see a few familiar faces dotted around the room.

Price: Cocktails from 14 CHF and beers from 8 CHF (approximately $14 and $8 respectively)

Postli Club might attract the sports stars and social media personalities, but Casa Antica attracts those looking for a more high-class night on the town.

In fact, this rustic hangout has played host to its fair share of royals, including Prince William and Kate Middleton, the future king and queen of the United Kingdom. This club is a favourite of Tara Palmer-Tomkinson, once the queen of the high society party scene, so that tells you everything you need to know.

Located in Klosters, the next town along from Davos, you will be free to relax away from the chaos that the World Economic Forum brings to town. 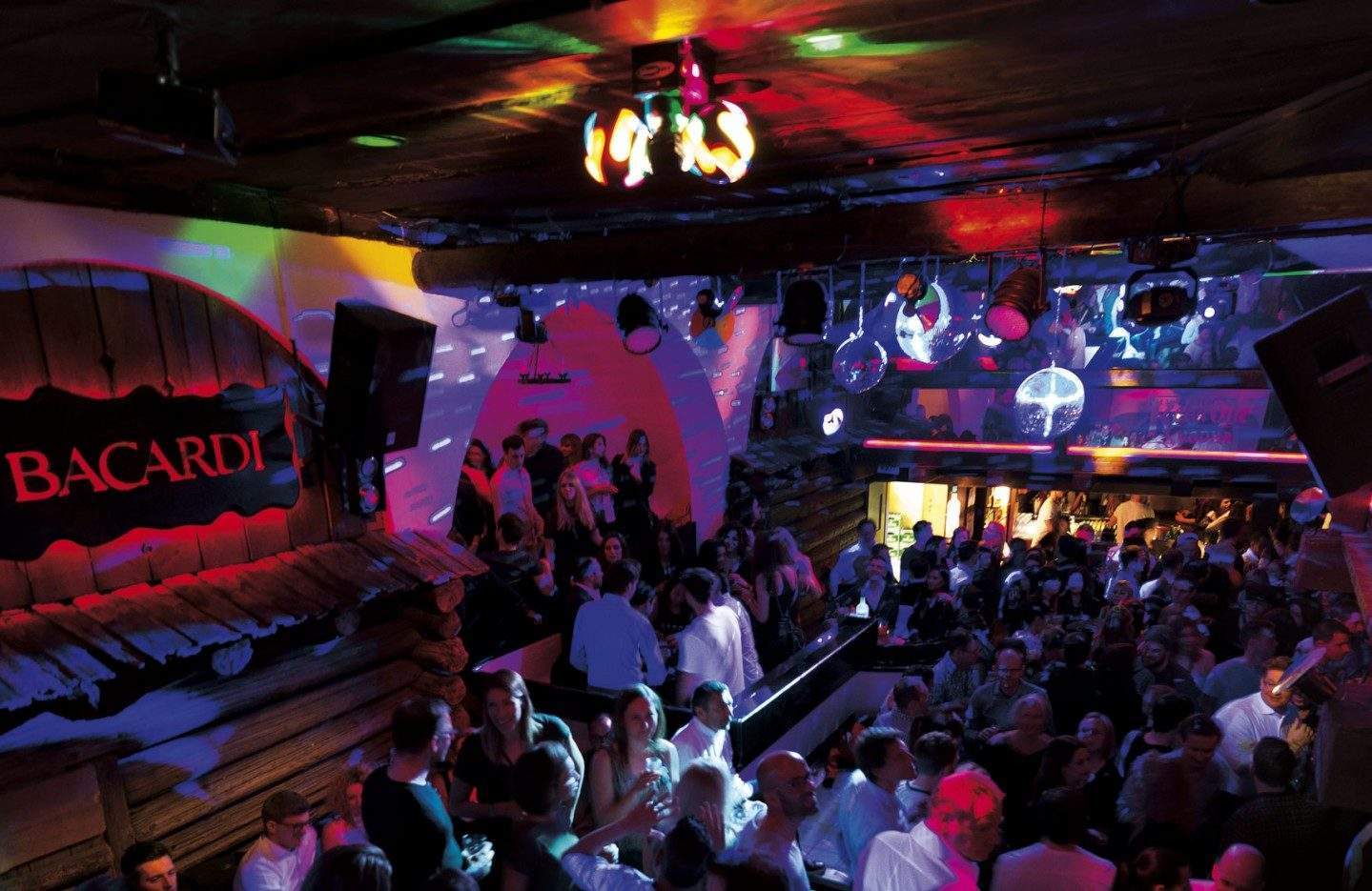 The World Economic Form attracts thousands of people each year to its flagship Davos event, many of whom enjoy nothing more than to spend the day in the life of those in far worse conditions than their own.

Actors help to move participants along a journey that involves forced displacement, loss, a lack of resources, suffering, vulnerability and mental trauma. One of the event’s quirkier offerings, Refugee Run might help you to appreciate why foundations like WEF are trying to improve the state of the world. Don’t worry though, it’s only 75 minutes long and you won’t be pestered to donate money.

Price: free. Sign up on the World Economic Forum TopLink platform or at the Refugee Run desk at the event

If skiing and drinking isn’t your idea of fun, you might have a hard time finding fun things to do. Davos is no Vegas, but its (albeit small) casino does offer some opportunity to blow through some of that spending money.

Offering a wide range of table games, including roulette and Black Jack, as well as a selection of machines, there is plenty to keep you entertained in the evenings.

Given the hustle and bustle of the World Economic Forum, it’s easy to spend time in Davos without stopping to admire the area’s natural beauty. Zugenschlucht is the perfect example of what Davos has to offer.

Walk along the three kilometre gorge between Davos and Wiesen and take in the sites. As this is a geological trail, information signs are dotted along the route. It might sound a little dull, but it’s a good way to get some fresh air and recover from the late nights. 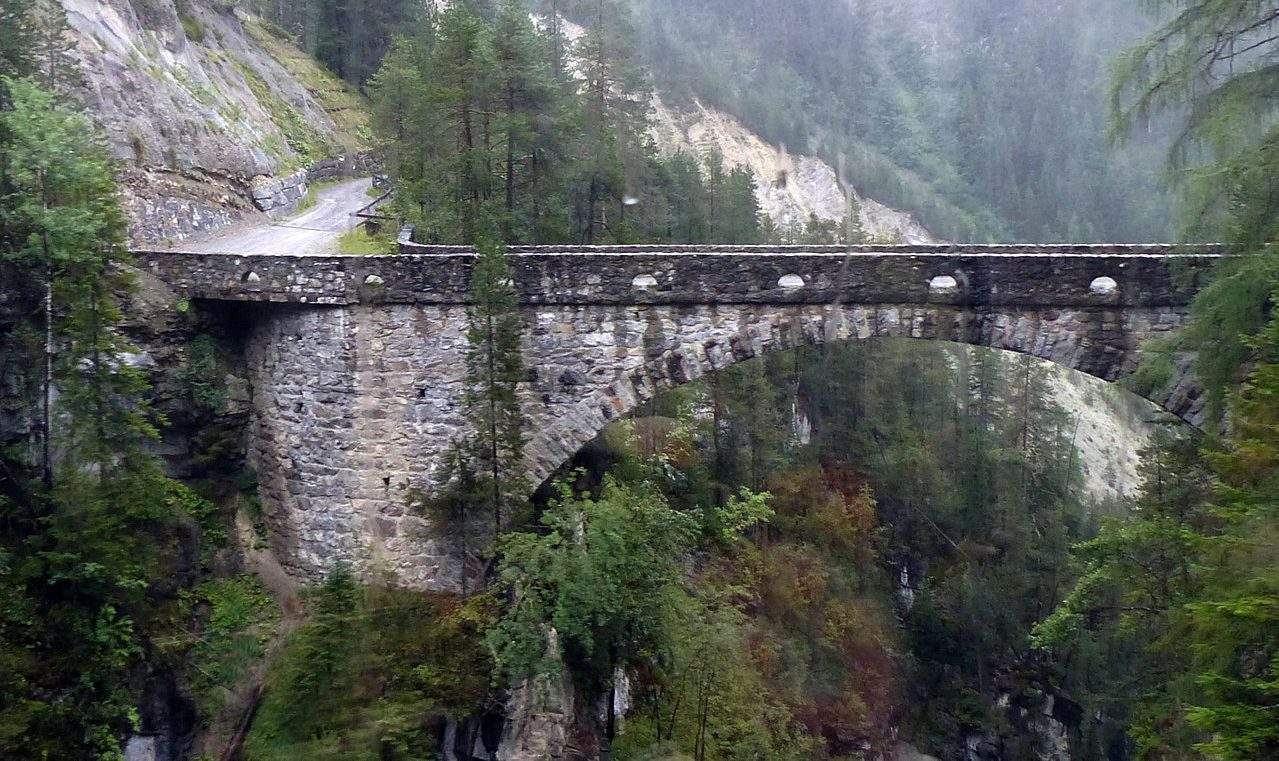