If the last few years has shown anything it’s that the internet of things (IoT) is a clear stepping stone along the path toward what many consider to be the next industrial revolution – call it Industry 4.0, digital transformation, or what you will.

New use cases appear daily, each revealing how the simple act of instrumenting any given business process can open up exciting new opportunities.

But the great myth of IoT, that it alone can miraculously enable factories and cities to run themselves is just that, a myth. Without a view into the business as a whole, IoT is nothing but the instrumentation and reporting of select functions.

Real digital transformation requires not just IoT but IoT in context, which is to say alongside big data and analytics, all fuelled by artificial intelligence.

Instrumentation is of course key, but not just of the physical world. The virtual representation of a business process is as important as a tangible widgets.

Early IoT technology providers SAP, GE, and PTC understood this distinction and the value in bringing both to the foreground with the concept of a digital twin. The idea is pretty simple.

Create a database of every business asset and fortify that repository with as much metadata as possible along with avatars of the connected ‘thing’. The end result is a digital representation of the business itself, which synthesises both the physical and the electronic, the human and the machine, the cloud and wiring closet.

Yet, this idea of the digital twin has not yet found traction beyond smaller, targeted IoT use cases. This is of course in no small part due to a continuing emphasis the here and now, not the future.

A recent GlobalData survey of 3,249 global IT practitioners for example, found that only 45% of annual IT budgets goes toward projects that might actually “change” the business (see Figure 1). The lion’s share of available funds flows into the maintenance of existing systems, to keeping everything running as is. 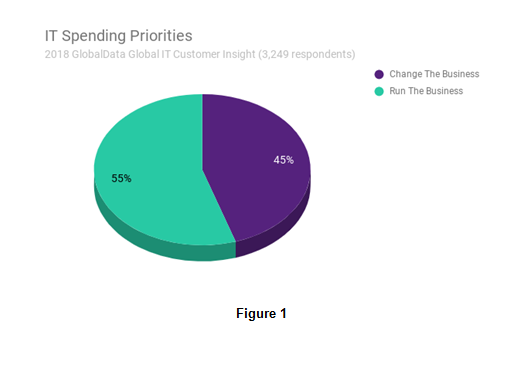 There is good news, however. Within this same, recent survey, GlobalData discovered that companies are spending heavily on laying the foundations of a company-scale digital twin — namely big data and AI.

Compared with a diminutive spending increase between 2017 and this year of only two percent for IoT platforms, these two areas saw a combined increase of more than an 11% increase on average (see figure 2). Big data platforms on their own saw a massive 19% increase in spending over the past year with 69% of IT budget holders setting money aside for data at scale across the enterprise. 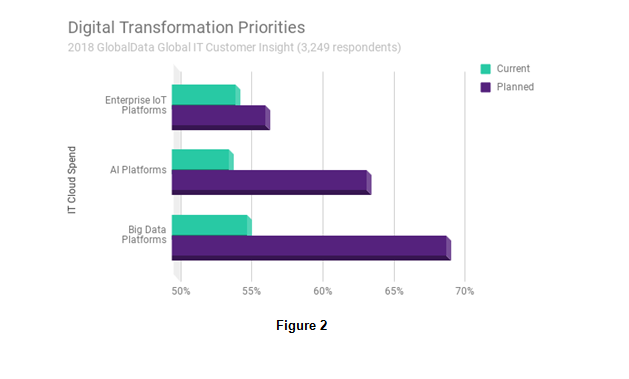 As companies come up to speed on AI and big data, GlobalData expects to see continued efforts by IoT players in driving digital twin-enabling technologies (eg. blockchain) that will help companies understand how those foundational investments can be put to work more broadly.

Put enough of these solutions together, and you’ve got a full-fledge case of digital transformation, proving that it is indeed best to begin with the end in mind.