Boris Johnson might be the runaway favourite in the Conservative leadership race, but there is one area in which Dominic Raab is currently leading the pack – Facebook ad spend.

However, 52 of the 112 ads placed by the MP for Esher and Walton have since been taken down by Facebook for going against its Advertising Policies.

The pro-Brexit Tory leader hopeful has spent more than £56,000 on targeted Facebook ads via his ‘Dominic Raab 2019’ page, according to Facebook’s Ad Library. None are currently active. 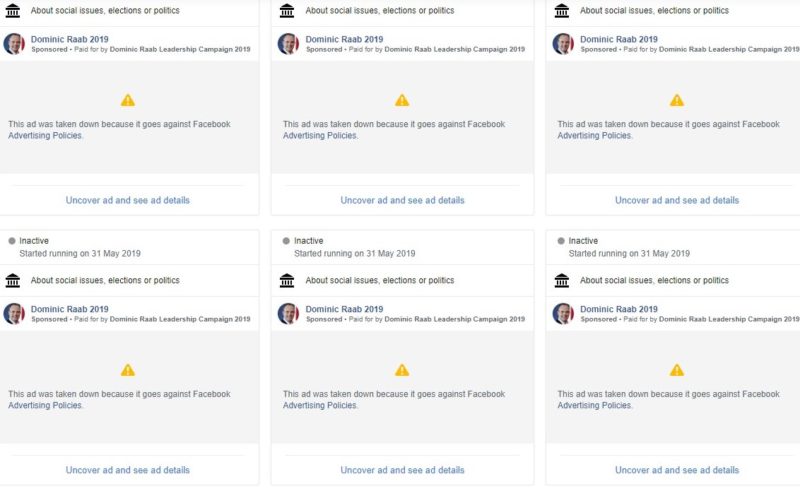 It is unclear why nearly half of his ads were removed by Facebook. The social media platform stipulates that “ads about social issues, elections or politics” must comply with “all applicable laws” and must contain a clear disclaimer.

Verdict contacted Raab’s office several times but did not receive a reply at the time of writing.

These were promoted by Raab’s campaign manager Sir Henry Bellingham and the registered address is 57A Tufton Street, London. 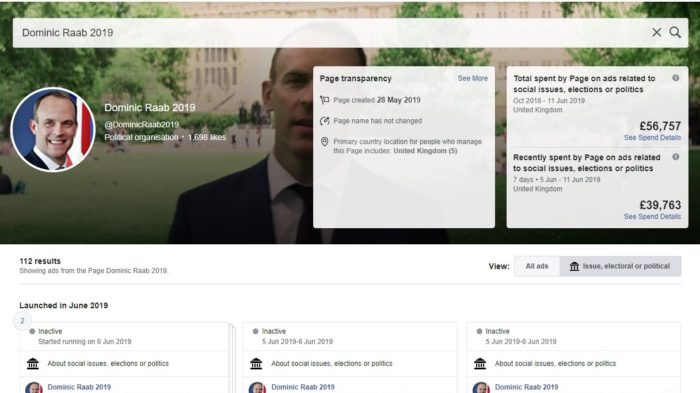 Around half of Raab’s ads are a video in which he outlines his campaign, while the majority of the remaining ads are images with variations of slogans such as “Back Brexit” and “Fairer Britain”. The removed adverts appear almost identical to ones that were not removed, making it unclear why Facebook chose to only take down some of the ads.

Most of Raab’s Facebook ads were seen by people over the age of 55. Some ads have been seen between 200,000 and 500,000 times, costing the Raab Campaign between £5,000 and £10,000. However, it isn’t possible to see which demographics Raab specifically targeted.

How much have the other candidates spent on Facebook ads?

By contrast, Johnson, who secured 114 Tory votes in the first round of voting, has spent £4,429 on Facebook ads. Meanwhile, home secretary Sajid Javid has spent just £393 on one ad to promote his campaign on Facebook.

Other remaining candidates Jeremy Hunt, Rory Stewart, Michael Gove have not spent money to promote their campaign on Facebook.

Raab’s effort was likely to build up early momentum for his campaign, who has a much smaller social media following than Johnson’s 560,000 Facebook followers. A blog post by Who Targets Me on Medium suggested that Raab could have been testing various messages to see which resonated most with users.

Verdict also asked the Raab campaign where the funding came from for these ads, but is yet to receive a response.

Meanwhile, Raab’s own party, the Conservatives, spent just over £160,000 since Facebook began archiving ads, while Labour spent a similar amount during the same period.

Around 120,000 Conservative members will vote for the next leader – and next prime minister – when the candidates are whittled down to two.