US president Donald Trump has blamed violent video games for contributing to US gun violence, following the Parkland high school massacre in Florida this month.

Trump criticised graphic violence in video games for influencing young people at a White House meeting of local and state officials in the aftermath of the shooting. Many of the victims also played video games.

I’m hearing more and more people say the level of violence on video games is really shaping young people’s thoughts. And you go the further step, and that’s the movies.

You see these movies, and they’re so violent. And yet a kid is able to see the movie if sex isn’t involved, but killing is involved, and maybe they have to put a rating system for that.

In the US, games are rated by the Entertainment Software Rating Board (ESRB) system as a legal requirement.

In the European Union, games are governed by the Pan European Games Information (PEGI) system.

These ratings reflect the sexual, violent, horrific, bad language or drug-use content in a game, much as age ratings do for movies. These ratings have legal status and carry expensive fines and legal repercussions if a shop sells to an underage customer. 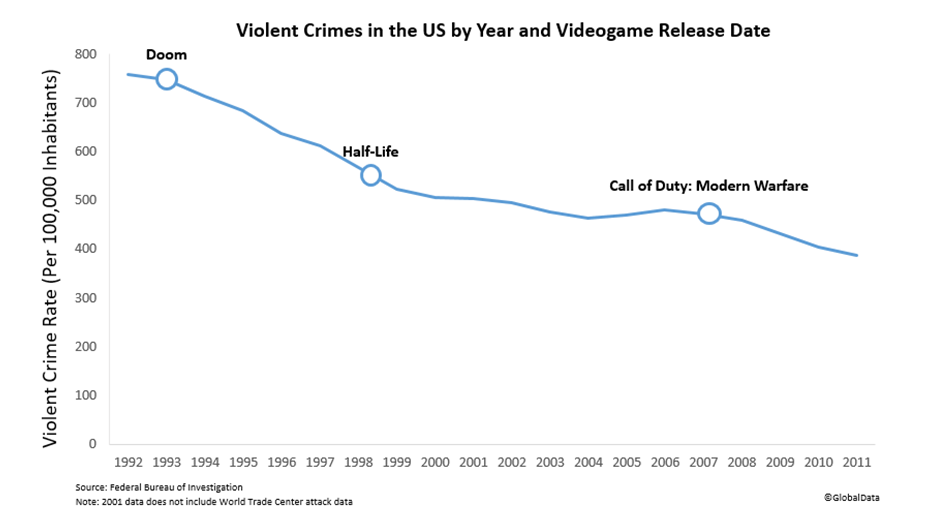 Violent crime stats are on a downward trend in the US, and it’s interesting that the large increases in the sales value, audio-visual quality and prevalence of violent video games has not produced a measurable counter-trend.

Superficial visual analysis is actually more suggestive of a negative association, but in isolation, that kind of analysis is inadequate.

In a study published in February 2016, however, violence in society actually decreased in the weeks following the appearance of a new edition of a popular title such as the Call of Duty series.

Researchers say this could be down to a cathartic effect, or simply that it’s more difficult to be in the position to commit violent acts if you are staying indoors, playing computer games.

Links between video games priming teens and adults for real-world violence through exposure to virtual violence is disputed by many professionals and everyday gamers.

Those arguing a link between violent games and real-world violence often cite the American Psychiatric Association (APA)’s statement or studies on increased aggression and a temporary reduction in empathy and pro-sociality.

However, the studies these statements are based on don’t establish anything close to the popular argument that video games contribute in a significant way to real-world violence.

In a more practical way, these studies tend to show aggression results comparable to many competitive activities, but rarely does the aggression around Little League games get brought into discussions around mass-shootings.

In January 2018, researchers at the University of York found in a series of experiments with more than 3,000 participants, that “there is no evidence to support the theory that video games make players more violent”.

The team found that video game concepts do not make players behave in certain ways simply through exposure, and increasing the realism of violent video games does not necessarily increase aggression in game players.

In an earlier study, in 2008, researchers investigated 6,500 eighth-graders, and investigated how many had a propensity to play violent video games, along with factors such as gender and family relations.

The researchers found that video games, regardless of how bloody they were, had no predictive power when it came to violent behaviour.

Video games are incredibly popular across the world, and especially in the UK, Japan and Australia, generating billions in revenue.

These countries, however, do not have anything close to the frequency and lethality of the US’s mass-shooting problems.

Trump will not directly address the fact that the simple mass availability of guns makes it easier to act impulsively and carry out a terroristic, suicidal or criminal act with such a weapon.