EE/BT launched 5G in six cities in the UK in May 2019 and during the year enabled 5G remote production in Wembley. By doing so, EE and BT Sport were first to broadcast live sports events on 5G in the UK. They have illustrated how video production firms can streamline their video content production process.

‘Portal’, is another 5G experience showcased by EE/BT. The service is enabled by Augmented Reality (AR). By holding up their phones to a door within their local environment (e.g. at their local pub), fans can see a ‘Portal’ overlay in AR through their smartphone. This is basically a virtual tunnel leading them to the pitch during the FA Cup Final. This feature can give customers a more immersive experience.

EE/BT has also developed an additional AR-based 5G facility called ‘Pitch Switch’. As an example, fans at the Mile End stadium can hold up their phones overlooking the pitch and see on their screens live footage from the Wembley stadium overlaying the existing Mile End pitch below them. This facility can bring live big football games to even small communal stadiums. Furthermore, with stationary and mobile 360° cameras, EE/BT was able to live stream a VR game from Wembley to Manchester.

During the 5G City Tour (#5GGearUp) at the Wembley stadium, held in September 2019, GlobalData witnessed 5G speeds of circa 331Mbps downlink and 61Mbps uplink.

By the end of the year, the operator plans to cover an additional ten cities. This will take the total number of 5G sites to 1,500. EE plans to further cover ten more cities by the end of 2020. GlobalData forecasts mobile 5G services to achieve robust uptake over 2019-2024, with adoption levels reaching 26% of the UK population by 2024. 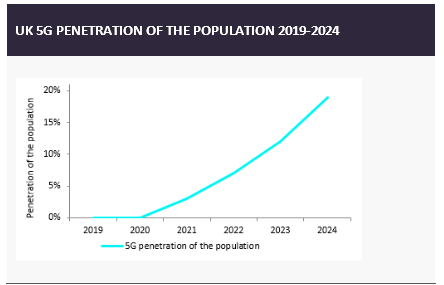