For the first time in its 18-year history, the euro will be one-for-one versus Britain’s pound by early next year, according to the US investment bank Morgan Stanley.

The bank raised its currency forecasts for the euro on Friday, predicting the currency would hit $1.25 in the first quarter of 2018.

The euro has managed to hold above the 1.17 level against the US dollar despite attempts to break lower over the past three days.

Morgan Stanley analysts said the euro had turned into an “asset currency”.

“Our decision to revise our EURUSD call up to 1.25 for 1Q18 is in line with our bullish risk interpretation,” they said in a note to clients seen by Verdict. 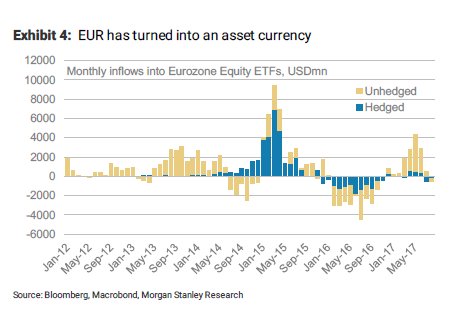 Morgan Stanley also cut its forecast for the Mexican peso to 20 per dollar in the third quarter of next year, saying it would come under pressure ahead of the country’s elections in 2018.

The euro was 0.14 percent higher against the dollar on Thursday, while the dollar hit an eight-week low against the Japanese yen, amid escalating tensions between the US and North Korea.

Earlier this week, US president Donald Trump threatened to respond to North Korean aggression with “fire and fury”.