Yet founder and chief executive Mark Zuckerberg isn’t too celebratory about these figures. In a statement, he said:

“2017 was a strong year for Facebook, but it was also a hard one. In 2018, we’re focused on making sure Facebook isn’t just fun to use, but also good for people’s well-being and for society. We’re doing this by encouraging meaningful connections between people rather than passive consumption of content.”

Facebook’s shares were down 0.12 at the close in New York ahead of the earnings release, with share trading up 1.6 percent after hours. 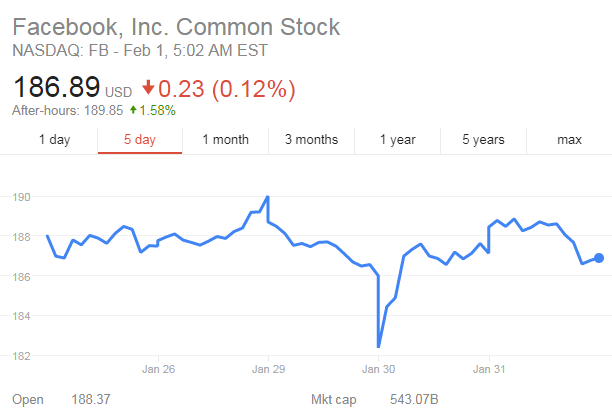 1. Mobile advertising brings in the money

Google and Facebook are known to dominate online advertising; the two companies take in 25 percent of global ad spend worldwide. But it’s interesting to see how it affects the company.

So despite the fake news effects, advertisers are happy to spend more and more with Facebook.

2. You need to spend money to make money

Last year, the company opened a new headquarters in the UK, its biggest engineering hub outside the US. By the end of 2018, it is going to have 2,300 people working there.

3. This is how much Facebook spent on acquisitions in 2017

Facebook loves to buy startups, however, it is cagey about how much it spends. In 2017, the company spent $122m on acquiring businesses, net of cash required and purchases of intangible assets.

This is actually a slight decrease from 2016, when the company spent $123m.

4. People are starting to spend less time on Facebook

Facebook has received a lot of criticism over the past year which is why the company has been making so many changes to its News Feed, pivoting away from video in particular.  Zuckerberg used the Facebook results to encourage people to spend less time on the platform.

As a result of these changes, people are spending roughly 50m hours less on Facebook every day across the world, about five percent down.

By focusing on meaningful connections, our community and businesses will be stronger over the long term.

This is already happening in North America. The company saw its first ever decline in daily active users in the US and Canada, with 700,000 people moving away from the platform.

This is big for the platform which prides itself on constant growth, so it will be interesting to see what impact this has and if the trend continues.