Governments across Europe are focusing on increasing broadband coverage and speed across the region. Europe is one of the leading regions in terms of FBB penetration with30% of the European population having access to FBB in 2020.

To further boost the fixed broadband adoption in the region, the European Commission  set three strategic objectives for 2025 – access to 1Gbps Internet for all public enterprises, access to 100Mbps Internet (to be upgradeable to 1Gbps) for all European households, and uninterrupted 5G mobile broadband coverage for all urban areas and major commuting routes.

In addition, European governments introduced initiatives and supportive funds to deliver Internet services to the population as Internet has become a necessity. For example, Germany introduced the ‘Gigabit Initiative’ in 2017 to roll out converged gigabit-ready networks by 2025, following several phases. The objective of the first phase was to achieve nationwide coverage of all households with at least 50Mbps in 2018. The second phase focused on providing poorly served business parks exclusively with high-speed fiber connections by end of 2019. The third phase is to implement the foundations for nationwide 5G rollout by the end of 2020. 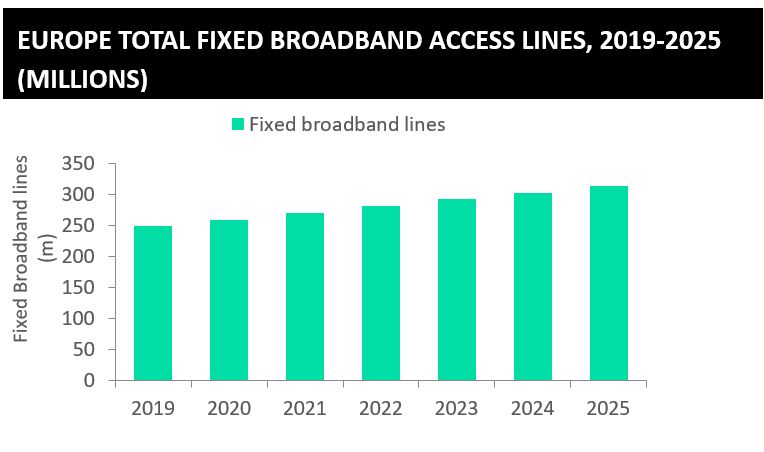 Outside of national initiatives, other mechanisms like funding, wholesale agreements, infrastructure companies (INFRACOs), 5G deployments, network sharing, and rural broadband funding are widely present in the region. For instance, Norwegian fiber operator Lyse has identified a new way to implement the last mile of fiberin sparsely populated areas. It offers discounts to customers who dig the trench for the final fiber cable to their property. This has allowed the company to connect several towns and villages to their service, meaning that the infrastructure is already allocated before it gets implemented and the company can better plan and avoid wasting connections to remote areas where only a few people subscribe. In 2018, over 80% of the company’s customers have opted for the do-it-yourself approach.