Thanks to England’s encouraging World Cup performances, people in the UK are searching for the phrase football’s coming home more than any other time in Google’s history.

Following England’s largely positive performances in Russia, it has become a shared mantra among optimistic fans.

The song has been re-recorded for the World Cups in 1998 and 2010, with re-releases for the tournaments in 2002 and 2006. It is now on course to be the UK’s number one single again, 22 years since it first hit the charts. The motto has become inescapable on social media, with roughly one tweet every four seconds about England at the World Cup containing the phrase “football’s coming home” or “it’s coming home”. 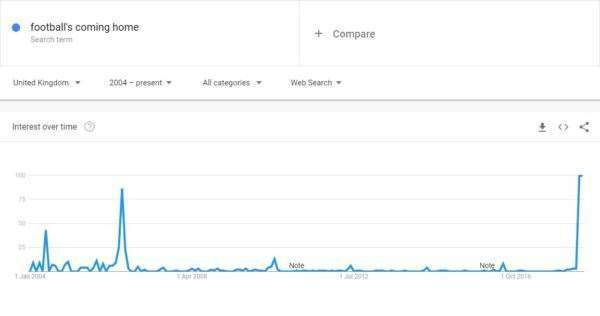 It has already topped the number of searches made when England last made the quarter-finals in 2006. At least 5,000 articles containing the words “coming home”, “football” and “England” have been published in the last week alone.

If England were to beat Colombia in their first knockout game tonight, the upwards trajectory of “football’s coming home” and England fans’ optimism are expected to continue.

England’s World Cup history since the launch of Google 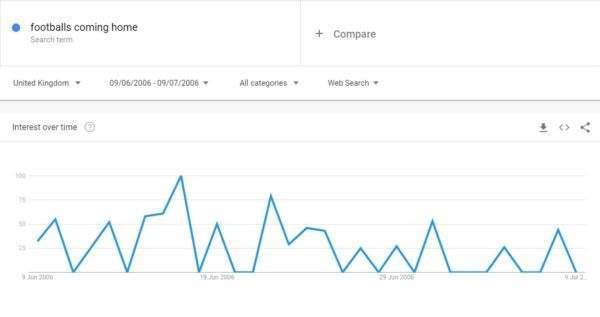 Football’s coming home spiked after England’s 1-0 victory against Paraguay and again after a 2-0 win over Trinidad & Tobago. England were less than convincing though, scraping through to the quarter-finals thanks to a David Beckham free kick. England went on to be knocked out by Portugal on penalties after a disappointing 0-0 draw. It would prove to be Eriksson’s final match as England manager. Searches for football’s coming home subsequently dropped. 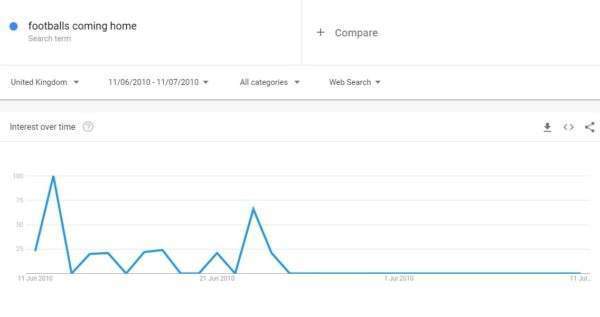 Being in a favourable group gave England cause for optimism and football’s coming home searches spiked. However, England drew 1-1 against the United States after a major goalkeeping error by Robert Green.

A 0-0 draw against Algeria saw England booed off the pitch by their own fans. Winning their final game against Slovenia, they qualified for the knockouts, leading to a resurgence of football’s coming home.

However, at 2-1 down in the next match against Germany, Lampard had a goal disallowed that replays showed to have crossed the line. As England chased the game, Germany went on to score two more, becoming their biggest win against England in a World Cup. Searches for football’s coming home plummeted, and then flatlined. 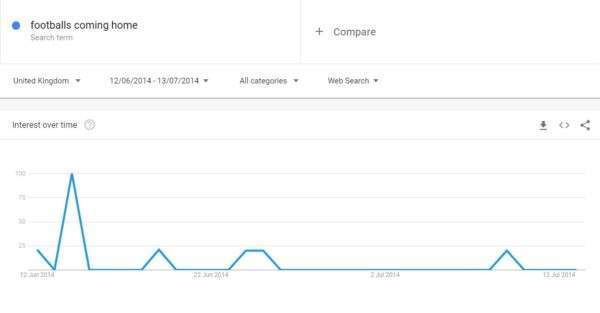 England faced a daunting group containing two other former world champions, Italy and Uruguay. Football’s coming home searches spiked in the build-up for this game, with England’s unbeaten qualifying campaign perhaps a factor. Fans’ hopes were dashed though after a 2-1 loss to Italy in the opening game. Football’s coming home never recovered from this defeat. After a 2-1 loss to Uruguay, the England team knew that they would fail to make it out of the groups. 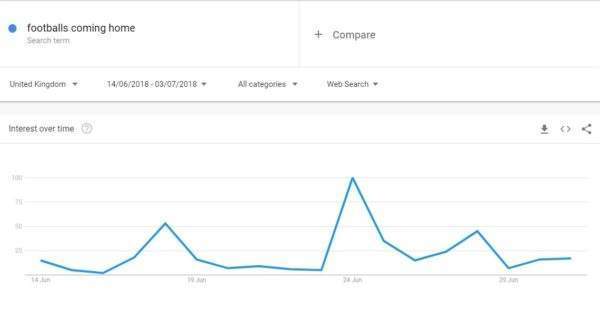 Football’s coming home searches spiked after a last-minute Harry Kane goal against Tunisia launched England off to a winning start. It wasn’t until England’s 6-1 hammering of Panama — England’s record tally of World Cup goals in a single match — that fans’ started to get truly excited.

Although England lost to Belgium, qualification was already guaranteed. Further driving fans’ optimism was the early exit of several World Cup heavyweights such as Germany, Argentina and Spain.

England have also found themselves on the favourable side of the knockout draw. A win against Colombia, made more possible with the absence of James Rodriguez, will see England play Sweden.

If successful, they will then face Croatia or hosts Russia in the semi-finals.

Bookmakers, supermarkets and pubs will be hoping that football’s coming home, with the UK having already seen a World Cup-fuelled spending increase of £720m this summer.

After 52 years of hurt, Google suggests that fans believe there has never been a better chance that football’s coming home.