US stocks on Wall Street have opened higher today after a tech sell of caused a bad start to the second quarter yesterday.

At the open the Dow Jones Industrial Average rose 0.4%, the S&P 500 gained 0.5% and the Nasdaq climbed 0.75%. Today’s bounce back comes as Wall Street fell into correction territory yesterday, with the three main stock indices now in the red for the year so far.

Beijing announced retaliatory trade measures on Sunday in response to Washington’s plans to unveil a fleet of new trade tariffs on Chinese high-tech imports this week.

China announced up to 255 duties on 128 American good including pork, apples and steel pipe, escalating a looming trade war between the two countries.

Beijing’s new set of customs duties followed Trump’s decision to slap taxes on imports of steel and aluminium in February, followed by US plans unveiled for 25% tariffs on some Chinese goods in March.

US tariffs up to $60 billion on tech imports related to intellectual property theft from US companies are expected to be laid out this week.

Around $45 billion was wiped from Amazon’s market value on Monday as shares plunged 6% after Trump struck out at the retailer for overpricing deliveries through the US Postal Service. 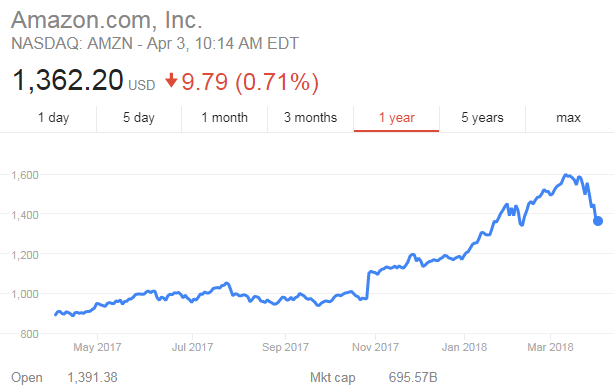 Amazon had previously promised to review its pricing.

Tweeting for the fifth time about Amazon in a week, Trump today claimed that Amazon is not paying enough tax, and is taking business away from US retailers and the US Post Office.

After Trump’s latest Amazon-related tweet and music streaming service Spotify’s trading debut, its expected investor focus will remain on tech for the day.