Interest in horse racing has dipped in recent years, but the Grand National remains one of the biggest occasions in the British sporting calendar.

For bookmakers, it’s the biggest. Bookmakers anticipated that £250 million would be wagered on last year’s Grand National.

It is the day the nation goes to the bookies. Grand National day knocks every other day of the year into a cocked hat.

It is estimated that a quarter of British adults wager on the race. However, the majority of bets are placed based on little more than the name, colours or number of the horse.

However, according to the bookmakers, you shouldn’t be putting your money on Chase The Spud this year.

Anibale Fly (10/1) is the bookies’ favourite to win the 171st running of the Aintree horse race. The eight-year-old horse is expected to be closely followed by Total Recall (11/1) and last year’s favourite Blaklion (12/1).

To evaluate the actual odds of Anibale Fly crossing the finishing line first, Verdict looked back at the past 50 years of Grand National races.

How likely is it that the bookmakers will be right?

Betting on the favourite isn’t necessarily the bet best.

Just seven out of the 66 horses picked as favourites prior to the race over the last 50 years have actually finished in first place. This means that the favourite has an 11% chance of winning each year.

However, it is three times more likely that the favourite horse will fail to finish the race.

Of the 66 favourites, 24 fell, lost their jockey or stopped running before making it to the finish line. This means that there is a 36% chance that you will lose your wager before the race even comes to an end.

However, if you place an each-way bet (as 74% of people do) then the chance of securing a return increases to 34%. A total of 22 of the 66 favourites have finished up in the top three in the previously 50 races. 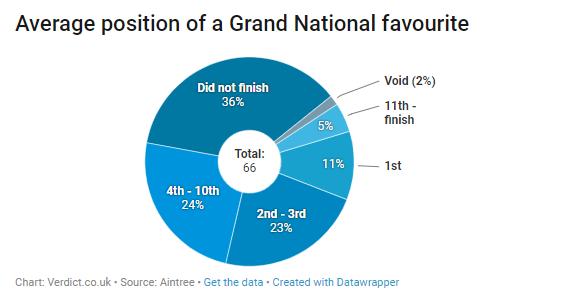 If not Anibale Fly, then what horse should you bet on?

Looking back at the past 50 winners, data shows that the most likely winner will have odds of 23/1.

Of the 40 horses set to run on Saturday, three have been given similar odds.

Minella Rocco and Ucello Conti currently have odds of 20/1. However, I Just Know comes closest with odds of 25/1.

However, if you’re going to ignore the numbers and stick to betting based on a horse’s name, number or colour, you should probably opt for a horse with red in its name. Since the Grand National started in 1839, five races have been won by horses with red in their names: Red Alligator, Red Marauder and Red Rum (three times).

Unless you count Vieux Lion Rouge, that limits you to just one horse, Captain Redbeard.

Three horses with silver in their names have won the race, as well as one gold and one teal.

Grand National 2018: All the details

The 171st Grand National will be held on Saturday, 14 April. The race is set to get underway at 5:15 pm London time at the Aintree Racecourse.

Forty horses will attempt to navigate over 4.5 miles of track and 30 fences on their way to the finish line as 60 million people watch on.

Those in the United Kingdom will be able to watch the race live on ITV.

Tickets have officially sold out. However, there are some available on reseller sites such as Stubhub. Buying from these websites do some with an element of risk though.

The owner of the winning horse will receive £561,300. A total prize pot of £1 million set to be distributed between the top ten runners.