For those making a New Year’s Resolution the pledges are usually fairly standard. In terms of health-related ones, the options are narrowed down even more. Eat better, exercise more, drink less: same old, same old.

But one thing that most health enthusiasts probably won’t be pledging is “breathe better”.

As an involuntary process, most people don’t spend a lot of time thinking about breathing. Unless you’re a smoker or visiting a room filled with a giant cloud of gin and tonic, it’s not an especially diverting subject.

However, considering we breathe to live, perhaps it’s something that’s worth thinking about a little more.

With more and more people living a metropolitan existence, the question of air quality has never been more pressing.

However, the real battle to breathe healthily starts at home, say Airboxlab, the creators of Foobot. Named after Foo Dogs, guardian animals found outside Chinese temples who symbolically protect the temple from harm, the Foobot aims to do the same with customers homes; protecting them from bad air. 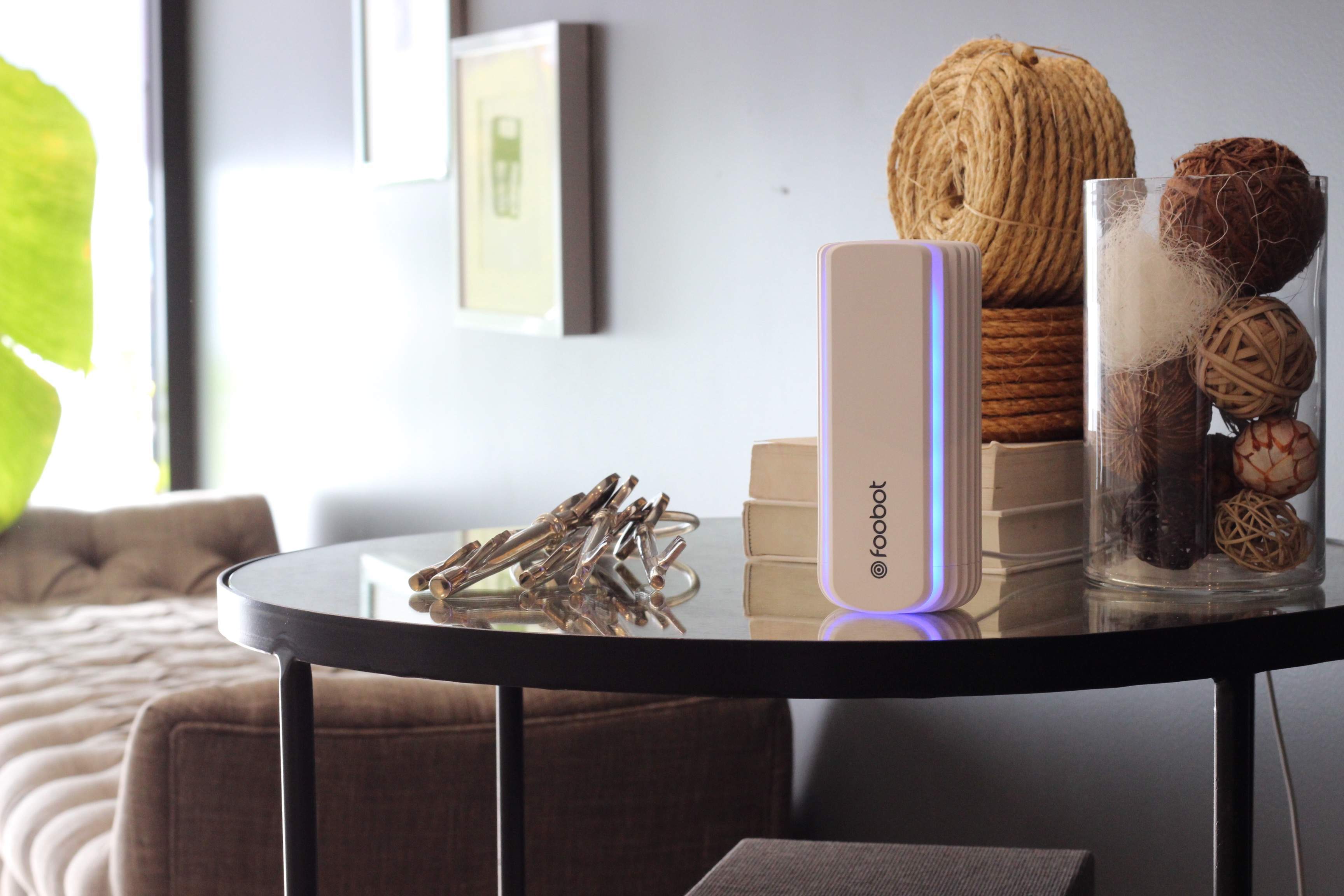 Airboxlab provided Verdict with a Foobot to trial the product and we’ve found ourselves constantly checking the device to gain better insight into our air. Being notified when air quality improves has helped motivate us to take action on the issue. And that’s exactly what the product’s creators are hoping for.

The truth is we spend most of our time indoors and due to the confinement indoor is usually worse most of the time. Normally this is invisible and so to make it visible we created Foobot.

The gadget is a 17cm tall little white block lit up by two LED strips up its sides. It’s unassuming enough, but the creators are hoping it will spark a revolution in how we think about our breathing. Put simply, the Foobot monitors the quality of the area around it.

It can sense temperature and humidity, but also volatile organic compounds (carcinogenic chemicals) and particulate matter (large particles in the air which can cause asthma, cardiovascular disease, and even lung cancer) in the home.

Once it tests the local air, the device provides real-time updates via it’s LED strips.

The whole thing is very simple to understand. Three blue lights means you’re breathing top quality air. Two blue lights is still fine. One blue light is good but could be better. The real trouble starts when the Foobot begins to emit an orange glow.

This means that it has detected the air quality falls below World Health Organisation recommendations. As with blue, there are three grades of orange lights.

Not only is this little gadget pretty smart, but it’s also, in a very modern sense smart. The Foobot connects to wifi and transmits its findings into the cloud.

A dedicated smartphone app allows users to pull that data and view it in the form of graphs and charts.

You can see these patterns. And the patterns make you understand better what is affecting your indoor air pollution.

For example, if you’re not at home but you have a cleaning person, you would definitely see a pollution spike because the vacuum cleaner moves all the dust up in the air and it would be sensed by Foobot. It’s the same with bleach, detergent, compared to an organic product, you’d see the difference.

Even days after, you can notice the spike and question ‘what was I doing to create that spike?’ 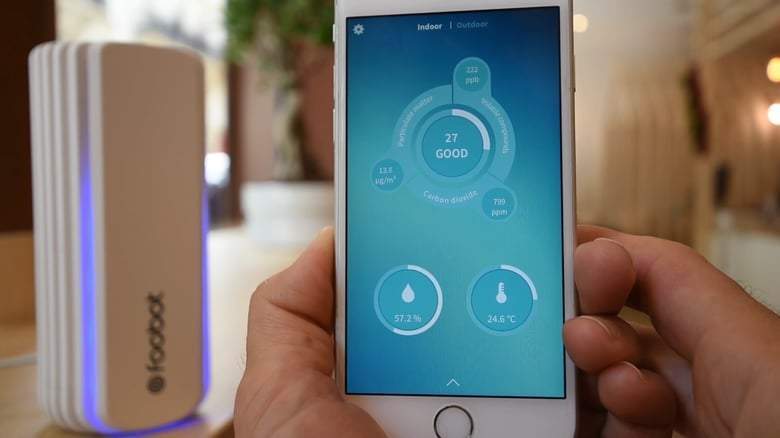 But why focus on your air quality?

Well, studies have shown that there are numerous health benefits to breathing good quality air. For starters, better quality air means it’s easier to breathe while sleeping, contributing towards a more restful night’s sleep. In addition, knowing how much particulate matter is in the air can help reduce allergic reactions from dust mites, pollen, and dust.

Good air is also proven to increase focus and productivity.

For some people though, the consequences of bad quality air can be far more serious. The Foobot came into existence due to the experiences of Airboxlab’s founder and CEO, Jacques Touillon. Unfortunately, the businessman’s son had an asthma crisis while he was young, landing the young man in hospital.

Touillon realised that something in the air of their family home was causing the issue, but couldn’t work out what. In response, he created Foobot to provide a visual indicator of air quality.

The product was originally aimed at those with asthma and respiratory problems, but, according to LaFond, it has found popularity among health and tech enthusiasts.

In his role as chief marketing officer, LaFond corresponds with users daily. He has learned, during his time with the company, that metropolitan customers are seemingly the most concerned about air quality.

“Anyone who lives in a city thinks that their air quality is really poor. This is not necessarily the truth. Basically, a city like Paris and London are not equivalent. And Delhi and Mumbai are not providing the same air quality to their citizens. There are huge differences.

“Some cities are by the sea. For example, Marseilles, is by the sea but it’s polluted because it’s surrounded by mountains. So on days when there’s no wind, there’s pollution gathering. Any cities that are surrounded by high mountains is polluted too.

“The topography of cities has a huge role to play. And cities are not necessarily very polluted, it depends on the wind and the topography. So the only way you know whether you’re breathing good air or bad air is to use instrumentations. A consumer product like Foobot is enough to have an idea.” 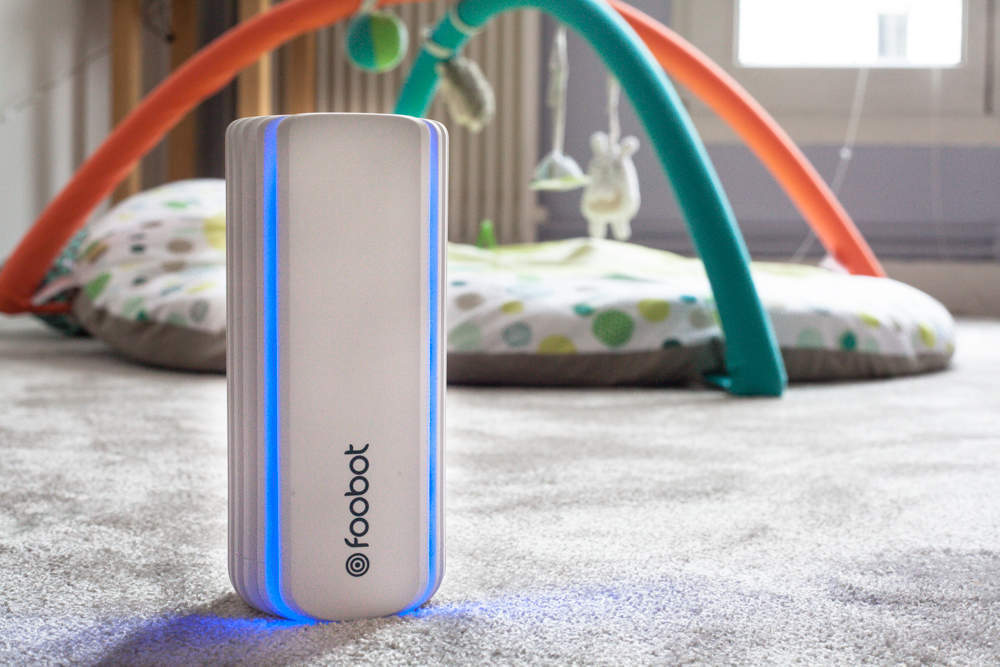 LaFond relayed the story of Mark Hughes, a Londoner who found that his Foobot was detecting huge spikes in volatile organic compounds every morning at 6.30am. Early morning spikes are often to be expected.

When people wake up in the morning and start moving, breathing, and potentially kicking up dust around their homes, a spike in poor air quality can often be detected.

The interesting thing about Hughes’ case, LaFond explains, is that his major spike took place around an hour before he woke up.

One morning he woke up early and he realised there was a bus stopping outside his window (he was living on the ground floor) with the engine still on for about 20 minutes before starting its journey. And so he finally understood that it was coming from the outside. So he closed the window while he was sleeping.

Unfortunately, one feature the Foobot doesn’t contain is the ability actually do anything about the air quality. Considering a top quality air purifier can be quite costly, this was probably a business decision to keep the Foobot’s price low.

Thankfully though, improving air quality is rarely particularly difficult. In fact, LaFond is asked about it so much he has created an eBook (available on the Foobot website) on how users can improve their air quality.

Some of his tips include simply opening a window, wiping one’s feet before entering a room, drying clothes outside, and using an extractor fan while cooking.

“If it’s a particle spike, an air purifier would work great. That’s what air purifier are made for. They filter the air from the very fine dust. And people should be very careful about the kind of air purifier they use. One with a HEPA filter is good. That’s the kind of filter that stops very small particulates which is the worst kind of pollution. The most harmful. The worst pollution is PM, particulate matters.

“Every day there are new studies showing the harmful effects of PM, cancer for example. That’s the most harmful stuff in cigarettes. It’s not the chemical components, it’s the size of the particulates that matter the most. If it’s burnt food or something less organic, I won’t say it doesn’t matter, but the worse affects are done by the size of the particle.

“If you have a VCO spike (volatile organic compounds) or to say it differently, gases or chemicals, it works great to just open the window. You just need to renew your air. But it would make sense to wonder where that nasty gas is coming from. Sometimes it’s the glue in your plywood furniture. Do you know the smell of a new flat with new carpet? If the contractor didn’t pay attention to the glue he used, that type of stuff releases tonnes of VCOs into the air. Your nose can tell. But sometimes your nose can’t tell, and that’s where Foobot is the most useful.”

The best plants for this job, according to LaFond are as follows: 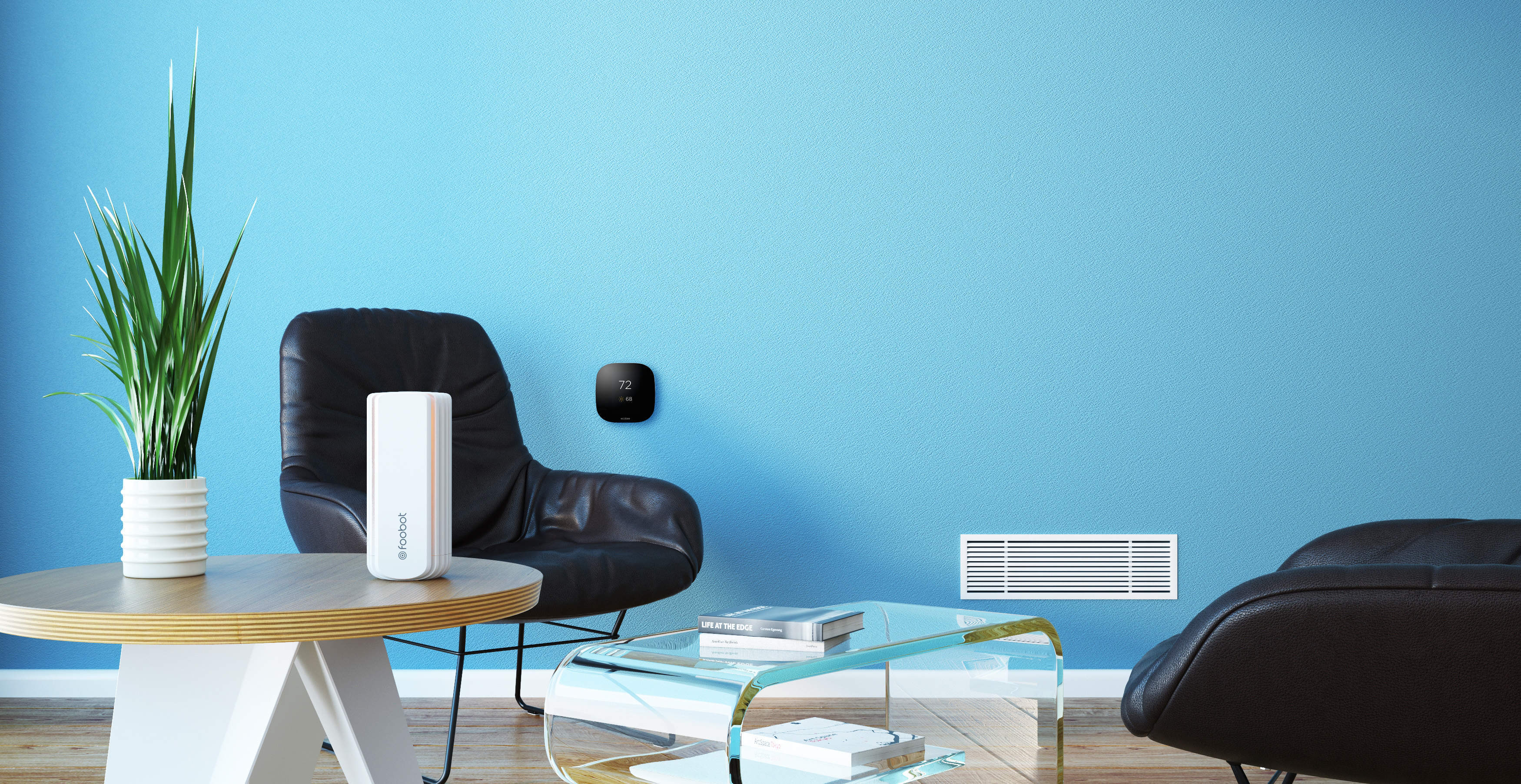 But while Foobot can’t necessarily change air quality by itself, its smart credentials can help it in this regard. The device is designed to sit among a whole cosmos of interconnected devices.

It can be teamed up with the Amazon Echo, Phillips Hue lightbulbs, and various smart thermostats to increase its efficiency manifold. LaFond is particularly keen to talk about his company’s most recent connected device, the Google Nest:

“When Nest is set up by your contractor it is plugged onto your heating, ventilation and air conditioning system. The ventilation aspect interests us a lot.

“It means that when you connect your Foobot and your Google Nest, the latter can take over the ventilation system. Whenever your pollution at home is rising above a threshold that is defined by the World Health Organisation, it will boost the ventilation rate until the pollution level gets down below that threshold.

“That’s super cool, but what’s even more cool is that we studied, a few weeks after releasing this feature, 106 users who had set up this home automation. We found out that for VOCs, the time spent in polluted air was reduced by 35%. And for particulate matters it was even greater, the time spent in poor air diminished by 53 percent thanks to this automation. It really was much better than we could have ever expected.”

Breathing better isn’t necessarily a difficult thing, it just means creating better habits. However, with the internet of things becoming so ubiquitous in today’s homes, it’s never been easier to make those habits stick.

Foobot can be purchased from the official website in the US and Europe, and Amazon in the UK