The German meal kit company HelloFresh share price has leapt after the company revealed a 52% increase in revenue in 2017 and said it expects to break even by the end of this year.

Losses for HelloFresh — which provides portioned ingredients and recipes to customers to prepare home cooked meals — narrowed year-on-year from €70.1 million in 2017, compared to €82.6 million in 2016.

2017 marks the most successful year for our business to date. Not only did we successfully list our company on the stock market but we also significantly improved all our key metrics.

We see that people’s tastes have become much more diverse. These are very significant customer groups that we were unable to reach until now. This is a segment that is super attractive, both in terms of pricing and in terms of size.

We come from a very high level of sales growth. But if you look at our peers in ecommerce and technology we are still at the upper limits of growth rates. At the same time, we want to push the whole company towards profitability. 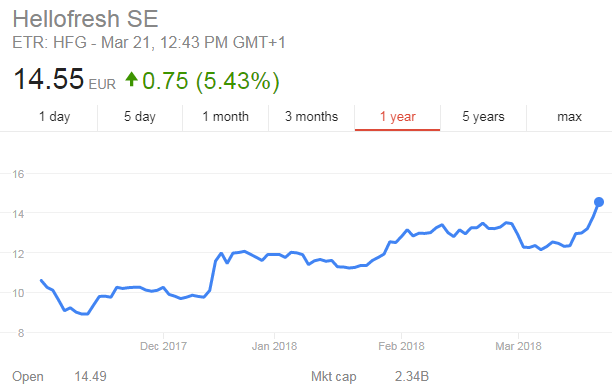 The sustainability of the meal kit model has been questioned since ecommerce giant Amazon entered the $800bn US grocery market with Amazon Fresh in 2017 and HelloFresh is now competing with struggling US rival BlueApron and Amazon.

HelloFresh generates 60% of its revenue from its US operations.

BlueApron made its stock market debut on the New York Stock Exchange in 2017 — claiming the title of the worst performing major US IPO that year, with stocks plunging 70% below the offer price.

HelloFresh is active in ten countries, including the US, UK, Germany, the Netherlands, Switzerland and Canada.

It had 1.45 million active customers at the end of last year, and delivered almost 40 million meal kits over the fourth quarter of 2017.

HelloFresh yesterday announced its plans to buy organic US rival Green Chef in Colorado, in a bid to overtake BlueApron and boost revenues by $15 million a quarter.