Oil giant BP has posted a 71% jump in first-quarter profit, driven by a surge in oil and gas prices and sending the BP share price higher at the London open.

BP reported net income of $2.6 billion, handily beating the $2.2 billion forecast by analysts in a company-provided survey, and up from $1.5 billion a year earlier. BP posted profit of $2.1 billion in the fourth quarter of 2017.

Moving through 2018 we’re determined to keep delivering our operational targets and maintaining capital discipline while growing cash flow and returns.

Over the longer term, our new lower carbon ambitions, including clear targets for our own emissions, will help ensure that all of BP is also focused on advancing the energy transition. 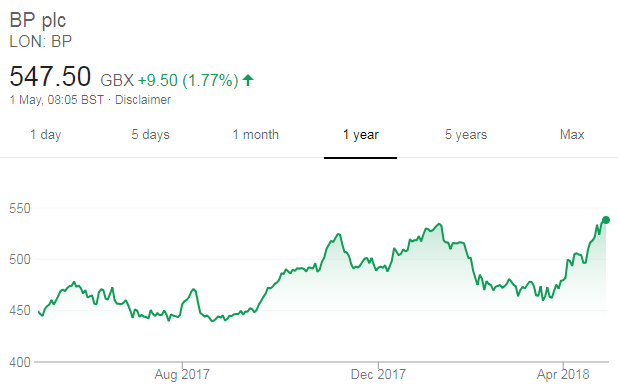 The oil price has climbed to an average of almost $67 a barrel in the three months to March, up a quarter from a year ago. Brent crude, the international benchmark, has since rallied further to four-year highs above $75 a barrel.

Yesterday a Reuters survey found that Saudi Arabia led oil cartel Opec pumped 32.12 million barrels per day in April, down 70,000 barrels per day from March. The April total is the lowest since this time last year.

Opec has said it wants to reduce output by about 1.2 million barrels per day as part of a deal with Russia and other non-Opec producers to get rid of excess supply in the market.

London-based BP this morning said its debt pile rose following a $1.6 billion payment to settle remaining lawsuits following the deadly 2010 Deepwater Horizon spill in the Gulf of Mexico — which has so far cost it more than $65 billion.

BP launched seven oil and gas fields in 2017, a record year, and was set to inaugurate five more projects this year including in Egypt, Azerbaijan and the UK North Sea which will help it boost production by 800,000 barrels per day by 2020, most of it gas.

Meanwhile, BP rival Shell last week reported a 42% rise in profits for the first three months of the year.