A breakthrough computer chip design is laying the foundations for computers with the same structure as the human brain – a technological feat that would have a profound impact on all aspects of hardware development.

Developed by an international team of researchers from the Universities of Oxford, Exeter and Münster, the chip contains a network of artificial neurons and synapses that respond to light, rather than electrical inputs. This allows the chip to mimic the behaviour of human neurons and their synapses.

“Our system has enabled us to take an important step towards creating computer hardware which behaves similarly to neurons and synapses in the brain and which is also able to work on real-world tasks,” explained study lead partner Prof. Wolfram Pernice from Münster University. 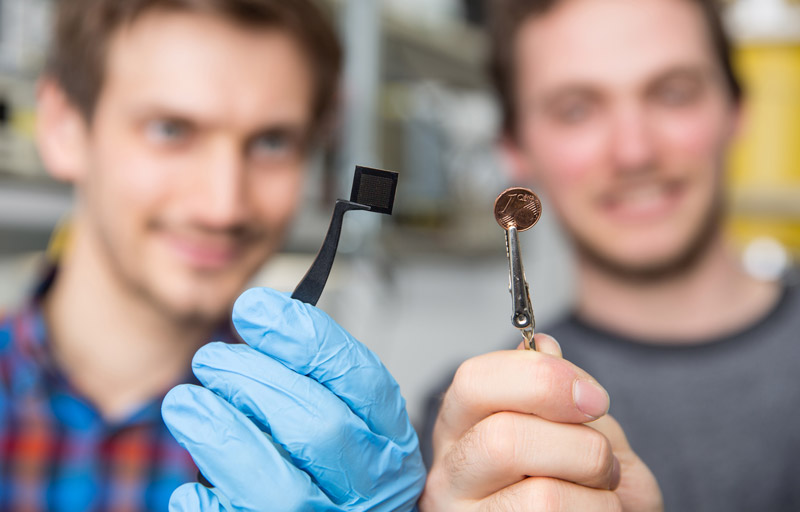 Researchers show the size of the current chip, which is roughly the same width as a one cent coin.

The benefits of a computer chip based on the human brain

While the current chip is very small, consisting of just four artificial neurons and 60 synapses, its successful development represents a profoundly important step towards developing hardware that stores and processes data in the same way as the human brain.

This means that if computers that use artificial synapses instead of conventional processors and memory can be developed, it would transform their capabilities.

The researchers successfully demonstrated that a computer with such a system – known as an optical neurosynaptic network – would be capable of both ‘learning’ information and then using this to recognise partterns and perform computations.

“This integrated photonic system is an experimental milestone,” said Pernice.

“The approach could be used later in many different fields for evaluating patterns in large quantities of data, for example in medical diagnoses.”

The research, which is published today in the journal Nature, is a very early step, with the team now planning to scale up the number of artificial neurons and synapses. However, if it progresses successfully, it could prove to be foundational to a whole new avenue of hardware design.

Read more: Nanorobots in the brain may make it possible to access the internet simply by thinking