Bitcoin proved to be an incredibly lucrative investment for those that bought in early, with prices rising throughout the second half of 2017 to a December peak of more than $19,000. However, 2018 brought the popular cryptocurrency crashing back down to earth.

The general consensus among crypto experts seems to be that Bitcoin won’t reach its peak again. However, blockchain, the underlying technology that drives bitcoin and other cryptocurrencies, still offers plenty of promise for investors.

If you’re considering investment in blockchain, you should look beyond the endless stream of Initial Coin Offerings (ICOs) and buy into those that are exploring blockchain as more than a digital currency.

If you’re considering investing, it is probably a good idea to turn to the experts for advice.

While we’ve all been counting our losses as crypto prices plummeted, venture capitalists have been looking at new ways to get in early on blockchain technology.

According to a recent report by blockchain research group Diar, venture capital investment in blockchain and cryptocurrency-focused startups almost quadrupled in 2018, climbing from a total investment of $1bn to $3.9bn.

According to a report by technology industry network Spiceworks, some 25% of European businesses plan to invest in blockchain over the next 12 months, as well as 9% of North American businesses. That is only slightly less than the percentage of businesses that plan to invest in the Internet of Things (27%) and artificial intelligence (26%), which tend to receive far more attention.

With industries increasingly turning to blockchain to streamline operations, ensure transparency and improve security among many other uses, these startups and their technologies will becoming increasingly more attractive in the coming years.

While you won’t be partaking in the short-term trading of extremely volatile cryptocurrencies, investing in startups can prove lucrative in the long term. Just think – Facebook, Twitter, Instagram and Snapchat weren’t always multi-billion dollar businesses before social media took off, much like Microsoft and Apple before computers.

Industries that will benefit most from Blockchain

There is no shortage of potential applications for blockchain technology. According to CB Insights, there are more than 42 major industries that blockchain could disrupt. However, the need for and feasibility of these implementations vary greatly from industry to industry.

Major business consulting company McKinsey recently evaluated and stress tested the impact and feasibility of blockchain technology for 14 different industries to determine whether blockchain implementation was worth the time and costs for particular industries.

The study found that the public sector would get the most benefit out of introducing blockchain technology. Likewise, implementing the technology was also deemed to be among the top three for feasibility, suggesting that it would not be difficult or time-consuming to implement in the sector.

Blockchain was deemed to offer the second most promise to the technology, media and telecoms sectors, and was equally as feasible.

While, unsurprisingly, financial services led the way for feasibility, with cryptocurrency already proving that the technology can be successfully used in the industry, it was only deemed to be moderately impactful.

The least impact and lowest feasibility was found in the arts and recreation sector, with manufacturing also deemed unlikely to find use for the technology.

Mining, property, agriculture, automotive, transport and logistics, insurance, retail, utilities and healthcare were all found to have moderate potential use for blockchain, but all fell short for feasibility. 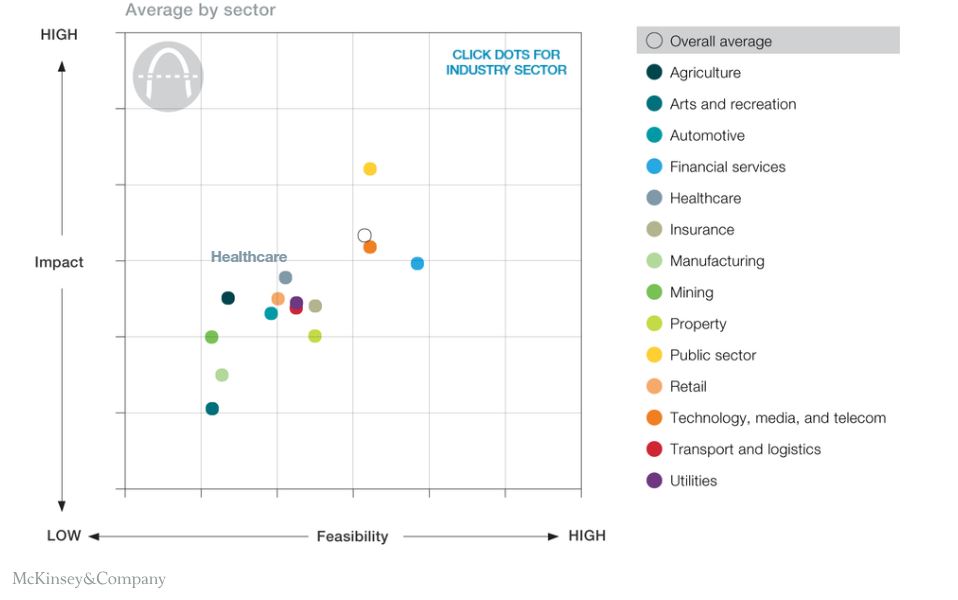 If you don’t feel confident selecting where you should be investing your funds, Exchange-Traded Funds (ETFs) will do the hard work for you.

There are numerous investment funds that hold collections of blockchain-related stocks, bonds and assets. These investment funds are publicly traded on a stock exchange, allowing anyone to invest in the companies held in the fund.

These managed funds, watched over by people that believe in the technology and take care to invest in the right companies, provide an easy route into blockchain investment.