Gulf powers and Israel have welcomed US President Donald Trump’s announcement to withdraw from the Iran nuclear deal last night.

Oil prices hit a three year high on the assumption that renewed sanctions will disrupt the flow of Iranian crude oil with Brent Crude rising 2.2% overnight to $76.50 per barrel.

As the second largest member of the Organisation of the Petroleum Exporting Countries (Opec), Iranian crude exports and output have multiplied since the deal was reached in 2015.

This spike in the oil price will prove a windfall for other Opec members, including Saudi Arabia’s state-owned oil company Saudi Aramco, which lost a slice of the oil market to Tehran in the wake of the nuclear deal.

The Iran deal was brokered by Trump’s predecessor Barack Obama in 2015 and lifted sanctions on Iran in return for Tehran agreeing to curb its nuclear enrichment programme.

The main importers of Iranian crude are Asian heavyweights China, India, Japan and Korea, which may be forced to turn to Saudi Arabia or risk falling afoul of new US sanctions. 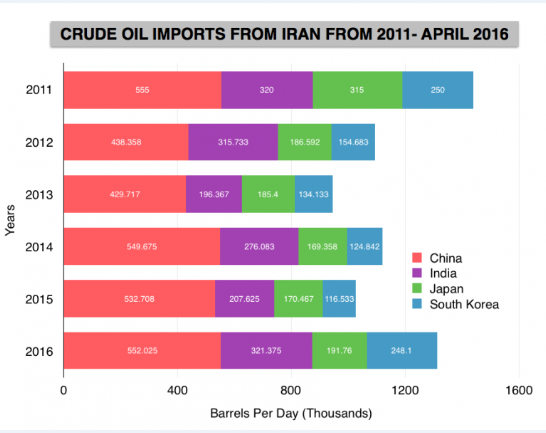 Another major non-Asian importer of Iranian crude is Turkey, whose imports surged 142% in the first seven months of 2017, compared to the year before, Turkish Energy Market Regulatory Authority (EPDK) data showed.

The Iran deal caused Iran’s oil production to shoot up by 800,000 barrels per day, to 3.82 million, making it the sixth largest oil producer in the world, according to Reuters estimates.

Meanwhile exports more than doubled to record highs of 2.6 million barrels per day in April 2018, driven by shipments to the European Union, with France, Italy, Spain and Greece taking the bulk of imports.

In a televised speech on Tuesday, Trump gave EU signatories of the Iran nuclear deal until 12 May to rectify what he called flaws in the deal, before the US will reimpose sanctions in full force.

Trump has frequently criticised the accord for not including Iran’s ballistic missile programme, its role in regional wars, and its nuclear ambitions beyond 2025.

It is not clear how sanctions would impact Iran’s trading partners, but in the past, sanctions have hit companies doing business with Tehran.

In remarks made at the White House, Trump said:

We will be instituting the highest level of economic sanction.

Any nation that helps Iran in its quest for nuclear weapons could also be strongly sanctioned by the US.

Gulf powers are this morning celebrating Trump’s decision, with Saudi Arabia, the UAE, and Bahrain making statements signalling their approval.

As the world’s largest exporter of petroleum and Iran’s arch-rival in the region, Saudi Arabia’s oil-rich economy has struggled with dwindling oil prices over the last two years.

In a statement carried by Saudi Arabia’s state news agency, SPA, the Saudi Government called for the reinstatement of sanctions and crackdowns on Iranian influence in the region in Syria and Yemen, where Gulf powers are fighting in a multi-pronged war against Islamic State and Iran-backed Houthi rebels.

The Iranian regime however, took advantage of the economic benefits afforded by the lifting of sanctions, and used them to continue its destabilising activities in the region, especially by developing its ballistic missiles and supporting terrorist organisations in the region, including Hezbollah and the Houthi militias as well as repeatedly targeting international shipping lanes in a blatant violation of UN Security Council resolutions.

The Kingdom reaffirms its support of the strategy previously announced by President Trump towards Iran, and hopes the international community will take a firm and unified stance against the Iranian regime, and its destabilising aggression in the region, its support to terrorist groups, particularly Hezbollah and the Houthi militias, and its support of the Assad regime — which has committed heinous crimes against its people that led to the death of more than half a million civilians, including through the use of chemical weapons.

Based on this position, the Kingdom asserts its commitment to work with its partners in the United States and the international community to reach the goals announced by President Trump, and the necessity to address the dangers posed by the policies of Iran on international peace and security through a holistic approach that is not limited to its nuclear programme, but addresses its hostile activities, including Iran’s interference in the internal affairs of countries in the region, its support of terrorism, and to prevent Iran from ever possessing weapons of mass destruction.

Israel has opposed the nuclear deal from the start because we said that rather than blocking Iran’s path to a bomb, it actually paves Iran’s path to an entire arsenal of nuclear bombs, and this within a few years time.

The deal did not push war further away, it actually brought it closer.

The deal did not reduce Iran’s aggression, it dramatically increased it. And we see this through the entire Middle East.

As we exposed last week, since that deal, Iran intensified its efforts to hide its secret nuclear weapon programme. So if you leave all of this unchanged, all this combined is a recipe for disaster: a disaster for our region, a disaster for the peace of the world.