Italian markets showed no signs of jitters as coalition talks by Eurosceptic parties to form a government in Italy took shape on Sunday.

Italy’s FTSE MIB  was -0.7% down on the day at lunchtime on Monday and remained stable throughout morning trading.

Leaders of the League and the Five Star Movement confirmed they had finally agreed to a joint programme to form a government over the weekend, ending weeks of political paralysis after a 4 March vote failed to produce a parliamentary majority.

The announcement confirmed fears that Italy’s future government would be hostile to the EU and may lead the country out of the union.

It came after the parties spent days thrashing out the details of a common program that would see a fiscal loosening and increasing the budget deficit beyond targets agreed with the EU.

The issues up for negotiation included increasing the retirement age, raising government spending, cutting immigration and tax and implementing a universal basic income. 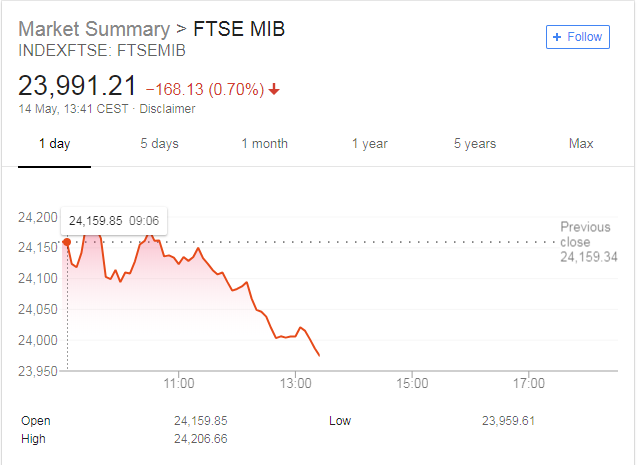 In a statement to Italy’s president Sergio Mattarella, the parties confirmed they were ready to put forward a government programme and would nominate a prime minister on Monday, local media reported.

In March Salvini’s League party won 17% as part of a right-wing alliance with Silvio Berlusconi’s Forza Italia party who together garnered 37% of the vote.

Although both the Five-Star and the League parties are hostile to EU budget rules, analysts say that under Italy’s constitution an Italian exit from the EU is “a long way off”.

While the League has pledged to leave the Eurozone as soon as possible, the populist Five Star Movement has distanced itself from calling for an outright exit, after the polls found a public majority favoured remaining, said Jack Allen, European economist at Capital Economics risk advisory group:

For now I am not that worried about Italy leaving the Eurozone, but it would be complacent to suggest it’s not a risk further ahead.

Both the Five Star Movement and to a lesser extent the League, have rode back on some of their anti-Euro rhetoric over the past year or so.

The Five Star Movement is officially no longer calling for a referendum on Italy’s membership of the currency union.

Despite Italy being the most anti-single currency country in the EU, a recent poll found that a clear majority of Italians want to stay in the union.

The economy has also recovered slightly in the last few years, despite performing badly by regional standards, which eases pressure on the incoming government.

That said, clearly these parties could change their minds again.

If economic growth slows and employment takes a nose-dive, the tide of public support for the euro could turn, he warned.

This coupled with the coalition needing a popularity boost could spark renewed calls to leave.

But even if the Five Star Movement did push for a snap referendum on the Euro, it could take years before such a vote materialised.

There are various constitutional limits on the government’s ability to hold referendums.

They can’t hold referendums on international treaties, such as leaving the Eurozone. So they’d have to change some laws.

A populist government in Rome could also make it more difficult for those who are calling for further integration of European countries and are seeking to push through future trade deals.