Italy’s populist parties are on the verge of signing a government deal. The leaders of the anti-establish Five Star Movement (M5S) and the far-right League party gave their approval to a joint policy programme.

This follows more than a month of stalemate over whether they would form a coalition government and what it would look like. However, Italians are still waiting for the parties to agree on a prime minister.

Having been approved, the joint programme was published today. Party members of M5S will vote online to show their support or disapproval of the deal throughout today. League members will be polled tomorrow.

If all goes well, the new coalition could take office early next week.

This government contract binds two political forces that are and remain alternative, to respect and achieve what they promised to citizens.

M5S and League are both Eurosceptic parties, but their outlooks differ strongly on many other issues. It has taken significant wrangling for them to get to this point, but the entente has done little to soothe the markets.

Italian ten-year bonds fell to their weakest level since last October, and equity markets have dipped as investors clamoured to sell Italian stock following the news of the coalition. 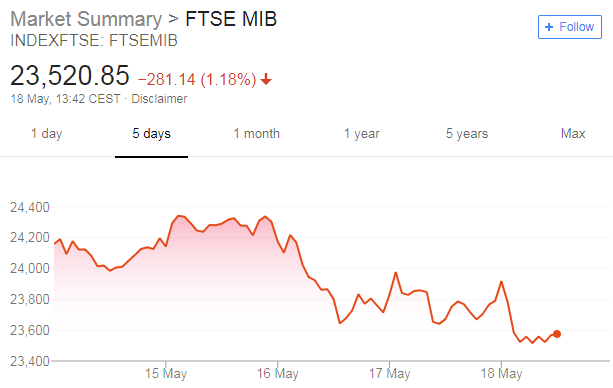