Signify, formerly Philips Lighting, has confirmed today that it has introduced its underwater lighting solutions for fish farms into the South American market, partnering with Australis Seafoods in Chile after several years of development, as the main provider of aquaculture LED lighting for its salmon fisheries.

The underwater lighting rigs, which produce up to 100,000 lumen, use LED bulbs to produce light frequencies that in turn allows farmers to better control and manipulate the growth of fish.

The food industry is undergoing a sustainability shift; this year we’ve seen the rise of plant-based alternatives in an effort to combat the carbon footprint of the meat industry, as well as advances in lab-grown meat. Urban farming concepts have also grown in cities in an effort to combat food miles, but one area of the food sector where we’re yet to see change is the fish industry.

According to the UN, nearly 90% of the world’s marine fish stocks are now fully exploited, overexploited or depleted.

Coronavirus case studies: How The Cocktail Service has boosted its digital marketing

Future of fishing: Controlling the seasons with lighting

The lighting system creates a specific blend of light frequencies, known as a ‘light recipe’, to mimic summer sunlight, and was showcased at Signify’s annual innovation day last week in Eindhoven, the Netherlands.

The technology has been in development for more than seven years, and is already deployed throughout Norway in Salmon fisheries.

By controlling the light conditions Signify claims that it can decrease feed costs, improve growth rates and lower stress and risk of infection in fish. What’s more, fish can develop ‘out of season’ during the winter months.

”We’re basically creating summer-like lighting atmospheres for the fish year round, which is very important because it calms the fish, and enables the production throughout the winter months at optimal levels,” said Bill Bien, chief marketing officer and head of strategy at Signify, during the Innovation Day.

Salmon naturally feed more and grow faster during the summer, so by maintaining this environment the production time is increased. 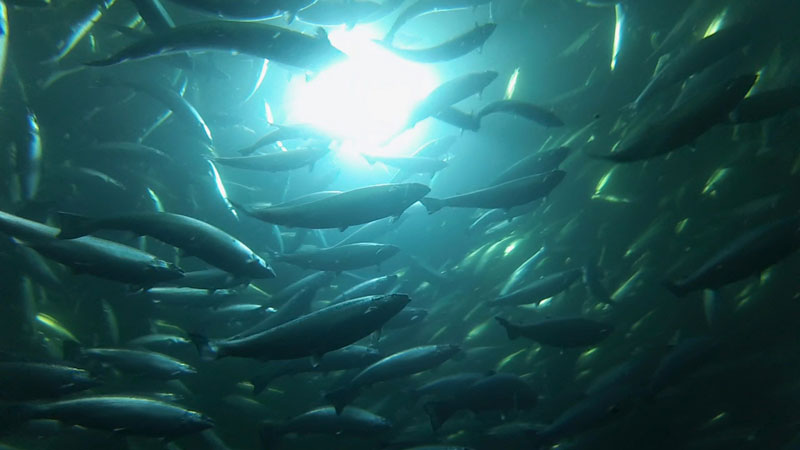 By keeping the fish calm and inducing increased summer feeding habits, Signify has seen an improvement in the feed conversion ratio – the rate at which feed relates to growth – by 10-12%. Bien puts this into context:

“In salmon production, usually feed consumes about 40% of the cost to the salmon farmer, so we can reduce that significantly.”

Signify claims that the savings and increase in production results in farmers seeing a return on the initial investment to set up the lights in one ‘salmon cycle’ which equates to 12-18 months.

The lights are submerged 5m in the water, which also leads to a lower risk of the fish being affected by sea lice – aquatic parasites that live in the top 5m of water. As the fish are naturally attracted to the light, they will tend to avoid surface water where the presence of sea lice is more common.

Signify claims that by following this method, farmers can reduce the need of sea lice treatment by roughly 40%, which further reduces costs.

The move into South America with Australis is just the next step for Signify, which is already working on research for the life cycle of Tilapia in hope of moving into the Asian market in the future; as well as looking at potential applications in Algae and Seaweed production.

Using lighting systems in salmon fisheries is not a new concept, having first been introduced in the 1970s.

However, the improved efficiency of LED light systems compared to traditional Metal-Halide lamps, as well as the ability to produce a specific light recipe, is a move towards sustainability and efficiency that fish farms will surely need to embrace in order to appease a growing consumer awareness of environmental issues.