While London has excelled at creating jobs and opportunities, it has failed to build an adequate amount of homes than its workforce can actually afford.

As a result, many Londoners struggle to get by, live in overcrowded properties and in unsuitable conditions. Home ownership isn’t even a distant possibility for many.

Scroll down for video

The housing crisis is a major factor in the high cost of living in the capital, as well as putting home ownership out of the reach of many young Londoners who fear they will never get a foot on the property ladder.

In the worst cases, it can affect social cohesion, cause poor health and plunge residents into poverty.

There are more people living in London than ever before. According to data published by the Official for National Statistics (ONS), London’s population surged to 8.8 million in 2017.

The population in the capital has been growing by 1.1% on average annually since 2012. This equates to 96,000 additional people each year.

However, according to the Greater London Authority’s Housing in London: 2017 report, just 20,030 new homes have been built in the capital each year on average over the last decade. 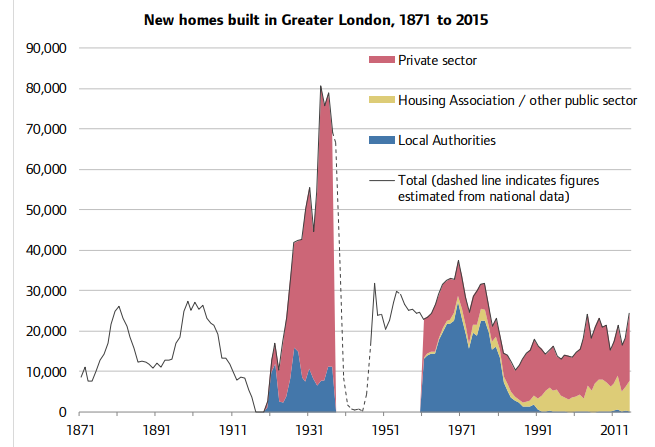 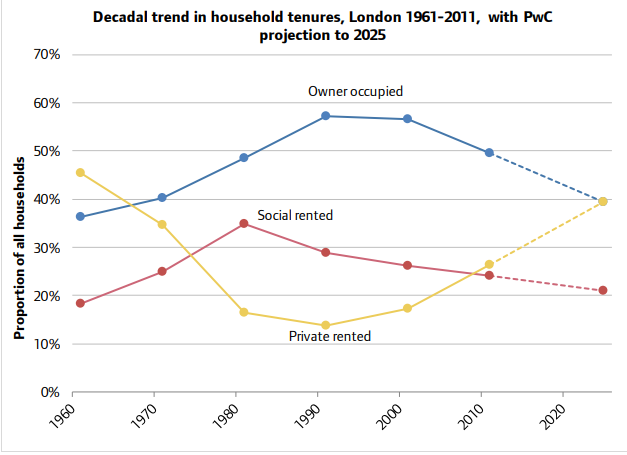 The report states that homelessness in the capital increased by 7% between 2015 and 2016.

Some 8,100 people are now thought to be sleeping on the streets. Likewise, the number of families living in temporary accommodation also saw an increase of 6% in the same period.

According to Khan, construction needs to increase to 66,000 new homes a year to cope with demand and solve the London housing crisis.

However, for many the problem isn’t a lack of housing, but the affordability of housing.

Of the new properties currently built in the capital, the government classifies just 38% of them as affordable. However, solving the London housing crisis will require 65% of all new builds to be affordable.

According to consultancy firm ECA International, London is the most expensive city in Europe for renting accommodation.

The company estimates that the average cost of renting an unfurnished, three-bedroom apartment in inner city London is £5,400 a month. This is compared to an average of £1,700 across Europe. This is more than triple that UK average of £1,400.

Cost of living comparison website Numbeo reports a smaller figure of £3,000 a month. However, this is still far higher than other major European cities such as Paris (£2,100) and Brussels (£1,300).

According to salary information website PayScale, the average London worker earns £34,900, or £27,900 after tax.

This means that it would take at least 17.5 years of saving (should you avoid spending on anything else, including food and shelter, in that time) to afford a London property.

A mortgage solves the need to save before you buy. However, this can still prove tricky for anybody that wishes to purchase a property on their own.

According to British bank Halifax’s mortgage calculator, one person earning that £34,900 average with no other financial commitments could borrow up to £165,800. HSBC’s calculator provides a similar £165,000 estimate.

This would be more than enough to purchase a property in Scotland, Wales, North East England, North West England or Yorkshire. However, in London it falls well short.

According to the Greater London Authority, the average price of property in London is five times what it was in 1970 when adjusted for inflation.

Likewise, data published by ONS shows the cost of a property in London has continued to climb by 7.7% on average over the last decade, having increased from £253,000 in 2009.

At the current rate, the average cost of a home in London will reach £1 million in 2028.

According to a study published by homeless charity Shelter, more than a million households across the UK are currently at risk of being evicted in the next two years due to a combination of rising rent costs, benefit cuts and a lack of social housing.

The lack of affordable housing is an issue across the UK, with the situation spreading to other major UK cities an investigation by the Guardian revealed.

Documents showed that none of the 14,700 new homes planned for development in Manchester will be affordable.

Likewise, in Sheffield, just 1.4% of approved new builds meet the government’s definition of affordable housing. In Leeds, 3.4% of 7,900 homes set to be built will be classed as affordable.

In order for the government to consider a house affordable, landlords must offer it as council housing or rented at no more than 80% of the local market rate.

There is a similar situation in some parts of the United States. San Francisco, California, has faced a shortage of homes since the 1990s as a result of the tech boom.

Like the London housing crisis, the wealthy have bought up all of the property, pushed costs up and priced the average person out.

Peter Cohen, co-director of the Council of Community Housing Organizations, told the Guardian:

Could this solve the London housing crisis?

In a bid to solve the London housing crisis, Ealing Council is turning to shipping containers as a means of providing easy to build, compact and affordable living spaces.