Margaret Atwood is one of the biggest name in literature at the moment.

The scribe of no less than 80 literary works, to say Atwood is prolific is an understatement. But it’s two of her older works that have propelled her to the forefront of the public consciousness.

The recent Hulu adaption of her 1985 novel, The Handmaid’s Tale received rave reviews from critics and fans.

The show scooped up dozens of awards at this year’s Emmys and became the first streaming series to win Outstanding Drama Series.

Avatar technology asks the question: Who wants to live forever?

Not to be left out, Netflix debuted a Margaret Atwood series of their own in October. The series, Alias Grace, based on Atwood’s 1996 novel, has also won critical acclaim.

Verdict interviewed Margaret Atwood about those two television series. You can read her thoughts on them here.

Still, for fans who’ve enjoyed those two projects, Atwood’s latest piece of literature is quite a departure. The piece, entitled The Martians Claim Canada, was published in Granta, a prestigious UK-based literary magazine.

The story is exactly what readers might guess from that title. It’s a short story featuring a trio of martians who descend to Earth and find themselves in Canada. The extra-terrestrials are on Earth looking for New York, where they hope to enjoy a musical. It is their belief that humans exist to put on musicals.

However, when the martians start a conversation with a local mushroom (martians can do that because… well, they just can!) they soon learn there’s much more to humans than putting on productions of The Lion King.

The story is, in essence, a deconstruction of human society. It wastes no time in breaking down and examining the way humans build a society, subjugate other societies, and then, after all is said and done, make the whole history in musical theatre. 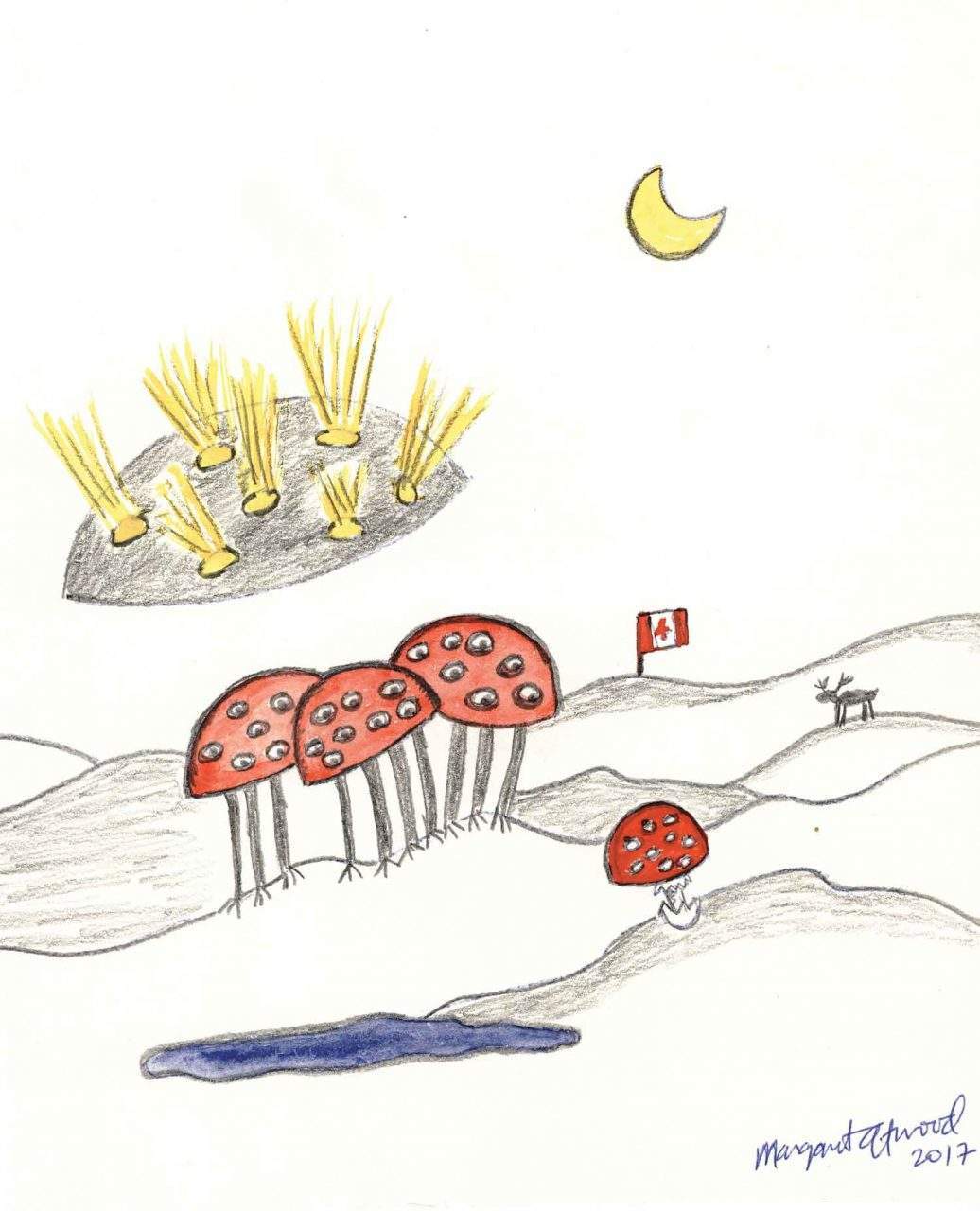 Readers can find the whole thing on Granta’s website here.

It is only a very short piece, totaling just over 2,000 words (about seven minutes reading time at the average pace.) Still, it’s worth a look: the story is just as hilarious as it sounds.

‘But what is a country?’ says the third Martian.

‘Yeah, sure, of course,’ says the first Martian. ‘Two legs, only two arms, strange-looking heads, only two eyes. You need them for putting on musicals.’

‘Okay, a country is an idea people get into their brains,’ says the mushroom. ‘Without people, there aren’t any countries. Mushrooms don’t bother with countries.’

‘I see what you mean about flags,’ say the Martians. ‘We should indeed concoct one for ourselves. But did they do musicals, these flag-waving people?’

‘Thing about people,’ says the mushroom, ‘first they have wars. Then, after a while, they turn the wars into musicals. It’s just how they are.’

‘What about the people who were already there?’ say the Martians. ‘The ones without flags?’

‘Things didn’t go so well for them,’ says the mushroom.

On mushrooms and musical theatre

‘They used to have,’ says the mushroom. ‘Once upon a time. They did a million musicals; mostly stories about themselves. Or about cats. None of them bothered to tell the story about us mushrooms, though. Why isn’t there Mushrooms: The Musical? There’s a musical about everything else!’

‘Mushrooms don’t sing and dance, to be fair,’ says the third Martian.

‘That’s no excuse,’ says the Amanita, sulkily. ‘Neither do lions, and look at The Lion King!’

However, as usual, the author makes it sparkle with her trademark wit and humour. It’s definitely worth spending a few minutes looking over.