Netflix have had free reign over the streaming game since their inception. Sure, Amazon Prime and Hulu have been on their heels, but no one doubts Netflix’s power in the streaming space.

Unfortunately, as is often the case with digital disruptors, the big players from last generation are circling.

Traditional media companies like Disney and Comcast are eyeing Netflix’s success enviously. Netflix’s success represents an upset to their dominance. And it seems very unlikely these big businesses will let that go unpunished.

And two massive developments in mid-December 2017 will shake up Netflix’s fortunes in a big way.

Firstly, there’s Disney’s takeover of 21st Century Fox. Purely from a content perspective, that puts Netflix in a difficult position. Disney already announced in August that it will be pulling all its content from Netflix.

This is due to the fact that Disney are looking to launch their own streaming service in direct competition with Netflix.

Now that they own 21st Century Fox, it seems incredibly likely that they’ll do the same with that content.

In fact, many analysts suggest that this might have been the whole motivation for Disney to buy 21st Century Fox in the first place.

Disney wants to launch a Netflix-like service, doesn’t have enough content to do this. Fox adds this. So yes, it is a threat to Netflix.

What’s worse is that they’ll have total free reign to show all those programmes on their own service, alongside The Simpsons, Marvel movies, every Star Wars film, and their own studios’ work.

All of that content provides consumers with a compelling reason to jump ship from Netflix to Disney.

In addition, Disney have confirmed their working on original series exclusively for their streaming platform, such as a live-action TV series set in the Star Wars universe. 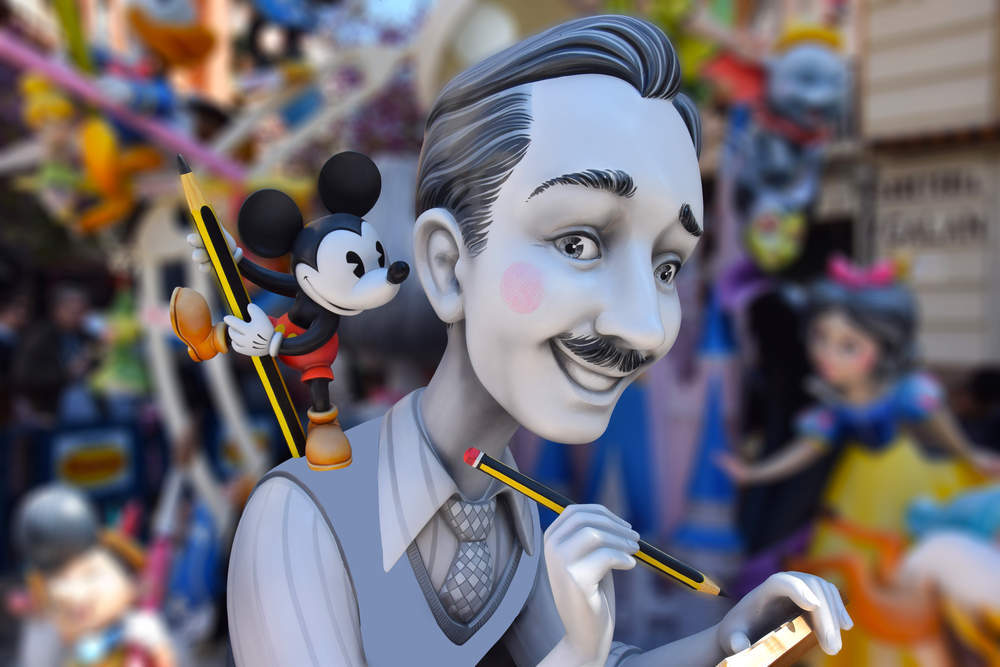 Disney Hulu-hoops around the competition

Of course, part of the reason why Netflix sits so comfortably as king of streaming is its brand. The Netflix name means a lot as the original purveyors of streaming content.

The Disney brand has its own connotations too. The assumption (and fear) of many consumers is that Disney is only for children’s entertainment. Convincing customers that Disney is broader than that will be the key to launching a successful new streaming service.

Disney already launched a streaming service with its own brand in the UK. This never really found mass-market acceptance due to its focus on the ‘Disney’ name and aim at a younger audience.

The obvious option is that Disney will sidestep the issue entirely by launching their service under a new name, seemingly unconnected with the house of mouse. However, this then creates the addition problem of how to launch a brand that consumers haven’t heard of, versus Netflix which is already known and loved.

For Disney, the key might lie in another part of their acquisition of 21st Century Fox. The buyout now leaves Disney the majority shareholder in Hulu, a streaming brand with serious pedigree and growing appeal (mostly thanks to its acclaimed adaption of The Handmaid’s Tale).

If Disney can somehow parlay their majority shareholding into outright ownership, they could relaunch Hulu with a wealth of content from both Fox’s and their own archives.

Hulu already has subscribers, name-recognition, and brand appeal. What it lacks is content. And that’s exactly what Disney can bring to it.

On the other hand, Disney could simply buy Hulu, take all of their content, and add that to its arsenal in the war against Netflix.

The second major impact on Netflix’s fortunes of December is the Federal Communications Commission’s decision to overturn net neutrality.

Net neutrality is, despite what some would suggest, is not an inherently complex concept. The rules essentially made the US government treat the internet as a utility, like water or electricity.

This meant that internet service providers had to treat all websites equally.

However, in central states this is less viable. In some communities internet accessibility is already patchy. Worse, there’s a lack of internet infra-structure meaning some rural users have only one possible internet provider.

All this might have some interesting impacts on Netflix. For starters, it’s worth noting that streaming content online takes up a lot of data. An internet company might decide that users should have to pay extra to use more data.

So charges for customers using Netflix might be increased compared to those who don’t use the service. Of course, Netflix bigwigs might decide to pay off the internet service providers to prevent this.

The question will then be whether or not they pass those additional costs to customers.

However, even if Netflix did decide to pay extra to maintain it’s speeds, there’s another issue.

Weeding out the competition

The biggest provider of broadband in the USA is Comcast. Comcast alone has well over 25.5m subscribers.

Comcast is the 4th biggest internet service provider in the world (it is first place in the Western world, only outstripped by Chinese companies.)

Why is all of this relevant? Because both of these companies have a conflict of interest here. Comcast owns a series of television and movie studios including NBC and Universal Studios.

Both of these companies make, or made significant revenue due to cable subscriptions. However, Netflix has cut into those profits as consumers choose to go for the cheaper, more easily accessible service.

It might end up making business sense for Comcast and Time Warner to slow down Netflix’s website.

This, in turn, could put off users and bring them back to traditional television where Comcast and Time Warner can monetise them once again.

It’s also worth noting that, like the Walt Disney Corporation, both Comcast and Time Warner have stakes in Netflix’s competitor, Hulu.

The pair could easily decide to slow down Netflix and speed up Hulu to make the service they own a better user experience.

Any consumer who has ever been so frustrated waiting for a programme to buffer that they’ve decided to look elsewhere knows what a pressing issue all this is.

Why aren’t Netflix’s investors freaking out about all this?

One of the most interesting things in all this is that Netflix stock hasn’t really been affected. While stock has taken a small dip in December 2017, it’s still at an all-time high for the service in general. 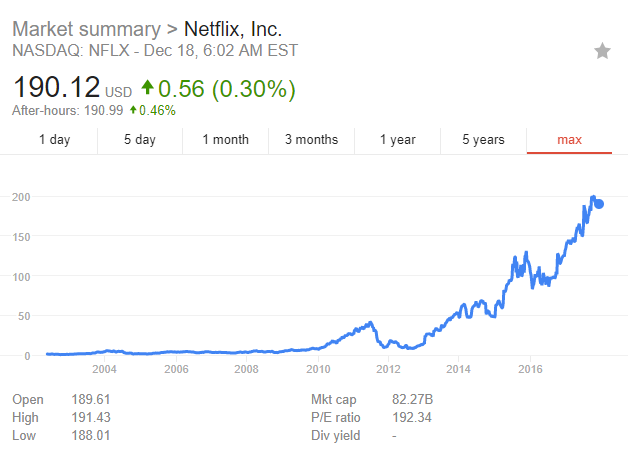 So why are Netflix’s shareholders so relaxed about all these threats?

Plus, he argues, these concerns aren’t new issues for Netflix:

“Fox has been moving stuff off Netflix to Hulu for a few years anyway, because of their stake in that company. Netflix has never paid a lot for their acquired content to begin with, and that has hit cable providers hard over the past few years as viewers move to online services.

“Online viewing has exploded quicker than anyone expected. At the time, it must have seemed like free money to the providers for their old content. Disney made their decision to put content on Netflix in 2011, but that decision didn’t come into power until 2015. By then it looked like a much worse deal.”

“The success or failure of Netflix is hardly contingent on Disney content. It’s detrimental to Netflix to lose Disney-related titles after their existing agreement ends, sure, but Netflix has plenty of other content to leverage.

“While Disney could certainly challenge Netflix more directly as it brings out its own direct-to-consumer offers… Netflix already has one, and it’s well-known, well-established and proven.”

In addition, Harrington raised the fact that Netflix has been preparing for this eventuality since they began. He explained that Netflix’s original content is their way of preparing for losing their acquired content.

The popularity of shows like Stranger Things and Orange Is The New Black is proof to Netflix investors that company fine on a content front. However, Harrington did mention that Netflix shouldn’t be resting on its laurels here.

As anyone with even a passing knowledge of Netflix will explain, the golden rule of the service is that do not disclose viewing figures. Ever. It just doesn’t happen.

However, Nielsen Media Research, the company that provides audience ratings and viewing figures recently released data estimating Netflix viewing figures. This data has not been made public but Harrington claims it shows that 80 percent of what Netflix users watch is acquired content, with only 20 percent of viewers time on the service being spent on original content.

If Netflix is going to lose all its Disney and 21st Century Fox content, those Netflix Originals will need more fans to keep the service viable.

Harrington also noted that Disney have already experimented with building a Netflix-style streaming service of their own. DisneyLife is available in the United Kingdom. However, the service ‘does pretty bad’, says Harrington, citing under 100k subscribers to DisneyLife in the UK. In comparison, Netflix has over 5.7m in the UK at the latest estimate.

Admittedly though, perhaps the reason DisneyLife has failed to take off is its focus on children. The service pulls together all the Disney content published under its own child-friendly brand.

Disney’s mature content is not available. Considering that the 20th Century Fox acquisition was likely done to bolster Disney’s content for adults, it’s debatable whether this is actually a fair comparison.

On the issue of net neutrality

The issue of net neutrality is, according to Harrington, even less of a concern for Netflix.

“Netflix have commercial dealings to ensure there’s never any interruption. They pay extra for that, so those deals are already in place. They’re likely to keep paying for that.

“They don’t want to annoy customers even further by restricting access to a popular service like Netflix. That’s what Netflix are banking on.”

Clearly, Netflix investors have a lot of faith in the company at the moment.

However, Harrington explains that investors might take a more critical look at things if something else goes wrong for Netflix.

If Netflix’s slight price increase causes them to start haemorrhaging viewers, then investors may start to panic. And if investors start to panic, then Netflix starts to look a little more shaky.

And if the streaming giant starts to look shaky you can be almost positive this month’s news is going to look very different to investors.