So far it seems Italy is the only region which Netflix is trialling this new package in. Reports from various users show the price for the ‘Ultra’ subscription package being charged at anywhere between €16.99 and €19.99 ($19.78-$23.27). That would make it slightly more expensive than Netflix’s current Premium option.

As the new package is still in its trial phase it isn’t immediately available or viewable by all Netflix users.

Presumably for reasons of search engine optimisation, various news outlets have started referring to the package as Netflix Ultra HD. However, to call it that distracts from the biggest issue in the new pricing strategy.

Why is it misleading to call the package a Netflix Ultra HD subscription?

The most important element of this new package is the content. So what do you get if you invest in a Netflix Ultra subscription?

Well, you’ll get access to Netflix Ultra HD and 4K streaming programmes, and you can stream content to four devices at once. Does that sound familiar? It should because all of that is already available to Netflix users around the world. It’s called Netflix Premium and has existed from the start.

However, according to leaked promotional material shared by streaming blog, CordCutting.com, Netflix Premium is simply being watered down so that Netflix can charge customers more for the same package they’re already enjoying. 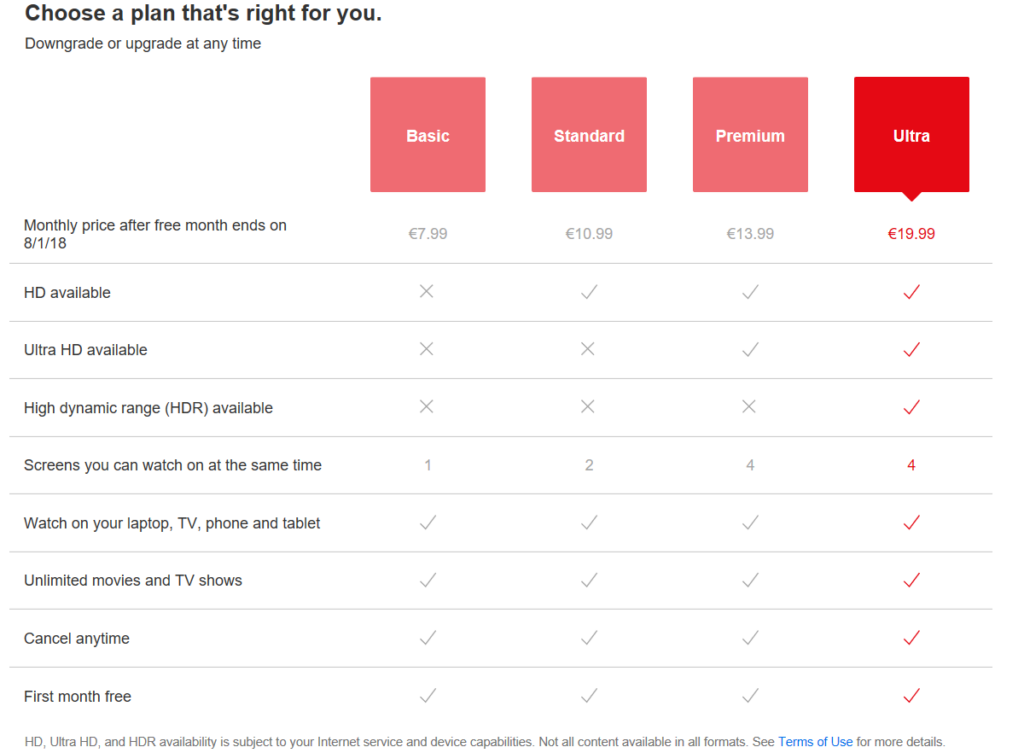 This screenshot also shows Ultra would include High Dynamic Range functionality. For the uninitiated, that basically means more vivid colours and finer detail in the shades in between. This gives images greater depth and brighter colours.

Essentially it seems that Netflix is downgrading Premium to only be able to stream to two devices at once. The knock-on effect means that the Standard package is downgraded to one device streaming at once.

In short, Netflix seem to be taking features away from current subscribers in order to charge higher prices.

What have Netflix said about the Ultra package?

Netflix did confirm that it is conducting tests in Italy to CNET, however, it stopped short of announcing a full roll-out of the package worldwide.

Smita Saran, a Netflix spokeswoman, said in an email:

“We continuously test new things at Netflix and these tests typically vary in length of time. In this case, we are testing slightly different price points and features to better understand how consumers value Netflix. Not everyone will see this test and we may not ever offer specific elements included in the test to our members.”

A spokesperson also revealed in an email to Verdict that over the course of the test, different users will see different options. This explains the disparity between reports. Some users are reporting seeing Premium downgraded to only allowing two screens. However, others (such as the screenshot above) show it will maintain its four-screen options.

The spokesperson also urged Verdict to point out that no decisions have been made about Ultra. There’s a chance Netflix may shelve the concept entirely or it may be rolled out with different features to the ones described above.

Ultimately, Netflix should probably beware of a potential backlash if it takes features away from some customers to charge others more.