Of ‘the big three’ gaming companies around at the moment Nintendo is by far the oldest. Sony only got into making consoles after a botched deal with Nintendo in 1991. Nintendo had already been in the gaming industry for 29 years by the time Microsoft got round to making the Xbox. Bless!

Having been in the gaming industry since 1973, Nintendo has quite the back catalogue. Did you know it’s been 36 years since Mario first appeared in Donkey Kong, one of Nintendo’s early arcade games? And Mario is just a tiny (albeit well-known) part of Nintendo’s industry pedigree.

Fans will know that Nintendo loves to raid their back catalogue to allow new fans to enjoy some of their older games. This comes in various different forms. The recent Metroid: Samus Returns, for example, is a remake of the 1991 game, Metroid II: Return Of Samus. Elsewhere, the Mario Kart series is known for including remade courses from older games in each installment.

For modern gamers though, Nintendo’s back-catalogue has mostly been available through Virtual Console. This service makes older games downloadable and has been a major draw for long-time fans. Unfortunately, so far, Nintendo has been fairly silent on whether Virtual Console will come to it’s latest console, the Nintendo Switch.

However, a new leak by data-miners could hint at what the virtual console service will look like on the Switch, and it’s a bit different to before!

Hackers have been looking into the internal data of consoles for as long as consoles have existed. They mostly do this to find ways of illegally modifying game-data or even playing games they didn’t purchase! Naughty, naughty!

However, some hackers do what they do purely for the joy of discovery. And this discovery is pretty freaking cool. In a random, unsuspecting 24kb file named ‘flog’ (spell that backwards) hackers have found a complete, working copy of the classic NES game Golf! which was first released in 1984!

The game works on the Switch which means that somewhere in the Switch’s data there is a perfectly working NES emulator. In theory, this means that the Nintendo Switch could easily run NES games. Unfortunately, the ‘flog’ file only contains an emulator which works for Golf! and nothing else, but still.

Every Switch in the entire world ever made contains the ‘flog’ file. Sadly, only Nintendo and very clever hackers can access it, but it’s still pretty cool.

But what’s even more interesting is that this emulated version of Golf! is compatible with the Switch’s Joy-Cons. Unlike emulators on the Wii which required a special, retro-controller, you can play this with the Switch’s own controllers. Okay, that doesn’t seem all that exciting, but this bit is: Golf! on Switch can be played using the Joy-Cons’ motion controller capabilities. You know the golf game on Wii Sports? Well, imagine an 8bit version of that, and you’ve pretty much got it. 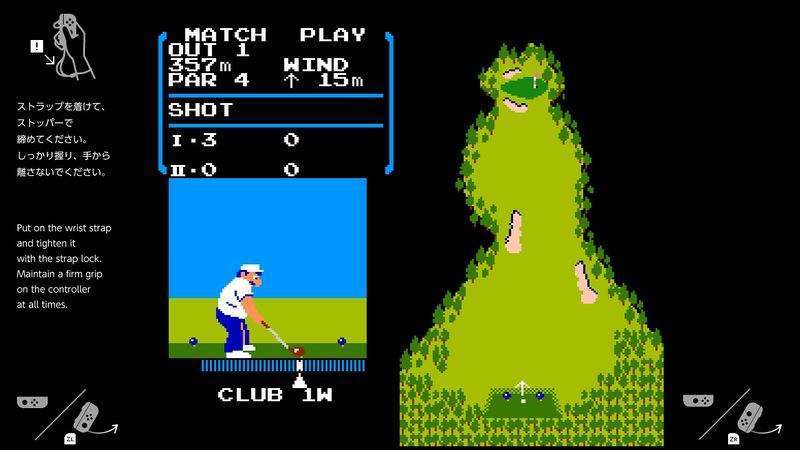 And that update is very interesting, because it could point to the future of Nintendo Switch games (or at least the emulated ones!)

What the discovery of the ‘flog’ file could mean:

Okay, let’s get the most boring (and probably the most likely) option out of the way first: Nintendo were just using Golf! as a tech-demo to test what they could do with the Switch and its controllers. They never intended to release it. It was just something programmers were playing around with. Stuff like that shows up in video-games and consoles all the time. It’s disappointing, but that’s most likely all this is.

But let’s be optimistic! Because this might be very exciting indeed! We have two major theories about what it could mean:

Back when Nintendo first announced the Switch, they also confirmed that a Playstation Plus/Xbox Live style online subscription was incoming. The service will cost $20 per year and you’ll need a subscription to play online in any capacity. However, as a reward to fans who purchase a subscription, a new retro game will be available to download each month you own your subscription. Nintendo did confirm when they announced this idea that the games would be updated with online capabilities including leaderboards etc.

The discovery of Golf! could hint that the games have been updated in other ways too. Might Nintendo be adding other features such as motion-control? Potentially.

2. A new vision for the Virtual Console:

The other option is that this version of Golf! is a precursor to a brand new Virtual Console. Nintendo’s sell-out retro-consoles, Nintendo Classic Mini: NES and SNES are already doing competent old-school emulation. And it’s obviously being lapped up by consumers. Maybe Nintendo feels they need to innovate to set the Nintendo Switch’s Virtual Console apart.

Perhaps they’re going back through their old game archive and sprucing up the classics with new control systems and the like, before they make them available to download. That could be the reason why the Switch has been available for over six months the Virtual Console is yet to appear: it takes time to update the games with new control systems. After all, the Wii had its Virtual Console at launch, the Wii U got it within three months.

Topics in this article: Gaming