Ocado’s long awaited international partnership with Casino is good news — for one thing it will add profit.

Shares in the UK’s only online specialist grocer have been subdued recently on concerns over shrinking basket size, inflationary impacts, and a lack of international deals.

Now, one of these fears have been allayed with the news of Ocado and Casino partnering, with shares are up around 20 percent after the announcement this morning. 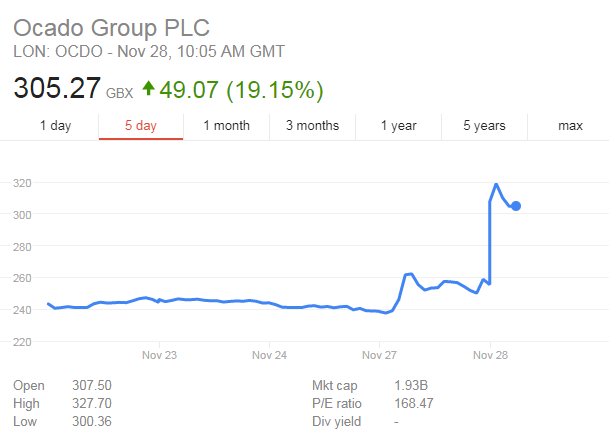 The deal will see Ocado provide all aspects of Monoprix’s (one of the Groupe Casino subsidiaries) online fulfilment, from construction of a new automated warehouse, as well as licensing its front-end website (as it does with Morrisons) and last-mile route management (as it does for Waitrose).

The first customer fulfilment centre will serve the Greater Paris, Normandie and Hauts de France regions, which are some of the more population dense areas of France, making the venture more likely to be profitable over time as delivery costs are inversely correlated with population density – especially for grocery due to the cost of chilling and freezing.

Changing the purchasing habits of the population will be easiest in urban areas with a younger, busier, and less traditional demographic, and Monoprix is a sensible place to start as its product offering is more on-trend and urban-based.

Additionally, Casino has chosen to start the venture with Monoprix as it has a higher margin offer, providing a more luxury, on trend, or organic product range.

As online costs are additional to in store; with delivery, picking, and technology investment eating into margins, the higher the already existing margin, the more likely the chance of profitability in the medium-term will be.

Casino expects to roll this out across other areas and businesses, depending on the outcome of the first venture, over time.

For Casino, this move marks the first serious entry into the French online grocery market.

Online grocery market penetration sits at just 3.1 percent in France according to GlobalData numbers and Casino ranks fourth in the overall French grocery market, so it has potential to grow market share through the currently under penetrated online grocery channel in the future.

Although France holds a lower online share than the UK (largely due to population density and the culture of buying more locally), the country is less restricted by the national pricing model.

Therefore, in regions which will be more expensive to provide delivery for, the price of products can be raised accordingly across the board rather than implementing a very high delivery cost, which is optically less appealing.

As the online channel grows the French grocery market will change significantly in terms of availability of product and retailer regional market share, which is much more variable geographically than the UK.

However, the deal is unlikely to change the relatively benign price environment in France – the discounters have taken less share in France, thus there has been lower price competition, and the more protectionist production and sourcing also means that currency and commodity fluctuations have affected France to a lesser extent.

At the same time as the Casino news came through, so did rumours of another Ocado international partnership with ICA, a Swedish supermarket.

The more international grocers that Ocado can secure, the more profit that can be incrementally added as they will allow it to leverage its technological, advisory, and supply chain capabilities.

Partners will pay for its expertise, and cover the cost of building fulfilment centres and allowing Ocado to grow margins and make the first materially profitable online grocery company.