Ocado shares rocketed on the news that it signed a partnership with the US supermarket chain Kroger.

Shares in Ocado, an online supermarket delivery service, soared by more than 43% in London this morning after the stock market opened. 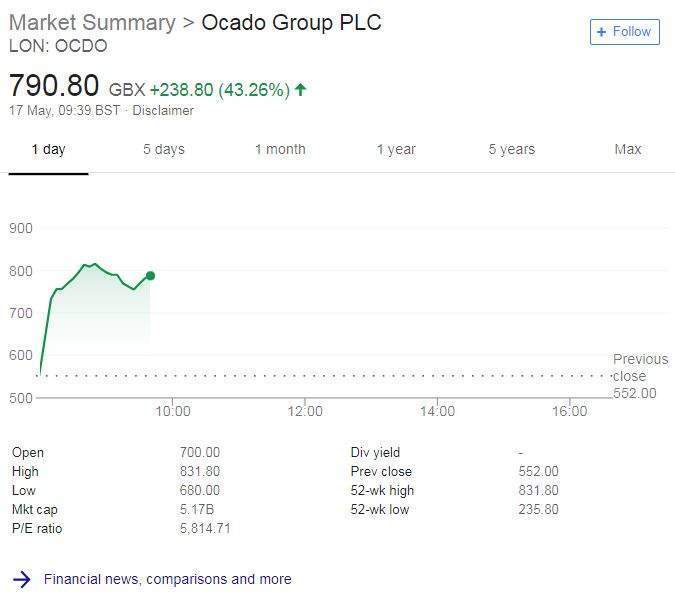 Some 7.2% of Ocado’s shares have been sold short by funds, or some 47.6 million of the 663.6 million shares currently in issue, according to short position data site Short Tracker.

Broker AJ Bell has calculated today’s 43% share price surge means those positions have cost the bears some £119 million in the opening minutes of trading.

Ocado’s fourth overseas technology partnership, with American grocery giant Kroger, is potentially the biggest of them all so far and this means more pain for the short-sellers who continue to question the lofty valuation attributed to the FTSE 250 firm’s shares.

The deal gives Kroger the right to use Ocado’s technology in the US on an exclusive basis, for grocery delivery and “other food distribution related activities”. In exchange, Ocado will receive monthly exclusivity and consultancy fees. Ocado will now stop talks with other US-based retailers.

This is not the first well-received international deal that Ocado has pulled off in recent months. It partnered with both Sobey’s (a Canadian grocer) and Groupe Casino (a French supermarket operator). Earlier this month Ocado also made a deal with to build the online grocery business for ICA, a Swedish supermarket.

Ocado, a British firm, supplies technology and robotic warehouses to automate the processing and packing of online grocery orders. In the UK it has an exclusive partnership with Waitrose to deliver their groceries.

The deal between Kroger and Ocado helps alleviate some of the competition after Amazon’s purchase of the grocery chain Whole Foods. Amazon’s departure into grocery delivery with its service Amazon Fresh challenged Ocado’s business model.

Ocado said that it believed Kroger, which had sales of £90 billion last year, was the grocer most likely to succeed in the US market. Time Steiner, chief executive of Ocado, said:

The opportunity to partner with Kroger to transform the way in which US customers buy grocery represents a huge opportunity to redefine the grocery experience of Kroger’s customers and create value for the stakeholders of both Kroger and Ocado.”

As part of the partnership, Kroger will take a stake in Ocado, equivalent to 5% of existing share capital valued at £183 million. Ocado has said that it expects the earnings impact of the deal to be neutral over the financial year for 2018.