Oil prices continue to climb, with Brent hitting $80 a barrel earlier today. Tightening supply, concerns over French oil major Total’s gas projects in Iran and growing demand have all helped push prices up to their highest level since 2014.

The price of Brent has risen by more than 50% over the past year, as Opec tightened supply and global oil consumption grew. US inventories of oil have also dropped sharply, reportedly falling by 1.4 million barrels last week, further fueling demand. 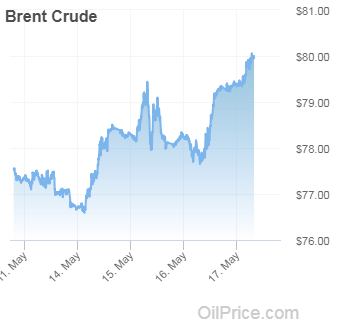 Today’s surge in price was also strongly related to President Donald Trump’s decision to withdraw the US from the Iran nuclear deal and reimpose sanctions on the country’s energy sector.

This has spooked oil companies working in Iran, such as the French energy giant Total, which is now concerned that it may be sanctioned too if it keeps dealing with the country.

Total announced last night that it intends to withdraw from its Iranian gas field deal unless it is specifically exempted from sanctions by the US. Total’s statement read:

Total will not continue the SP11 (South Pars 11) project and will have to unwind all related operations before 5 November 2018, unless Total is granted a specific project waiver by US authorities with the support of the French and European authorities.

If Total pulls out of Iran, other companies will be much more reluctant to invest in the country, likely fearing US fines if they do so. This suggests that the US pulling out of the Iran nuclear deal could eventually cause the whole thing to unravel, rather than just souring the two countries’ relationship. The shipping company Moller-Maersk also announced plans to withdraw from Iran today.

These geopolitical tensions increase the risk of supply shortages in the Middle East. However, the state-owned Chinese oil firm CNPC has indicated today that it is prepared to take Total’s place in the South Pars 11 gas field project, if necessary.

Total has said that if it doesn’t get an exemption from the United States to continue its work, it will begin to pull out of the deal.

If that happens, the Chinese firm CNPC will replace Total.

The rise in the price of Brent crude was mirrored in the price of US crude oil today, which is up almost 1% at more than $72 a barrel. US crude has risen around 70% in the last year and is now sitting at a three-and-a-half year high.