Online voter registrations for the UK general election climbed dramatically in the two days prior to the deadline, with young people driving the vast majority of the surge.

According to UK government data, which has been analysed by Verdict, online voter registrations on the last two days before the deadline, the 25 and 26 November, accounted for more than a fifth – 21% – of all digital registrations over the two-month recorded period, from 28 September to 26 November.

However, while registrations saw an uptick among voters of all ages, this was by far the most pronounced among the under 25s and 25 to 34 age groups. 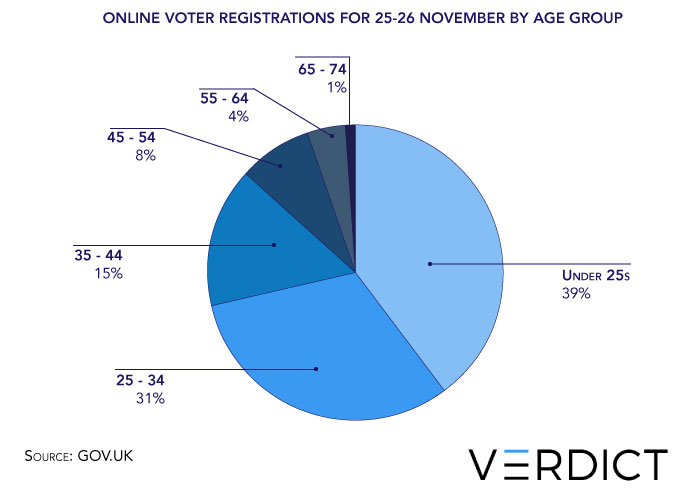 Young people also made up the majority of online voter registrations for the two-month period, albeit by a less pronounced margin.

The final day of registrations also saw the total number of online voter registrations break records, totalling 659,661. This tops the previous record, which was made ahead of the 2017 general election, when 622,398 people registered.

There has been a concerted effort to get young people in particular to register to vote, which this data suggests has paid off.

“There’s a real push, certainly, to get young people on the electoral register,” Cahir Hughes, head of the Electoral Commission in Northern Ireland, told the BBC yesterday.

The drive to get young people to register has been particularly pronounced among left-leaning parties that such voters are more likely to vote for.

This has been particularly notable for Labour, which could reap the rewards at the polls from this rise in young voters registering.

According to data from YouGov, Labour is currently 47 percentage points ahead among first-time voters ages 18 and 19.

Social media and the Stormzy effect

The rise in last-minute online voter registrations among young people has likely in part been due to concerted efforts by celebrities and others on social media.

Grime artist Stormzy, a vocal Labour supporter, urged his followers to register in a tweet on 25 November, which netted 54,200 likes and 24,300 retweets, prompting many to name him responsible for a dramatic climb in voter registrations on that day.

Other notable influencers have also encouraged their followers to register, particularly on Instagram, where many celebrities have used the ‘swipe up’ feature on Stories to link followers to the registration page.

Footballer Raheem Sterling is one such influencer who used this method, and also tweeted a call to register on the final day before the deadline.

Social media platforms have also taken their own steps to encourage young voters to register, with Facebook including a link within the site to register and an option that enabled users to mark themselves as having registered, which showed up on their friends’ feeds.

With the general election to be held on 12 December, we have just over two weeks to wait to see if the efforts to get young people to vote have truly paid off.