The Polish telecom regulator, UKE, is planning to auction the 3.4-3.8GHz bandwidth frequencies, which are dedicated to the construction of the 5G networks in Poland.

The auction would start by January 2020 and the bandwidth would effectively be assigned to mobile operators by mid-2020. The planned auction will cover four blocks of 80MHz each, with expected revenues estimated between PLN1bn (US$0.25bn) and PLN6bn (US$1.52bn).

The Polish government plans for telcos to launch their first commercial 5G services in 2020 and to extend coverage to all cities and transport routes by 2025. This is in line with the European Commission roadmap which requires the 5G network to cover at least one city from each member state by 2020, and all major cities and transport routes in the EU should be covered by 2025.

To stimulate for 5G services rollout, the UKE recommended the reduction of radiation levels limits to be applied to the base stations, as Poland has one of the most stringent electromagnetic field (PEM) standards in Europe. The Ministry of Digitization is aiming to reduce those barriers at the beginning of 2020, which falls just before the expected 5G rollouts.

The auction and planned 5G rollout are raising several security concerns with the government considering a ban on certain products from Chinese infrastructure vendors, especially Huawei. In any case, the government is opting to diversify its equipment vendors to reduce network risks. 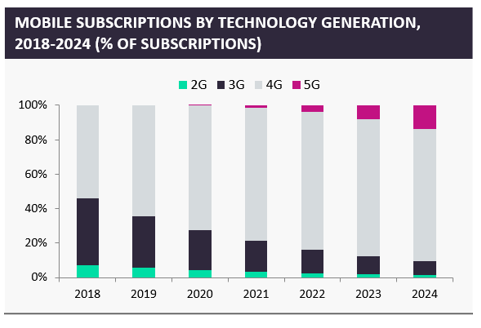