According to ANACOM’s decision, these key frequencies for mobile broadband services will be assigned based on the auction procedure as, according to the regulator, such an approach will be ‘objective and transparent’ for participants.

The planned auction will cover two key bands for 5G services deployment: the 700MHz and the 3.6GHz (3.4GHz-3.8GHz) bands. The range of frequencies offered is currently an essential range used globally in 5G network launches. Sub-1GHz frequencies (for example, the 700MHz band) are good for achieving widespread coverage. The 1-6GHz bands provide balanced benefits for coverage and bandwidth, as the latter grows with higher frequencies.

The upcoming auction will also cover the spectrum in other bands (900MHz, 1,800MHz, 2.1GHz and 2.6GHz), beneficial not only for 5G services but also for the provision of mobile broadband services on the other technology generations.

In December 2019, ANACOM signed an agreement with the National Association of Councils (Associação Nacional de Freguesias – ANAFRE) to support local communities’ DTT migration to a new band of frequencies, in order to release the 700MHz band for 5G services. The migration should start in February and will be completed by 30 June 2020.

With the regulator planning to allocate 5G spectrum in 2020, and major MNOs like NOS and Vodafone Portugal already engaged in technical trials, we expect commercial 5G launch in 2020.

In its Mobile Broadband market forecast for Portugal, GlobalData expects mobile 5G subscriptions to reach 5.3 million in Portugal by 2024. 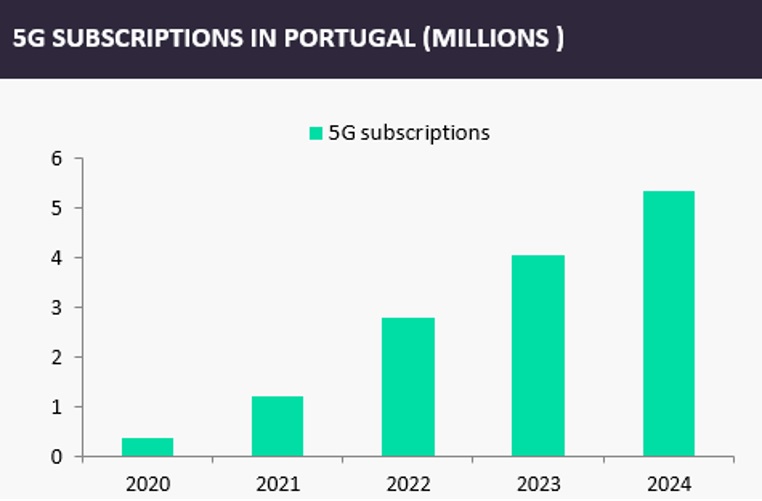