Premium smartphones have steadily increased in number across the US prepaid market in the last year. In Q1 2019, one out two prepaid phones was priced at $600 or more, indicating that the prepaid market has moved from an emphasis on budget phones to an equal focus on premium devices.

The year 2018 saw an influx of premium phones from Apple, Samsung and LG across prepaid. 2019 saw this trend continuing as Apple’s iPhone XR, XS and XS Max and Samsung’s Galaxy S9 series made inroads into the smaller price-sensitive prepaid service providers.

According to GlobalData’s US Handset Web Pricing tracker, premium smartphones have steadily increased in number across the prepaid market in the last year, with one out of two prepaid phones being a $600+ device in Q1 2019. This indicates that the budget-conscious prepaid market has moved from an emphasis on low-end phones to an equal focus on premium devices.

But the premium category of phones saw an upward swing only in the middle of 2018 when several older iPhones were introduced across prepaid carriers.  Apple realised it needed to get its phones in the hands of as many customers as possible—especially as it has begun to see its market growth slow, and by Q1 2019, six out of ten phones on prepaid shelves were iPhones.

There are also plenty of Android phones in the US wireless market. Samsung has a series of iconic flagships, such as the Galaxy S9, S9+ and Note9; LG has the V40 and the AI-focused ThinQ series, and Google has the Pixel 3 series (a Verizon Wireless exclusive). Samsung and LG also continually refresh their portfolios with new premium phones each year.

iPhones, however, are status symbols. Prepaid customers will likely stretch their funds to buy an iPhone over a less popular Samsung Galaxy Note9. Apple also offers a multitude of colour and memory variations for each iPhone, the large number of which dominates carrier shelves. Many of the secondary prepaid brands are also part of larger carriers that have iPhone sales quotas, which when unmet via contract sales, spill over into prepaid. 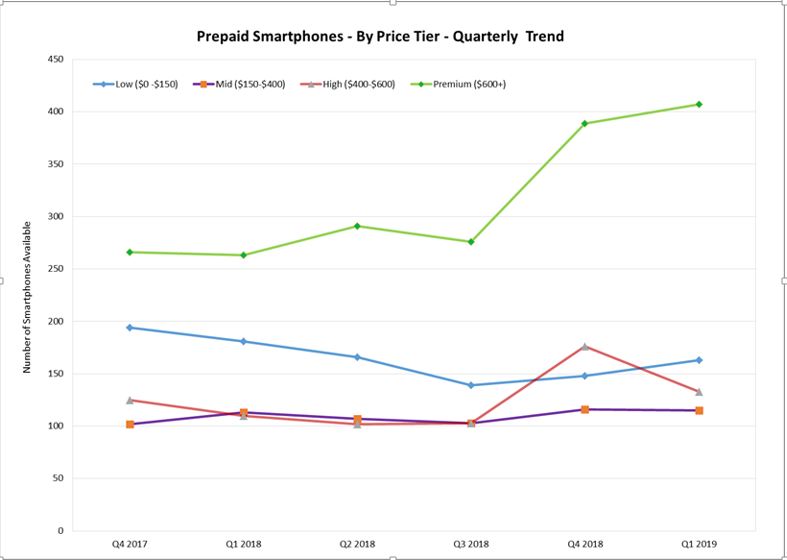 The influx of premium phones does not mean that budget phones are going away. Low-end phones will continue to remain popular in the prepaid market. But prepaid wireless services have now become a significant growth engine for US carriers.

LG and Samsung should capitalise on a previously overlooked segment of the wireless market, one that shows growth potential for both volume sales and margins. LG should bring in its G7 ThinQ at a discount to prepaid shelves, and Samsung should continue to discount its older flagships in addition to offering multiple color SKUs of its current premium phones to maintain a strong presence in prepaid, and poach customers from Apple.