We’ve all heard of shop-lifting. You know, taking something from a shop without paying.

However, you probably haven’t heard of shop-dropping. The name is a pun on shop-lifting and says everything you need to know. Essentially, to shop-drop is to add something to a shop’s stock, rather than taking it away. It’s kind of the exact opposite of shop-lifting, but the shop-owners might still not like it.

Targeting ‘fast-fashion’ retailers on the high street, Craftivist Collective snuck tiny scrolls into the pockets of clothes on the shelves. These ‘fashion statements’ contained messages asking customers to think ethically about how they consume fashion. One message was:

“If we are what we wear then shouldn’t we try to make sure that our clothes are made by garment workers who get paid well and treated with dignity and the planet is not harmed during the making of our clothes?”

So why this method rather than just standing outside the shop with signs? Well, founder of Craftivist Collective, Sarah Corbett thinks her method might be more effective. Speaking to the Guardian, Corbett said:

“We want people to discover the scrolls later on so that it’s intriguing. We hope that it might create genuine curiosity about how their clothes have been made.

“I genuinely love fashion, and during fashion week there’s a spotlight on the industry. I’d like to use that so we can think about how fashion could be beautiful on the inside as well as the outside.”

Unlike traditional forms of protest, craftivism places empathy, humility, and contemplation at its core. Craftivist Collective’s website notes that they may not be the fastest at achieving social change, but they aim to create change that lasts.

In a nutshell, the idea is that you can’t change anyone’s mind by shouting at them. However, you might be able to change their mind with a gently-delivered message that they can see you’ve cared about enough to craft personally for them.

Their manifesto is actually a super interesting treatise on the idea of gentle protest and it’s actually very convincing. 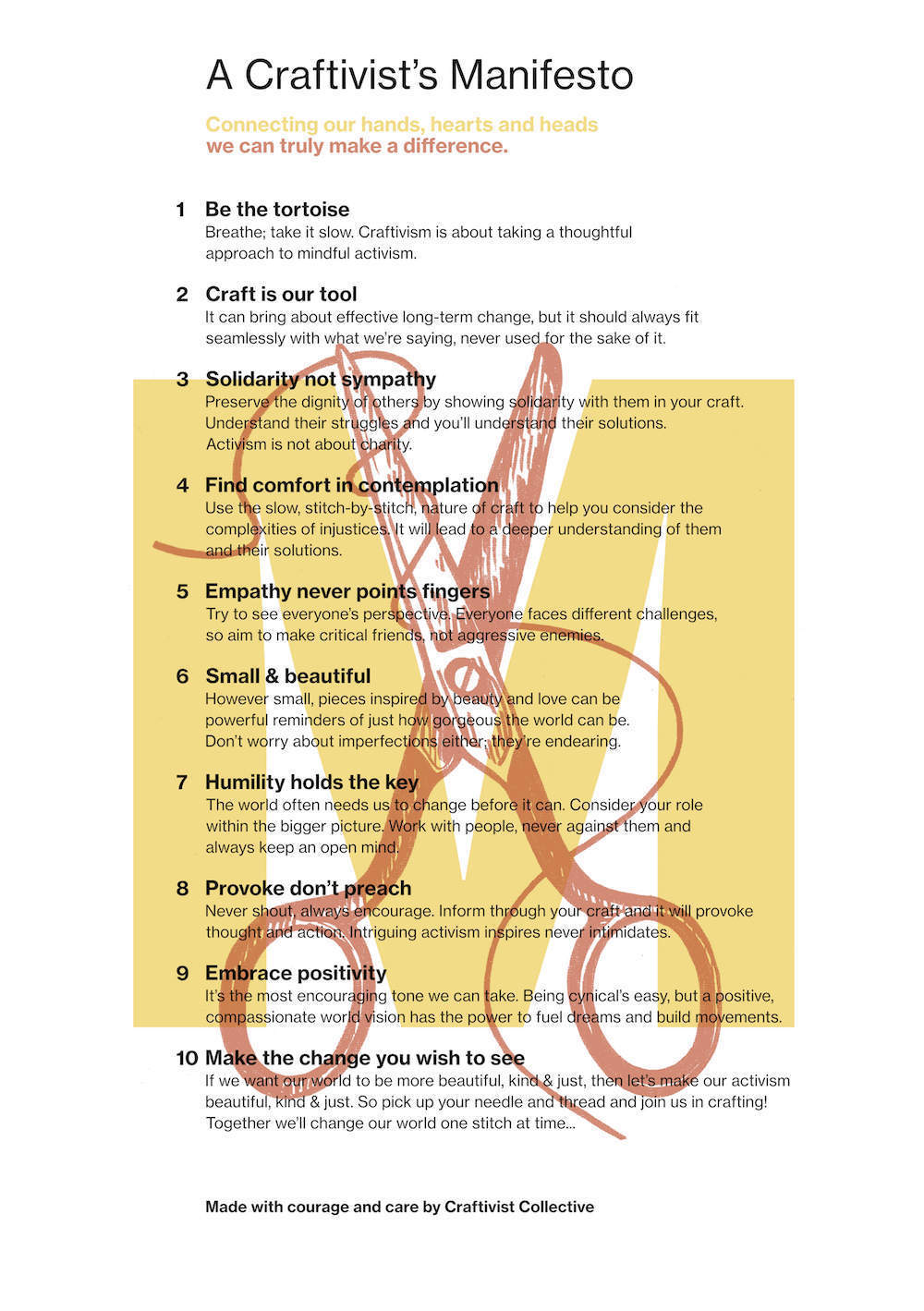 There’s evidence that this kind of protest works too! One previous success of Craftivist Collective was convincing the board members of Marks And Spencer to pay their staff a living wage. They achieved this by crafting hand-stitched hankerchiefs with their message on, and writing a personalised letter for each board member.

In a world where protests often end in riots and even deaths, this might be the refreshing change protesters need.

So far, there’s no indication that fast-fashion producers have taken heed of Craftivist Collective’s message. Still, this ripple definitely has the potential to become a wave every time someone finds a ‘fashion statement’.